All these stories on tax cuts today, and the New York Times is paving the way here for Democrats to raise taxes. The story: “Bush Tax Cuts Offer Most for Very Rich, Study Finds.” So this is the windup to allow the Democrats, the cover, to raises taxes out there. “Families earning more than $1 million a year saw their federal tax rates drop more sharply than any group in the country as a result of President Bush?s tax cuts, according to a new,” according to the Congressional Budget Office. You know what this means? (Raspberry). It means zilch, zero, nada. The rates, which were reduced from 39.6 to 35% have resulted in “the rich” paying an even bigger bite of the total federal tax bill than they were paying when the top rate was 39.6%, which the Times has to begrudgingly admit but deep in the story.
“Though tax cuts for the rich were bigger than those for other groups, the wealthiest families paid a bigger share of total taxes. That is because their incomes have climbed far more rapidly, and the gap between rich and poor has widened…” It has not, and we had the story last week. The gap between rich and poor has remained statistic for a number of years. It’s another myth that is out there. But so what if it has? When has it not? Where is the law that says the poor are supposed to be as rich as the rich? Would somebody give me that law of physics or economics or any other law? Somebody explain this to me. These are stupid presumptions made by a bunch of Marxist liberals, all for the purposes of exploiting class envy. Middle income, middle income groups, families in the middle fifth of annual earnings who had average incomes of $56,200 in 2004, saw their average effective tax rate edge down to 2.9% in 2004.

But that’s unfair. The rich are only paying 35%. That’s not fair. The middle class is getting 2.9%, that’s not fair, that’s okay, but 35% is unfair? You know, we have at RushLimbaugh.com on our home page all the details of who pays what in taxes — ad, lo and behold, the New York Times publishes it in this story. “The top 1% of income earners paid about 36.7% of federal income taxes.” The top 1% paid 36.7% of federal income taxes “and 25.3% of all federal taxes in 2004. The top 20% of income earners paid 67.1% of all federal taxes. By contrast, families in the bottom 40% of income earners, incomes below $36,300, typically paid no federal income tax and received money back from the government.” Despite all of these facts, in the New York Times, the headline: “Bush Tax Cuts Offer Most for Very Rich, Study Finds,” and that leads us to the House changing the rules, clearing the way for tax increases. One of the leftover rules in the House was that tax increases require, to this day, a three-fifths vote.
But the Democrats got rid of that. “One of the first key procedural votes in the Democrat controlled House last week established legislative rules that will make it easier to raise taxes now by a simple majority vote, by a straight party-line vote received little attention Thursday as Nancy Pelosi was elected speaker. But conservative tax cut advocates said that it opened up a huge loophole in a Republican imposed rule drawn from the 1994 Contract with America which requires a supermajority, or three-fifths vote, to raise taxes.” Now they can waive that with the vote of a simple majority. So essentially a simple majority is all it will take to raise taxes, and it’s has gotten no mention whatsoever in the reporting up until now, which takes us to Nancy Pelosi on Face the Nation again. Bob Schieffer, who was eager for tax increases because he’s an idiot, says, “You may have to raise taxes for some people in the upper income levels in order to cut taxes for some below there.” 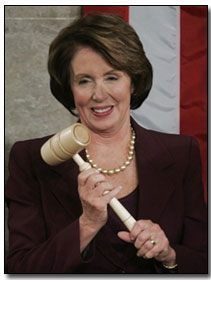 PELOSI: We’re not going to start with, uh, repealing tax cuts, but they certainly are not off the table for people making over half a million dollars a year.
SCHIEFFER: So they may — may see their taxes go up?
PELOSI: They may.
RUSH: Yeah, they may see their taxes go up! He’s eager, talking to the speaker of the House about taxes going up. There’s this thing called the presidential veto out there, Bob. Barbara Boxer was on Wolf Blitzer’s show and he said to her, “Are you ready to accept the president’s demand not to raise taxes?”
BOXER: I certainly don’t think we should extend tax cuts to people earning over millions of dollars. Ridiculous. They don’t want it. They don’t need it. We have deficits as far as the eye can see. Debt that we’ve never had before.
RUSH: Oh, come on! Cut me some slack. Give me a break. Debt that we have never seen before? We’re getting all these clich?s now. Deficits as far as the eye can see? Remember hearing that back in the Newt Gingrich years? Even in the Reagan years, that was a favorite Democrat refrain. Something else the Democrats are talking about doing is eliminating the tax exemptions that Big Oil gets, and a lot of Democrats in the Senate are worried that could end up raising prices at the pump. The Democrats in the House don’t care about that. They’ve just gotta get even with Big Oil, and they keep talking about a “windfall profits tax” on Big Oil. By the way, do you know the etymology of the phrase “windfall profit”? All these phrases, like old wives tales, they all have roots.
There’s a reason for all these things. Here is the explanation for the “windfall profit.” Apparently in colonial times, “the crown precluded the colonists from using any lumbar one foot or wider except whereby act of God, such as a severe storm, a tree falling on one’s own property. If that happened, the colonists could use the tree that fell down on their property during a storm or they could sell it for a significant amount.” So if you had a big storm on your property back in colonial days, and a lot of trees fell down, the resulting monetary reward was called “a windfall profit.” It was a good thing! It was a beneficial thing to a property owner, because they had limits on how much lumbar they could use but if an act of God came down and knocked a bunch of trees, well, they could use whatever they had. There were no limits on it and they could sell it or use it for their own construction purposes, hence windfall profit, a good thing. Look what it has become today.