RUSH: I’ve got a running transcript of Steve Jobs’ keynote address at Macworld, the Macworld Expo out in San Francisco, and they’ve introduced what many people thought was going to be the big deal today: the iPhone. It is an iPod; it is a Blackberry type device and it’s a telephone in one sleek box. It’s all touch screen, just like these Sony cameras, the digit cameras are very popular right now. In demonstrating the new iPhone, it’s got a single button, a home button, and it’s got one button. If you want to hit your voice mail, you hit the button, and it plays — and there was a voice mail message to Steve Jobs from Algore, who is on the Apple board. (Laughing.) Isn’t that cool? Algore left Jobs a message. Algore was part of the Macworld Expo today with a voice mail message on the new iPhone introduced by Steve Jobs. I don’t have a price for it or anything. I just had to scan this during the break at the top of the hour, but they claim that this is reinventing the whole experience. 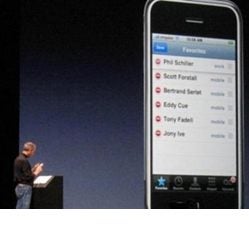 Jobs is saying he’s been more excited about this than anything the past two-and-a-half years, that this is revolutionize the phone business just as the Mac revolutionized the computer business and the iPod revolutionized how people listen to music, this device which will connect to the Apple Store, obviously, for music and video downloads. It has a three-and-a-half-inch screen with 160 pixels per inch, ppi. I don’t have, as I say, an idea on price, and this thing is still going on. It just started about 20 minutes ago. There’s a lot of announcements still yet to come.
BREAK TRANSCRIPT
I have here the latest on this new iPhone from Apple. Listen to this. This is the way the people transcribing Steve Jobs’ remarks going on now in San Francisco describe it: “The iPhone is a communications device. Rich html e-mail on the iPhone works with any POP or iMap e-mail service. It has the best web browser in the world, a fully usable Safari,” which is the Macintosh or the Apple, web browser, “on iPhone. Google Maps on the iPhone, widgets” which is something Microsoft is going to steal these again from Apple in their new Vista software, but weather and stocks, “it will communicate via Wi-Fi as well as Edge, automatically finds Wi-Fi and switches to it whenever you’re in a Wi-Fi network, such as a coffee shop or a Starbucks or a bookstore where Wi-Fi is available. iMap options are Yahoo, MS Exchange, and Dot-Mac.” It just goes on and on and on. It describes this thing as virtually everything your computer is, plus a telephone. What else? Yeah, it’s with Cingular. This is with Cingular Wireless service. Safari shows the entire website. They demonstrated the iPhone web browser with the New York Times page. “You can pinch and zoom on text or use gestures on navigate the page. If you double tap on a page, it zooms to that area of the page, or you can fully display the page on a three-and-a-half-inch screen. It goes on and on and on and on. Sounds like a pretty cool deal. I haven’t seen what it looks like, but that’s the big announcement, and there’s still more to come from San Francisco. In the Moscone Center where the Mac expo is going on even as we speak.