Screw the Babies, I Want My Hearing Back

RUSH: Tom in Nevis, Minnesota, you’re next on the Rush Limbaugh program. Hi.
CALLER: Good morning, sir. How are you doing?
RUSH: Just fine, sir, thank you.
CALLER: That’s good. My question about the stem fluid research is, exactly where do you stand? And the reason I ask this is because a couple months ago you were quoted as saying that it is your constitutional right to get your hearing back and you didn’t care about the abortion.
RUSH: Right.
CALLER: So…
RUSH: Yeah, I said that.
CALLER: I’m not against you putting down the Democrats. I don’t really care for them. I don’t like them at all.
RUSH: Let me tell you why I did that, Tom. The reason for it was, I was trying a new tack.
CALLER: Okay.
RUSH: To illustrate absurdity by being absurd.
CALLER: Yes?
RUSH: See, it was my theory that the Michael J. Foxes and the John Edwardses and all these other people out there running these ads, creating false hope, were engaging in selfishness, and they were promoting liberalism at the same time. They were promoting a liberal, big-government agenda.
CALLER: Right. 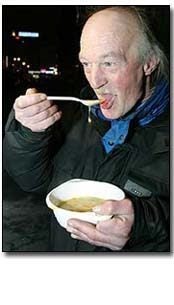 RUSH: But the ads were done in such a way as to evoke sympathy. They were very evocative. They evoked a lot of sympathy. “Ohhhh, why, that’s horrible! We’ve got to fix Parkinson’s,” and as Tom Harkin said, “Why, we can’t strip these people of their hope! We’ve got to have hope.” So I gave it my best shot, treating this in a rational, responsive, and reactive way to what I saw.
CALLER: Right.
RUSH: It didn’t seem to make much of an impression. So I thought I would become Michael J. Fox and John Edwards and anybody else doing commercials like this.
CALLER: Okay.
RUSH: I said to the audience, including you: Ladies and gentlemen, I’ve changed my mind. You know, I’ve lost my hearing, through no fault of my own.
CALLER: Right.
RUSH: I can’t hear. Without my cochlear implant, I can’t hear. I can’t hear music the way I would like to hear it. It’s tough for me to go out in public where there are lots of voices because I can’t communicate and I feel like an invalid, and I need hope that I can get my hearing back, and my doctors have told me that there might be a chance with embryonic stem cell research to restore my hearing, and so from this day forward, to hell with the babies of America! I want my hearing back, and I want embryonic stem cell research — and I was hoping that people would say, “Wow, that sounds cruel. Wow, that sounds selfish.”
CALLER: Yeah.
RUSH: To try to illustrate what I think advocates of embryonic stem cell research themselves sound like: selfish, mean, and self-focused. So I carried this on for two days. As is always the case, I’m so good at it, and I have so much credibility, that my audience — some of them, like you — believed it, rather than got my point. That was many months ago. I’m glad you called and gave me a chance to ‘splain this to you.
CALLER: Well, thank you. I appreciate that.
RUSH: Does that make sense?
CALLER: Yes, it does.
RUSH: You always have to keep something in mind when listening to this program. We do a lot of things sometimes to illustrate absurdity by being absurd.
CALLER: Right.
RUSH: We take the absurdity we see and turn it around and use it for our own causes to show people how ridiculous it is. I was just trying to portray myself as needy, unfortunate, a victim: it’s not fair I lost my hearing, and it’s not fair people are denying me my hope to get my hearing back, and it’s not fair; it’s not right that people are denying my doctors a chance to do the research that might give me my hearing back. Furthermore, I want you to pay for it because I am owed this. I deserve this. I didn’t do this to myself. This happened in six months, and it was gone. It’s not right, and to deny me my hope? So screw the babies! I want my hearing back. That was my attempt to illustrate how the libs in this whole embryonic stem cell argument are actually approaching it.