Smoking in Car with Kid Is Murder

RUSH: And more nanny state news, ladies and gentlemen: “The Bangor [Maine] City Council approved a measure Monday that prohibits people from smoking in vehicles when children are present. When the law goes into effect next week, Bangor will become the first municipality in Maine to have such a law. Similar statewide measures have been adopted in Arkansas and Louisiana and are under consideration in several other states. People who smoke with children present in the confined space of a car or truck might as well be deliberately trying to kill those children, said City Councilor Patricia Blanchette, who is a smoker. ‘Let’s step up to the plate and lead; our children are worth the fight,’ she said. The ordinance, which was approved by a 6-3 vote, applies to any motor vehicles on any public roads within the city. Violators face fines of up to $50.” 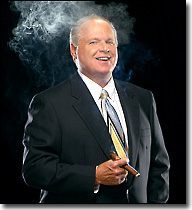 So if you think killing your kid’s worth 50 bucks, go for it, and if you want to, find a road that’s not a city road or a State Road and drive on that, and then they can’t do anything to you. Of course that might be problematic unless you build your own road. (sigh) Deliberately trying to kill children. Deliberately trying to kill children? May as well…? It’s insanity out there. This is just total insanity. Don’t you think, ladies and gentlemen, it is time to start banning the product? Isn’t it time to just take this product off the market? For crying out loud, secondhand smoke in a car is murder? That’s intentional murder? That’s first-degree murder? That’s exactly what they’re saying it’s doing. Cigarette smoke kills this, kills that. Secondhand smoke will kill your cat. It’s causing all this. You know, I was in California over the weekend. You’ve seen these billboards out there all over the country back when the deficit was supposedly scaring us all to death, the national debt, they had these running totals, national debt, and, of course, it was always moving, going up like a million dollars an hour or some such thing.
There’s billboard out there, I think it’s on Santa Monica Boulevard or Wilshire, I’m not sure which, but is a running tally of the number of smoking-related deaths year to date. When I got there on Friday, it was in the 5,000s. When I left on Saturday night, it was in the 7,000s. Smoking-related deaths. As I drove by, I said, “What is the purpose of this? Do the people behind this billboard, are they really concerned about people dying? Because if they are, ban the product.” Let’s talk about other ways you can die in this country. Cigarettes may kill you, but it’s going to take decades for it to happen. You can die today behind the wheel of your four-door family sedan! You decide to cross the street? You can get hit and killed. That’s instantaneously. What is behind this? Is it really a concern for people’s health? Why don’t we just take these smokers out and shoot ’em?
I mean, everybody is telling us, there was a proposal the other day somebody made: “If you are a smoker and somebody gets sick and needs surgery you go to the back of the line, because you brought it on yourself. Let people who don’t smoke have first dibs.” This is Britain, their socialized health care system. It’s gotten to the point, ladies and gentlemen, it’s irresponsible — in fact, it’s murder — on the part of elected officials to continue to allow tobacco to be sold. That’s what murder. They’ve told us for so many years that tobacco kills; it’s murder. Why don’t they ban the product? And what’s really behind these billboards tabulating smoking related deaths? Is it really about preserving life? Do they really want you to stop smoking so that you will live? I refuse to believe that’s their motivation. I don’t think that’s what’s behind this at all. I know the libs, and they don’t care about you.