RUSH: Stan in San Francisco. (You note that I’m delaying playing these Ted Kennedy bites because I really don’t want to hear them. I’m struggling here with: I’ve got the duty to play them to you and do I want to sit through ’em and listen to them, and I will probably opt to play some of them.) Anyway, Stan in San Francisco, you’re up, sir, welcome to the program.
CALLER: Thank you, Rush. Greetings from one of the 99 conservative Republicans in her speakership’s district.
RUSH: (Laughing.)
CALLER: There were a hundred of us until it was clear she was going to be speaker, and then one of them died.
RUSH: (Laughing.) And that was probably why.
CALLER: Yeah, oh, I’m sure. I wanted to get your take. I missed you yesterday because I was on an airplane, but I wanted to get your take on Schwarzenegger’s insurance plan for the world. 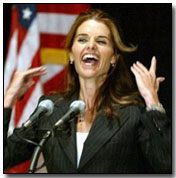 RUSH: She’s a Shriver, and Arnold’s in California. He’s been captivated by the fact that it’s a liberal-moderate state.
CALLER: Well, and she’s back at the compound now for a while.
RUSH: She’s back in the compound? Well, I’m half joking about Maria. I think this is predictable. If you’re not conservative, you’re going to become a liberal.
CALLER: (Laughing.)
RUSH: If an organization is not conservative, it will become liberal.
CALLER: Yes.
RUSH: That’s a profundity. It’s a philosophy. It’s not an assertion, not an opinion. If something by definition doesn’t strive to be conservative, it will become liberal. At any rate, there are two health care proposals. One is for health care insurance for every child in California, including those of illegal immigrants, and then the second one is health care for everybody. Isn’t that right? He wants universal coverage for everybody in the state of California. 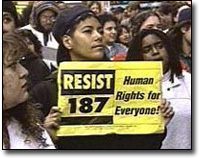 CALLER: Including illegal aliens.
RUSH: Yes. Yes, of course. Which, of course, the people voted down in Prop 187 but the judge said it’s unconstitutional.
CALLER: Mmmm.
RUSH: He’s gone green on the environment. All you have to understand about this is what Arnold said he wants to do next. He said he wants to take the best of conservatism and the best of liberalism and form a new ideology that contains the best of both and create this new centrist movement that takes the best from both liberal and conservative ideology. Well, when you compromise with a liberal, you become liberal, and that’s what’s happening here.
Look, I don’t know him. I’ve met Arnold, I’ve been around him, twice, three times, and I’ll tell you the first time. It was when they were opening, he, Bruce Willis and Sly Stallone — but he wasn’t there at that night, they were opening — the Planet Hollywood in Dallas, back in the nineties, and invited me down there. At the party before we drove over to the restaurant, it was at the hotel where they were all staying — by the way, Anna Nicole Smith was there and Charlie Sheen. Anna Nicole Smith, if she was a weather girl that night and standing on the East Coast doing the weather, you wouldn’t have been able to see California.

RUSH: She strolled in — in virginal white, and Charlie Sheen had a cigarette dangling from his mouth, and could not take his eyes off of her chest. He just stared dumbfounded. I figured, ‘Here’s a guy, Hollywood, has seen it all.’ He was paralyzed. Bruce Willis came up and told a couple jokes about Sharon Stone, which I can’t repeat, and then Schwarzenegger walked in, and he walked up to me and said (Arnold impression), ‘I love what you say about the Democrats, the way you screw them up,’ only he didn’t say screw… ‘The way you screw ’em up. I love what you said.’ Now, he could have been saying that just because he’s a politician and all that, but I got the sense that he meant it, and in the old days, Arnold was considered a pretty strong conservative guy, but now he’s become governor, and he had to get reelected, and I’m sure he’s had a dose of liberal compassion hit him, with this health care stuff and the environmental movement.

I remember I got into so many arguments with Californians for Schwarzenegger when I said — I warned ’em, I tried to warn ’em — ‘He’s not a conservative. He may be a good guy, and he may be a Republican, but he’s not a conservative,’ and they’d call me and give me grief on this program via e-mail and so forth. It was fun, but liberals are liberals, and moderates are moderates, and moderates are liberals. 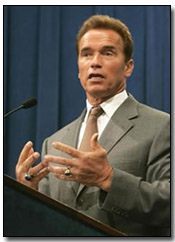 RUSH: Moderates become liberals. If you’re not a conservative, you are going to be a liberal. That’s why I say, ‘Moderates are not moderates. They are liberals.’ This is all going to have to be paid for, and I don’t know where the money is going to come from, and I don’t know that he does, either, really. I think it’s going to be interesting to watch. The liberals are not going to want him getting credit for this. They’re not going to want Republicans getting credit for it. They’re going to stand in the way of this. This is something that they have been promising to do since the Clintons were in the White House and none of them have done it. Here comes a, quote, unquote, Republican that proposes it and is apparently serious about getting it done. You watch, Stan. They will do what they can to object and stand in his way.

CALLER: Well, we’ll see what happens. The moderates, like you say, are just like those moderates we elected to the House who are going to vote with the liberals.

RUSH: Well, yeah. They say they’re not; they’re going to stand up to Pelosi, but they won’t. By the way, Mike, if you could grab that song, Mama Told Me not to Run? Stan, thanks for the phone call. I appreciate it. ‘Union leaders quickly balked at a requirement that all Californians have health insurance, calling it a tax on the middle class, a demand that all but the smallest businesses offer their workers insurance upset many of Schwarzenegger’s business allies.’ So union leaders — read ‘liberals’ — they don’t like this requirement that all Californians have insurance. When did unions ever care about a tax on the middle class or a tax on anybody, but all of a sudden they do now? It’s exactly as I told you, ladies and gentlemen. They just don’t want Schwarzenegger to succeed.

He said, ‘I look forward to everyone now having those debates. There are a lot of people around the table.’ Now, the way Mitt Romney required health insurance in Massachusetts is he’s requiring everybody to go out and buy it themselves, or to get it much like you have to have automobile insurance, and that plan has some workability to it, some possibilities. Schwarzenegger’s, I’m not quite sure if his whole coverage plan is that, but ‘to succeed with his plan to extend health care to 6.5 million uninsured Californians he’s going to have to find common ground for people who are at odds.’ I thought everybody was for health insurance for everybody! We got arguments now from unions are opposed to it?