Fix is in on Leak, Burglar Investigations

New York Sun today, Josh Gerstein. This is a really distressing story, and it confirms something, a suspicion of mine that I have held for many years. ?A lack of cooperation from one or more intelligence agencies led the FBI to abandon several recent criminal investigations into leaks of classified information to the press, records obtained by The New York Sun indicate. In January 2005, a top FBI official asked the Justice Department to close three pending leak inquiries because the ‘victim agency’ repeatedly refused to assist the probes. The FBI’s contact at the agency ‘has been uncooperative with the investigating field office and on numerous occasions failed to return phone calls or provide the case agent with requested documents.?

Now, let me translate this for you. We have all kinds of leaks to the news media and other places, many of them criminal in nature. The FBI began an investigation. The agency that was the victim of the leak, the agencies involved refused to participate. Now the FBI is saying, if they won’t participate, we got nothing we can do. There’s nothing we can do. If they won’t help us here, then there’s nothing we can do.
Now, this is stunning. I’m going to tell you, I have long thought that there is a shadow government operating in some things agencies that has been out to destroy this administration and its policies any way possible. Some of these people, they’re all career people, Clinton holdovers, and they’re at the top of these places. I think this is one of the reasons Porter Goss was summarily dispatched under cover of darkness because he was cleaning out the CIA, and there are a lot of people that don’t want the dirt of the CIA made public. So Porter Goss, after being promised that he would be able to hang in for the rest of Bush’s term, gone. He’s out and a lot of people looking at John Negroponte, who was the intelligence director as being one of the henchmen in this. Nobody knows that for sure.

What this means is, is that the victim agencies don’t feel corrupted. The victim agency, the agencies from whom these documents, secrets were leaked, they’re not worried about it. It’s almost as though they’re happy. They don’t want investigations into what happened because they already know what happened. They don’t want the culprit, they don’t want the leakers known or uncovered. They’re in on it. They have to have. This makes no sense otherwise. This is all about protecting the culprits. Folks, it’s become more and more obvious that there is a symbiotic relationship between these agencies — we’re talking about state, we’re talking about the Pentagon, CIA — there’s a symbiotic relationship between these agencies and the Drive-By Media now, and they’re not going to let an election get in their way such as the election of George W. Bush to be president. They’re not going to stand for that.
They’ve got their own agendas. It’s a left-leaning agenda and even if there’s a Republican president they’re not going to let that stand in their way. If they have to destroy the policies of a particular administration, they’ll do it via leaks, and then when these criminal leaks are investigated, they don’t participate, how else would you sum this up? What other explanation for this could there be? Joseph diGenova — this is later in the story, ?A former prosecutor who has accused career CIA officials of waging a leak campaign to undermine President Bush, Joseph diGenova, said yesterday that he suspected the resistance to the investigations was part of that effort. He also questioned why the leak cases were dropped. ?Stopping a leak investigation, assuming it’s a serious leak, just because the victim agency won’t cooperate is the most absurd thing I’ve ever heard in my life,? Mr. diGenova said. ?A grand jury subpoena should issue?.It seems to me there should be some sort of Congressional investigation of those instances.? 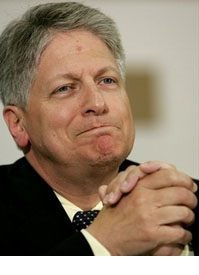 ?The disclosed records also suggest that many investigations into leaks of top-secret data are abandoned without pursuing some obvious, if intrusive, investigative techniques, such as seeking testimony or phone records from members of the press. Other components of the Justice Department have recently used those tactics in less sensitive cases, such as leaks about planned federal raids of Islamic charities and about a grand jury investigating steroid use in baseball. ?There is a stunning lack of balance in the way all these cases are approached,? Mr. diGenova said. They’re going after little chump change cases but the real big criminal cases involving leaks, they’re not interested in. The FBI didn’t even seem interested in following up, nor does the justice department by impaneling a grand jury and issuing subpoenas.
This takes us to the Sandy Burglar story. You know, I find this fascinating. Tom Davis and the Republicans on the government oversight committee released their report on Sandy Burglar after the election and after the new Congress is in power, when they are in the minority. The bottom line is that what we were told originally about Sandy Burglar is not complete at all. We were told, ?Look, it doesn’t matter what he did because the originals are still there, and with the notes on them. He didn’t do anything but make copies.? That’s not true. They can’t find some documents that were originals. They can’t find them. Also Burglar promised as part of his plea deal to take a polygraph test, but he’s never been administered that test, nobody’s ever given him that test. This is just like the leak investigation. Getting to the bottom of what Burglar did, nobody really seems interested in, even the justice department when it came time for punishment, little slap on the wrist.
If there’s ever a guy who deserves his security clearance being permanently denied, it’s Burglar, but he?s going to get it back in 2008 just in time to be part of another Clinton administration if that happens. So there’s an ongoing effort, and I have suspected it for the longest time, with all these leaks right before the Iraq war started, all the battle plans, all the war plans, the Joe Wilson and Valerie Plame thing, that still stinks to high heaven, the way that thing played out. By the way, nobody wants their book. Two publishers have turned down their book, and now they’re claiming that the White House or the CIA is trying to limit what they can say. That’s just a cover and excuse for the fact that nobody wants their stupid book. Their mission was accomplished as far as they’re concerned with the last election going to the Democrats, congressional and Senate races.