If you’re an American, Be Worried

There’s a column today in the Washington Post by David Ignatius, and it basically is a column about Rahm Emanuel and the Democrats and their strategery in moving their agenda forward, and I wasn’t going to talk much about it, if at all, because I actually have — I’ve already — repudiated what I think are some of the praiseworthy points that Ignatius has for Rahm Emanuel. I think the Democrats can totally botch their agenda with their base, which I’ve already touched on. Their base cares only about getting out of Iraq — and all the other stuff, especially the stuff with the 100 hours, is not going to mollify them. It’s not going to make them happy, if they don’t get us out of Iraq, if the Democrats in the Senate and the House don’t get us out of Iraq. That’s all they care about. As long as all these other things do not produce arguments, the minimum wage or whatever, the only thing that might arguments about stem cells, I’m talking about arguments with the president, but he’s pretty much made the case that Iraq is his baby for the remaining two years. 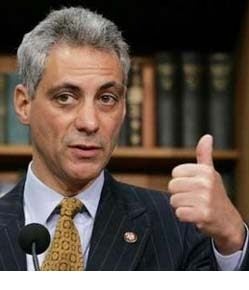