The Attack on the Childless 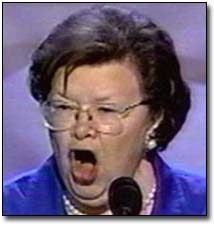 This is more and more of this effort by Democrats to disqualify people rather than debate them. Barbara Boxer was not interested in hearing a thing Condoleezza Rice had to say. She wanted to disqualify her as a credible source, and that was it, period, which is another tactic that you should learn to expect from the left because at what win these debates. They can’t win, and if they get into them, it doesn’t take long before they blow up and tart attacking people personally, calling them names, this sort of thing. The average liberal on this program cannot last longer than 30 seconds before descending into that kind of behavior. Now, there are some — and they’re rare, and we enjoy their conversations, but as I say, they’re very rare. As I say, one out of every 20 liberals, we end up having opportunity to talk to for longer than a minute or two.

BREAK TRANSCRIPT
I also got a note saying that Jack Reed’s wife just had a baby so he may no longer be childless in the Senate, but even without him there’s still five, and the idea that being childless means you cannot manage a war, means you cannot run the state department or come up to the Senate and defend administration policy on the war? I’ll tell you what, the liberals are coming up with new and more inventive reasons to silence people that they don’t want to hear, and you all ought to be taking note of this. I do, of course.
BREAK TRANSCRIPT