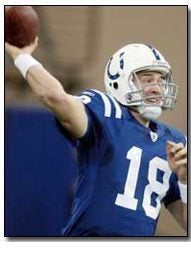 RUSH: A lot of people complained yesterday that in all the discussion of “24” we didn’t talk football. So let’s talk a little football. I’m going to make my Super Bowl prediction for you today, folks. The game will be between the New Orleans Saints and the Horses, the Indianapolis Horses. This scenario is just storybook stuff. For Peyton Manning, this is probably his last chance — maybe not his last, but he’s gotta get off the schneid here. Last chance here to beat the New England Patriots and Bradychick; he’s beaten them in the regular season but not the post season when it counts. They’re at home. They’re in the stables there at the RCA dome, and it will be the Saints over the Chicago Bears, and the Super Bowl is in Miami. This means that Peyton Manning and the Horses will return to the Super Bowl or go, for the first time, to play against a team his daddy played for from the city, New Orleans, which now represents America and Katrina victims. There is just too much destiny in this scenario. So the Indianapolis Colts, New Orleans Saints in the Super Bowl in Miami on February 4th.