RUSH: Snerdley, Cookie, I need to find something. I was just told by an audience member, the top-of-the-hour news, that the president has said that some independent body will now decide on whether or not we have the — if I understand this, an independent body will now decide whether we have the constitutional authority, the president has the constitutional authority to intercept phone calls from terrorists overseas to Americans in this country and vice-versa. Terrorists here, whoever is contacting terrorists. You know, the NSA, the so-called domestic spying thing. 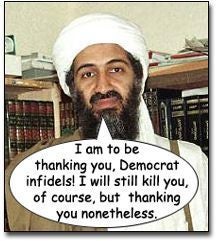 Now, I just got a brief blurb of this, going to try to track down the story because I haven’t seen it yet. If, with a capital I and a capital F, if this is true, this is inexplicable to me if some independent body, like blue ribbon — think 9/11 Commission, think independent blue ribbon commission is now going to decide whether or not there’s the authority to do these intercepts, the president is participating in weakening his own authority to act as commander-in-chief and to takes steps to protect the country from future attack. Regardless, if this is true, this won’t be good enough for the libs. I should refrain from comment until I get the actual details because I’m acting on very, very sketchy information. I’ll get the information to you and the details as soon as I can track it down.
BREAK TRANSCRIPT
RUSH: Ladies and gentlemen, it’s true. ?The Bush administration has agreed to let a secret but independent panel of federal judges oversee the government’s controversial domestic spying program, the Justice Department said Wednesday. In a letter to the leaders of the Senate Judiciary Committee, Attorney General Alberto Gonzales said the Foreign Intelligence Surveillance Court ?? wonderful, ?–and that it already has approved one request for monitoring the communications of a person?? This is pathetic! Pardon my anger. I spent the whole year last year saying this wasn’t necessary. The administration said it wasn’t necessary. It isn’t necessary; now all of a sudden we’re going to do it. This is weakening presidential authority. Throwing all this to the FISA court? The FISA court is going to delay all this. It?s all about warrantless wiretaps of known terrorists. I can’t tell you how frustrating this is. Just cave to every damn thing the liberals want. Let’s just get it done with it so we can start fresh. Just throw everybody to hell and start rebuilding from there. Give ’em everything they want, Mr. President. It still isn’t going to make ’em happy. This isn’t going to make ’em happy. This is blood in the water. All this is going to do is embolden them. This frosts me.
BREAK TRANSCRIPT