RUSH: This is just amazing. Folks, I cannot get away from it. I go to the e-mail during the breaks. I have the North Carolina mistress dumping on me for not doing enough of that to this candidate. I got other women, ‘You’re just dumping on our own! We have a saying in my house: ‘We don’t dump on our own.” She’s talking about another candidate. I’m getting dumped on by everyone out here for what I’m doing on the program. I’m not even going out with these people. The only thing good about this is I’m getting dumped on, and it’s not going to cost me anything, but still. (sigh) I’m just kidding. I’m just having fun with all this. You gotta understand, folks: I love stereotypical humor, when it doesn’t cost me anything. Yes, I know. I am so funny.

Mike in upstate New York. Welcome. Nice to have you on the program. Hello.

CALLER: Good. Love your show. I just had a comment to make as far as the GOP candidates running — the way they’re running their campaigns. They’re really… I mean, not one of them is really breaking out, and I think it’s because Bush really kind of fuzzied the lines as far as what a conservative is and what a Republican is and what a Democrat is. He ran as a ‘compassionate conservative,’ and really — which is redundant, by the way — but he really never was any other, and so today they’re having to compete against him, who really I think kind of clouded the waters as far as his belief system.

RUSH: Ain’t going to happen. That —

RUSH: It isn’t going to happen, because that’s going backwards. You know, Bush is not on the ballot. If there’s an era that is ending, it’s the Bush era, defined as his presidency. It’s not going to serve Republicans well to start dumping on Bush.

CALLER: Well, no. Not really dump on specifically in the most obvious way, but to really pinpoint his whole administration and the flaws he made where he really signed up with the Democrats, and what you do is if you take 16 years out of it from his last four to the first four of the Clintons, that’s gonna bring you closer to the Reagan era. So you really pick up the mantle from where Reagan left off to where the new GOP candidates are running today and say, ‘This is where we left off.’

RUSH: You mean run against the Bush record without mentioning Bush’s name?

RUSH: You mean the Republican candidates ought to run against letting Democrats write education bills?

CALLER: The only reason he won the second term –which was very close, by the way — is because of the war on terror, and he did a great job with that, and we’re winning, and we will win, probably not by the end of —

RUSH: All right, look. You are tough, you callers today, I have to tell you. You are forcing me to emote and articulate things that I normally would hold back at this stage. Now, I don’t think… Huckabee tried it and he caught hell for it, by saying — what did he say about Bush? He had an ‘arrogant foreign policy.’ You can’t. If you’re going to do this… I understand what you’re saying, but you can’t. It’s not going to make sense for Republicans to do that. I’m not saying they have to go out and specifically embrace Bush, but on certain things they can: taxes, appointments to the Supreme Court, national security. Here’s the problem, folks. Oh, this is so hard for me to say. This is just hard, and I don’t mean any of this personally. But I frankly believe that one of the reasons that we find ourselves in this current situation, where all of us are looking at this roster of candidates and trying to pick the one that we dislike the least, I think it is a direct result of the fact that there has not been conservative leadership from the highest levels, either White House or the Republican Party, since the year 2000. You have ‘compassionate conservatism,’ you let Democrats write the education bill. This is really, when you boil it all down here, we could really synthesize all these problems we’re having, to leadership. The American people will respond to it, Republicans, conservatives will respond to it.

We’re not getting any leadership out of the Democrat Party. We’re getting whining and moaning and trying to make everybody just feel rotten and miserable. On the Republican side, we’re really not getting any leadership. We’re getting policy statements and reactions to the premises that have been set by Democrats: global warming, health care, this sort of stuff. It really is just that simple. Had there been — and when I say ‘leadership,’ I’m talking about ideological. Certainly Bush has led on the war on terror, don’t misunderstand here, but I’m talking about ideological leadership. Most people are not self-starters. They want to be led and they want somebody in front of the movement who’s going to take ’em in the right direction for all the right reasons, and they’ll do anything for them. If you have a leader that you respect, you’ll go out of your way to get that leader’s respect. There just hasn’t been that. So if you want to talk about a quagmire, that might be a halfway decent way to describe circumstances right now. All this can change on a moment’s — well, not a moment’s notice. But leadership can surface as a result of certain instances or events that take place. But I think it really boils down to nothing more complicated than that, and when that’s absent, look what happens. You have all these people going off the reservation, their own ways, because there’s no discipline. There are no guardrails. So you got this disparate bunch of people, Republican and Democrat alike, that are just going like spokes in a wheel, and we’re not going anywhere. The wheels are turning but we’re just doing 360s, the way McCain steered his naval vessels.

RUSH: Fred Thompson on the Situation Room, Wolf Blitzer yesterday. Blitzer said, ‘Hillary Clinton says if she were president, she’d have a 90-day moratorium that there would be no foreclosures at all. No foreclosures over 90 days to help keep people from losing their homes. Is that a good idea?’ 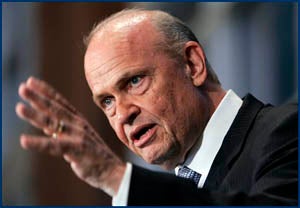 THOMPSON: No. I mean that’s totally typical Big Government, you know, drop money out of a helicopter kind of approach. You got to have sound economic fundamentals. Those who are paying taxes now who would have a moratorium on their taxes for a year at the lower income tax bracket, you know, that would be people who are paying taxes that you give a benefit to directly and a child tax credit, for example, as I talked about, you know, that would find its way into the economy right now. But if you’re going to squelch a particular part of the economy for a period of time, that pressure builds up otherwise. You’re going to create a bigger bubble in the future than you have now. It might sound good politically, but it’s not practical.

RUSH: You can’t freeze, what was it — no foreclosures for 90 days? Stop the market! Just put the brakes on the market, no foreclosures. Of course, we’re going to have to do something about this because this appeals to a lot of people. ‘Yes, stop those evil lenders from taking people away from their homes! Mr. Limbaugh, you just don’t understand the pain and suffering that’s out there.’ Right. Okay, so we’ll foreclose on you three months from now, not in the next 90 days. We’ll give you 90 days to run out on the mortgage, to leave the country, to leave the town, we’ll give you 90 days. You can’t do this kind of thing. It would wreck the mortgage industry. This is so fundamentally simple. Up next, Mitt Romney, Hannity &amp; Colmes last night. Hannity said, ‘Do you think Senator McCain is a conservative? Do you think he’s liberal? Do you think his policies are closer to the Democrats on many issues?’

ROMNEY: I believe that lowering taxes helps stimulate the growth of the economy and allows us to have more funds for government, and of course a lot more funds for the people whose taxes are lowered. So I supported the Bush tax cuts, he voted against the Bush tax cuts. He was one of two Republicans to say no to the Bush tax cuts. And at the time, what he was saying was, he was against them because they were a tax cut for the rich. And that’s exactly the wording that came out of the Democratic playbook. Now, he also, as you know, was coauthor of this bill providing a form of amnesty for illegal aliens. That I think was an enormous mistake. And, of course, I think for a while there, maybe I’m wrong on this, wasn’t he flirting with the idea of becoming a VP running mate of John Kerry?

ROMNEY: That’s not something I would contemplate to tell you the truth. McCain-Feingold I think was an enormous error. I’m sure it was done out of the best of intent to try and reduce the impact of money in politics, but, in fact, the influence of money in politics has gotten worse, not better.

RUSH: I’ll tell you, this business of intentions, I don’t even want to get into it. Examine results. Examining intentions is how we let the left get away with destroying the black family and other poor families with the war on poverty, and the Great Society. They’ve destroyed the health care system, or are on the way to with all of this stuff. ‘But their intentions, Rush, they only wanted to help.’ Yeah, they wanted to, but look what they ended up doing? The intentions of getting the money out of politics was so offensive from the get-go. Every time I heard somebody say, Senator McCain or anyone else, (Doing McCain impression) ‘We’re good people. It’s the money that’s corrupting us. Gotta get the money outta here. The money is corrupting, we’re good people! Get the money out!’ We have more money in politics every year than we had the year before. So it was the system that’s corrupting everybody, and of course people bought that. All this good intentions garbage. The intentions of this were to silence critics of incumbents. It’s exactly what the intentions were. Do they think we are a bunch of idiots? You cannot fool me, folks.