RUSH: Nancy Pelosi said that she will not block Iraq funding to stop the troop surge. Ditto, See, I Told You So, another one. El Rushbo calling it way, way back, meaningless resolution, nothing more than symbolism. They don’t have the guts to cut funding for the soldiers. We gotta keep this one for the archives, too. She was on Good Morning America today. Diane Sawyer said, ?On Iraq, as we sit here right now, 3500 troops are moving in. That’s the first of the surge. It’s begun. Are you going to move to cut off funding for troops going into Iraq as part of the surge??

PELOSI: Democrats will never cut off funding for our troops when they are in harm’s way. But we will hold the president accountable. He has to answer for his war. He has dug a hole so deep he can’t even see the light on this, it’s a tragedy. It’s a historic blunder.
RUSH: Democrats will never cut off funding? Well, then what the hell is all this rigmarole going on in the House and in the Senate, what is all this? It’s exactly as I told you, it’s total show, and it is fund-raising for these people, but it’s also illustrating their investment in defeat. Did you see the latest Fox News poll on this? You know, this will open your eyes I think. Here’s the question: Do you personally want the Iraq plan President Bush announced last week to succeed? Do you want to hear the results? The overall results are 63% of the American people say yes, 22% say no, and 15% say they don’t know. Now, let’s combine those last two. You basically have 63% of the American people who want the plan to succeed, and 37% who either don’t or don’t know.
Now, interesting, isn’t it, that Maurice Hinchey in the House of Representatives is running around on his Hush Rush tour for the Fairness Doctrine, and he’s out there, among the things he’s saying, is that the American people are not getting both sides, they’re just not getting both sides. How can that be, when in a lot of polls 60% of the American people are opposed to the Iraq war? How in the world can he say that the American people are not getting both sides? Even if you?re looking at this latest poll on the latest surge, 63% want it to succeed, 37 don’t or don’t know, where’s the lack of balance? What does he want, 80% opposing the war in Iraq? Is that what he wants? The idea that Americans are not getting both points of view is absurd. This is troublesome.
We have all these people in the country, ?We support the troops, we support the troops.? Yet 150,000 of them are over there, 20,000 more on the way, and only 63% in a Fox News poll want this plan to work? I.e., want the United States to win the war? Here’s the party breakdown. Democrats: Do you personally want the Iraq plan President Bush announced last week to succeed? Democrats 51% yes, 34% no, 15% don’t know. Republicans: 79% yes, 11% no, 10% don’t know. Okay, so only 79%, not even 80% of Republicans want this to succeed, and yet there’s an imbalance of opinion in American media? And the precious independents, ladies and gentlemen, those who tell us where we really are, 63% say they want it to succeed, 19% say they don’t, and 17% say that they don’t know. 49% of Democrats either want us to lose or don’t know. I wish somebody would tell me, from the Democrat side, and even this 20% overall and the 11% of Republicans who don’t want to succeed, can somebody explain to me the national interest in losing?

BREAK TRANSCRIPT
RUSH: Open Line Friday. Back to the phones to Renton, Washington and Bruce. Great to have you, sir. Welcome.
CALLER: Hey, Rush, mega dittos.
RUSH: Thank you.
CALLER: Quick point about this caring about the future because liberals want to stop global warming, manmade global warming. What would our war on terror look like if they had the same devotion to stopping that as they do something like global warming that they say is going to happen, what, 150 years from now, a hundred ?
RUSH: No, no, no. It depends. Nancy Pelosi says she’s going to stop it in ten years, which means we better stop it in ten years or we’re cooked. Others are saying we’ve got ’til 2030, Algore says ’til 2050, others are saying 2100, so the range is 20 to a hundred years or we’re fried.
CALLER: Right, but we’ve got two years for the possible atomic weapons in Iran, correct, give or take?
RUSH: Well, that’s something they may have now. May have them next month, may have —
CALLER: Right.
RUSH: We’re not quite sure about that, but certainly nuclear weapons in Iran, a likelihood long before — by the way, you know, this is interesting. This doomsday for global warming, when will they ever say it’s arrived? They can’t because it’s like racism can never end even though it does, or will, because then there’s no race industry.
CALLER: Right. But we have actual video footage of terrorism that already has arrived, and they’re not going after that with the same gusto.
RUSH: Well, no, that’s true. But, see, there’s a difference. We aren’t terrorists in the sense that we fly our own planes into buildings, but we are terrorists in the way that we’re destroying the planet.
CALLER: Uh-huh.
RUSH: It’s about American guilt. It’s about chopping America down to size. You’ve gotta understand who’s behind these movements, who’s leading them. The stragglers may not have any clue. In fact, most people, average people who get on the global warming bandwagon do it because they want to make a difference, they want to help. And of course the leaders here, they are the wild, extremist ideologues who have a total political agenda with this, and — 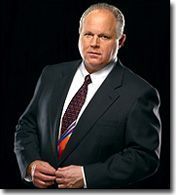 CALLER: Well, I understand that they’re trying — I understand what you’re saying but they’re always masking their global warming efforts under, ?We have to stop this for the future.?
RUSH: Right. But we don’t have to solve terrorism for the future.
CALLER: Right.
RUSH: Yeah, where’s the sense of urgency on a real threat to us?
CALLER: Right.
RUSH: Well, you know, it’s a great question. I’m trying to answer it in a way —
CALLER: I know the answer. I just wondered why it’s never put to them that way.
RUSH: Well, what is the answer then?
CALLER: Because they’re Democrats. They’re never going to be pinned down like that. Why are they never pinned down? They care about some things that may harm the future, but not others. Global warming, we have to act now, no matter how many zillions of dollars it costs. Terrorism, that could affect us in two years, don’t worry about it, we can pull out.
RUSH: Yeah. Well, nobody dares ask them the question.
CALLER: Right. That’s the whole point of what I’m saying.
RUSH: I gotcha. I’m so used to people looking for answers from me, rather than asking me a rhetorical question. Forgive me on that. That was a little arrogance and conceit on my part coming out, but it’s just a pattern. You were good. You corrected me on that. It is a good rhetorical question. But, of course, liberalism is a religion. It has articles of faith like everything else, and one of the biggest articles of faith is manmade global warming, and it overrides that and a lot of other ideological issues. By the way, some of these people think we deserve to get hit by terrorists. They need us cut down to size. We need to know what it feels like, what we’ve been doing to the rest of the world. Madeleine Albright, by the way, thinks it’s fine and dandy that these regimes get nukes because it will stabilize the world, and that it’s unstable to have a lone world superpower.