As you know, ladies and gentlemen, it was on Wednesday Hillary Clinton appeared on the Today Show. Let me recap my theory for you about it — because everybody’s been trying to figure — including me, what is this Obama phenomenon? What is it? It came out of the blue. I know there was this speech at the Democrat Party convention, and then he had this best-selling book and so forth. But this goes beyond that. My first theory was that he appears godlike to the godless and to the hopeless and to the thirsty, St. Obama, if you will. Still, how is this happening? Everybody knows that Hillary Clinton is the anointed one. This is her nomination. The Democrats have been building up to this for years and years. I think I finally figured this out. At least, this is a possibility. 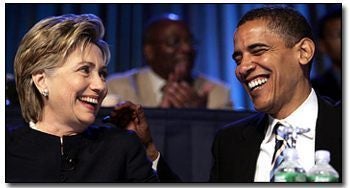 I think the Drive-By Media is engaging in a plan to build Obama up so that Hillary Clinton has something to overcome, an obstacle rather than just go through this appearing to be anointed with no competition. Front-runners don’t usually win things when they’re front-runners from the get-go. So you put Obama out there, you build him up, going into New York, making a play for Hillary’s people, she’s got a challenge now. At the right time, powerful forces will come together and descend on Obama and squash him like a gnat. It will be made to appear that Hillary has overcome this great obstacle and I think she’s being set up here for this, all part of some grand strategery. Obama, I don’t think, is part of it. I think he’s buying fully into this notion that he’s godlike to the godless. And of course we’ve got Hillary coming out now talking about her — according to Insight magazine — her team is interested in his Muslim background, and is he really a Muslim and hiding it from everybody? This is Hillary’s team doing this. This is not a bunch of Republicans saying this. They wouldn’t dare. They don’t have the guts.
Then we’ve gotten stories about how mainstream, traditional civil rights leaders such as the Reverend Jackson and the Reverend Sharpton do not find anything particularly great about Barack Obama because he’s really not one of them, born in Hawaii, educated in Africa, in part. So all these little rifts now are starting to show up, and Hillary was on Matt Lauer, Today show, and want to play this bite again with the Clinton war room zeroing in on Obama, and we’ve added — we played this Wednesday — we’ve added my conclusion that I added on Wednesday at the end of this bite.
RUSH ARCHIVE: Then Lauer said, ?Look, Senator Obama has announced he’s opening an exploratory committee. Is he qualified? He’s been in the Senate two years. Is he completely qualified to be commander-in-chief in your opinion??
HILLARY: The voters will make these decisions. That’s what’s so great about our system.
LAUER: But do you think he’s qualified? I mean, as a fellow Democrat, would you be comfortable with him in the White House?
HILLARY: I’m going to let all those decisions be sorted out by voters.
RUSH ARCHIVE: Meaning, wait ’til we get through destroying this guy ourselves and make it look like the Republicans did it. “I’m not worried about Obama,” she is saying.
RUSH: No, she’s not. She’s probably not worried about him at all, but of course it?s being presented that she is. Last night on CNN, The Situation Room, correspondent Jonathan King interviewed the Reverend Jackson, and he said to him, ?You say you’re inclined at this point to support the man who would be the next African-American in the Democrat field, Barack Obama??
JACKSON: It?s all in my heart, linked to Barack. He’s a next-door neighbor, literally. I think he’s extension of our struggle to make this a more perfect union. I’ll talk with all of them, but my inclinations are really toward Barack.
RUSH: Really? “It’s all in my heart, linked to Barack. He’s a next-door neighbor, literally.” Hmm. Barack has a strange real estate deal that is involved in the acquisition of some part of his property. Well, see, this is interesting, too, because now this is the civil rights leadership responding to the story out there that they don’t feel a connection to Obama. Next he discusses how dangerous it is for a black candidate. King responded, “And yet as Jackson shares memories of ’84 and ’88 with his friend, he also remembers the ugly side.”
JACKSON: There was such an antipathy toward my running. We received the most threats of any candidate ever. I had the most sensitivity to the fact that we had to have security at our home. The threats were very real. Every place we went, Secret Service was always on edge. And if you think it’s not real, if you think about what happened to John Kennedy and Bobby Kennedy and Dr. King, there’s the ever-present threat.
RUSH: It was said that Alma Powell, Colin Powell’s wife didn’t want him to seek the presidency for the same reason. Of course I don’t know if anybody’s ever made any movies threatening the assassination of Jesse Jackson or Barack Obama as they have about George W. Bush. I don’t know if anybody’s written any books about how to do it as have been written about George W. Bush. Well, at any rate, that’s the latest on Obama.
END TRANSCRIPT