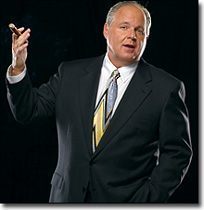 I mean, we’re all Americans. Only in America can anyone with talent and motivation become anything they want. Liberals and the media seem to think this is unusual for our country, because they don’t understand our greatness. They think this is actually unusual, that qualified competent people would have a chance to reach the heights. They think that a lot of qualified, competent people can’t reach the heights because certain powerful forces are constantly pressing them down. So when Obama emerges, when Hillary emerges, it somehow is a sign to them that America finally is ridding itself of the horrors of 200 years ago or 150 years ago, that finally something remarkable is happening in America — when something remarkable happens in this country countless times a day! We end up diminishing these people when we cast these labels on them based on race and gender, if you ask me, and we give them credit for things that denies the credit that they’re actually due: and that is the credit for their achievement and their accomplishments, such as is the case with Lovie Smith and Tony Dungy. 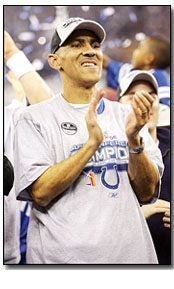 All right, here we go. Lovie Smith, the coach of the Chicago Bears. By the way, congratulations to Chicago and to Indianapolis. Those were great games yesterday. It’s going to be a great Super Bowl, too: the Horses and the Bears. Whoa! What an environmentalist wacko pick this is going to end up being. Anyway, I want to congratulate Lovie Smith and Tony Dungy. They are much more than the first… This is what I mean: they are so much more than “the first two African-American head coaches in the Super Bowl.” These labels, folks, are Balkanizing our society, and I just don’t like ’em. We are all Americans, and only in America can anyone with talent and motivation become anything they want, and the problem here is that liberals and the media seem to think this is unusual for our country because they don’t understand our greatness. I understand all the talk about how Dungy and Lovie Smith can be role models for young blacks, and, “Oh, now I can be a coach!”
Well, that’s fine and dandy. I’m all for that. I’m all for people having role models and having people to inspire them because everybody needs that, but the media and the left in this country, I’m sorry, do their best to beat down some other great role models such as Condoleezza Rice and Clarence Thomas. Why is it not also said by the same media that young black kids can run around America and say, “Wow, I can be a Supreme Court justice or I can end up being secretary of state like Colin Powell or Condoleezza Rice”? It’s because of liberalism. It’s pure and simple. Lovie Smith and Tony Dungy are great coaches, and they have been great coaches for a long time. They have been assistants. They have worked and toiled in obscurity. They are not where they are because they’re black! They’re where they are because they’re good. They competed, and they won. We all want to project — and the left especially wants to project — their racial views and social agendas into this, but that isn’t why they’re where they are.
Lovie Smith and Tony Dungy are in the Super Bowl because they were the best this year, as it should be. I think all these racial and gender labels cheapen successful people. If you listen to the media on this, Tony Dungy and Lovie Smith are going to the Super Bowl because some racial barriers have been broken down, and that’s not why! They’re going to the Super Bowl because they are the best. They’ve worked long and hard for this, and to somehow focus attention on their skin color, even if the attempt is in a positive way, cheapens them in my opinion, because it focuses attention on something other than their work. These racial and gender labels are also a sleight against a country that is the most open, free, and progressive on the face of the earth. This storyline is going to be around for the next two weeks, and one of the purposes of the storyline from the Drive-By Media, which will be promulgating the story, is that somehow, despite the odds and this racist, sexist, bigoted country of America, where we are all obsessed with guilt, finally two African-Americans are going to be coaching in a Super Bowl at the same time! 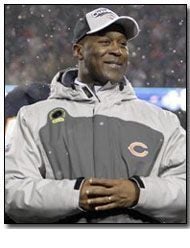 This is not the first time two African-Americans coach against each other in the National Football League. But this is the first time in a Super Bowl with this worldwide audience, and so the left and the media (and believe me, they’re one and the same) look at this as some sort of (sigh). What? I wouldn’t call it the Hope Bowl. I’m just saying they look at this as extraordinary. They look at this as, ‘Wow, wow, America may finally be getting its act together,’ when in fact the opportunity, the affluence, the ability to be whoever you want based on your ambition and desire has never — that opportunity has never — been greater that is not in the United States of America today. But the left, the media, act like we still live in a world of segregation and stereotypes, when for most of us it doesn’t even enter our heads.

They want to perpetuate a mind-set that most people in this country don’t have anymore: racist, sexist, bigoted, homophobe country! They tried this in the aftermath of Hurricane Katrina, too. People of all races and religions were contributing billions of dollars in charity and time, to help the people there regardless of color. The Duke Lacrosse story is another situation. These templates, these formulaic scenarios that the left has about what life in this country really is all about, based on — if we’re going to call this anything, not the Hope Bowl, this is the Guilt Bowl! In fact the presidential race in ’08 is going to be the presidential race of guilt. The country is on the warpath for guilt. We’re feeling guilty about everything, and so any of these stereotypes that make us assuage our guilt or feel like we’re assuaging it, well, then we’ll gladly get on board. The problem is we diminish the achievements of the people that we are objectifying on the basis of their gender or their race. Americans of all creeds, sizes, shapes, colors, religions donated for tsunami relief as well. The left out there, they defend illegal immigration by arguing among other things that these people only want to come here to work, and they only want to come here to better themselves.

Yet when they do, they act like there’s something unique about their success related to race! On the one hand the left will totally defend illegal immigration. ‘Well, these people are coming to my country and they’re trying to improve themselves, well, I am not going to stand in the way of anybody trying to improve themselves if my country can provide it,’ and yet, when those achievements take place, there’s something unique about it because of their race. It’s the same thing here with Lovie Smith and Tony Dungy. Whereas, everybody acknowledges the opportunity for success here, somehow we still have to beat ourselves up over the notion. ‘No, it’s really not a fair opportunity out there, ladies and gentlemen.’ I was reading something last night, before retiring to my comfortable Select Comfort Sleep Number Bed (sleep number 75) and it was a story on one of the sports websites about, well, Mike Tomlin has been hired as the head coach of the Pittsburgh Steelers. Art Shell got canned. Denny Green got canned.

So that’s two black coaches down, one hired and replaced, so we’ve got four head coaches in the National Football League out of 32 teams. Yet the tone of the story was, “We have so far to go. It’s a great start here, with Dungy and Lovie Smith as opposing coaches in the Super Bowl but we’ve got a long way to go. ” Nobody talks about the fact that 75% of the players in the NFL are black. Nobody talks about the fact that… What is the black population of the country? I’m talking about the media here, folks, now, hang with me. The black population of the country is about 10%, right? The adult black population. Okay, you have 32 teams in the National Football League. You’re going to have four head coaches who are black. That’s better than the national average! By the way, none of that matters to me. I don’t care if every head coach were black. It doesn’t matter to me. I love the game. I just want the best people owners can find running it. I want the best people owners can find playing it. 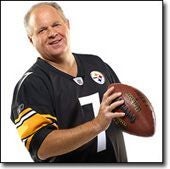 I want the best people owners can find being general managers. I don’t care about this, but the media is going to continue to hype this, even though we’re going to have four black head coaches in the league and a couple or three general managers, “It’s still a long way to go,” which is only going to reinforce the guilt that everybody is going to feel about this, and it’s problematic because in the end, it stigmatizes these achievers — and it says that what they really should be known for is their skin color, not their achievement! When I look at the careers of Tony Dungy and Lovie Smith, they’ve worked at places you wouldn’t want to go. I mean, little Dust Bowl towns learning to coach, finally getting their opportunity and making the most of it. You don’t hear Bill Parcells being praised as a great coach or Bill Cowher because they’re white or because they come from western Pennsylvania or New Jersey or any of that — and yet it stigmatizes these people. This has always been my problem with affirmative action. It replaces achievement with some sort of entitlement based on quotas of race.
You know, these coaches are great coaches — and they’re wonderful men. Did you notice both of them at the end of the games yesterday, first and foremost thanked God, as did the owner of the Indianapolis Colts, Jim Irsay? You’ve got two really class organizations here, and these coaches, by all accounts, do not use profanity in the locker room. In public, they go about it in a different way than what the stereotype is of a modern day coach, you know, hell fire and brimstone. They go about it a different way. They’re very humble people — and there’s a lot about them that if that were said, that would be the reason they’re role models! They’re decent people. Tony Dungy lost his son a year ago. His son committed suicide. He’s not the only one, but there are remarkable things about both of these guys that recommend them as terrific role models, and their skin color has nothing to do with it. You look at the stands during the football game, and the fact is that people pay no attention to race. They’re rooting for a team! They’re high-fiving each other. It’s not about race. It’s about winning — which these two coaches did.
END TRANSCRIPT