Why Mrs. Clinton Is the Anointed One

RUSH: You’ve all heard my theory as to why she’s the Anointed One. Let me run through it very briefly just because it has been confirmed right here in the UK Daily Mail. Here you’ve got this bright — supposedly, now, supposedly bright — up-and-coming star in her own right, Hillary Rodham from Chicago. She’s got those big Coke bottle glasses; she doesn’t care about her appearance because she is a serious woman — and she goes to Yale; she goes to Wellesley and she’s able to carve a career for herself on her own merits and she doesn’t need a man, damn it! She is the early dawn of the feminist modern reincarnation, and then what happens? At Yale she meets Him: Der Schlick Meister, and she makes a decision. “Well, this guy is going someplace. I think I’ll hitch my wagon to him, and wherever he ends up I’ll take over.” Well, the route required her to go to the outback, to the sticks, to the swamps of Arkansas — and when she did that, she had to become the primary breadwinner at the Rose Law Firm because her husband’s making 26 grand a year as governor and is out there finding all kinds of fun outside the house with Gennifer Flowers and who knows who else — and there’s Hillary with a stiff upper lip, and she hangs in. 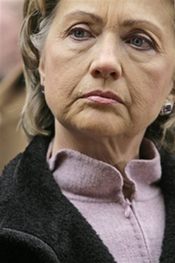 She knows all this is going on, but she hangs in. She makes it possible for this guy’s career to continue to prosper by making sure she remains solid with him. They leave Arkansas after two terms. The cattle futures was a little sop to her to going to Arkansas to grease the skids for her. She gets a hundred grand after investing ten grand then quits, which is what a lot of brainy investors do after that kind of return, just quit. Ha-ha-ha. She’s in Washington. She’s in the White House. She’s co-president, mangles health care. Hello, Paula Jones. Hello Kathleen Willey, and she still hangs in, and if it were not for her he wouldn’t have been able to accomplish what he accomplished. So she’s owed this now! She has eaten the excrement sandwich with no mayonnaise, no mustard. She has put up with humiliation as on a national scale that most women (except Jackie Onassis) couldn’t possibly understand and relate to. She’s owed this, don’t you understand? It’s her turn!
All right, a UK Daily Mail story by Sarah Sands. Headline: “Will Hillary Be Cheated Once Again? — An ability to apply hard work to a shining intelligence marked out the young Hillary Clinton for high public office. So when the high-achieving Yale student abandoned her own ambitions in order to help her boyfriend Bill fulfill his own political career, her best friend asked: ‘Are you out of mind? Why on earth would you throw away your future?’ Now, more than 30 years later, Hillary Clinton is trying to get her future back. The earnest young lawyer in bottle glasses is now 60 years old, a tough and glamorous New York Senator within sight of being the next President of the United States. This is her moment. Finally, she is poised to stand as the person she is, rather than as who her husband is. She has the record, the position, the money, the support, the right hairstyle at last. Yet the only quality she cannot summon, however hard she works at it, is charm.”

Well, you people may have laughed at my original theory, but here it is confirmed by no less than the UK Daily Mail. This is how the left looks at it, folks. She’s owed this. She put aside her own ambitions! She sacrificed herself for 30 long, humiliating years, and now it’s hers. This is the way the left looks at it. Mark my words, that’s the theory behind this. And just to show you how 180 degrees out of phase things are remember Nancy Pelosi when she took over the House, the swearing-in ceremony, out there with the grandkids on the knees and the kids in the chamber and the husband somewhere looking on, and Charlie Gibson, ABC News says, “Wow! Wow look at this! She can breast-feed; she can handle the problems with the grandkids and take care of the country at the same time.” He was in awe. This morning on CNN This Morning, Anne Kornblut from the Washington Post was on with Soledad O’Brien, and Soledad O’Brien says, “When you saw her at her first event [this is Mrs. Clinton] surrounded by children, it was some kind of health care event, surrounded by some children. When you look at her web announcement, she’s sort of on the couch, a lamp glowing behind her. How much do you think is how she’s going to picture herself in this campaign? Is this an overt pitch, sort of a mom vote, do you think?” 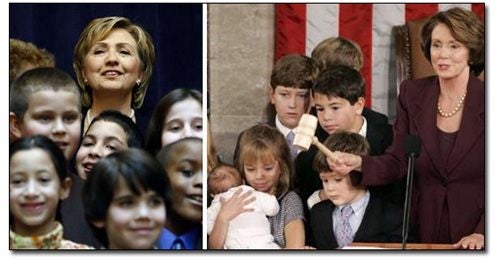 KORNBLUT: If you’d asked me that same question six months ago, I would have predicted that she would announce at a naval base or something, to do the sort of Margaret Thatcher tough-on-the-war thing. What we’re seeing now is actually not that different from what we’ve seen from Nancy Pelosi. It’s more of the sort of mom party. It’s showing that she’s a mother, that she connects with people.
RUSH: What must the feminists think, running for president as the mom, the mother of America? Of course, could it be the Queen Bee Syndrome that’s forcing her into this since Pelosi’s already staked out the turf as America’s Mom.