RUSH: I’ve told you that Mrs. Clinton, with her announcement, saying that she wanted this “national conversation” and so forth, all a replica of her New York state campaign for Senate’s “listening tour.” The whole thing is designed to make sure that she doesn’t get any questions, because she doesn’t want to answer serious questions. The press doesn’t ask her serious questions anyway. But she wants the focus to be supposedly on you. Yes, and what you want, and what you want to tell her, and then she can react to that, and she can control, by the way, which of you she appears before, and which of you she chats with and which of you she chooses to address and respond. It’s a totally captive audience. It’s a closed ceremonial type thing, if you will. Nobody that’s going to cause any trouble or be provocative will be allowed in these conversations. I have evidence here that the media already has lost their testicles in Hillary’s testicle lockbox, and you’ll hear it right after this.
BREAK TRANSCRIPT 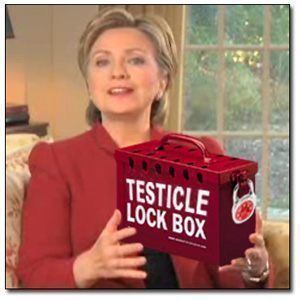 RUSH: All right, audio sound bites. We’ll start with a montage of the fawning of Drive-By Media anchors Charlie Gibson, Katie Couric, and Brian Williams talking about Senator Hillary Rodham Clinton. You tell me if these anchors don’t already have their testicle’s in Hillary’s lockbox.
GIBSON: Senator, I’d like to get your mission statement, if I could. You are a strong, credible, female candidate for president of the United States. And I mean no disrespect in this, but would you be in this position were it not for your husband?
COURIC: There are some people who say another Clinton administration, even if it’s a different Clinton, will feel eerily like Groundhog Day. What would you say to them? Senator Clinton, even those who approve of you as a candidate have questions about your electability, some of those people. What would you say to them?
WILLIAMS: Is it any kind of a burden for you, senator, that so many opinions are preformed? Americans know Hillary Rodham Clinton. Well, you’re one of the few alive who has seen exactly the journey that is ahead of you. I don’t know if that helps or hurts.
RUSH: Wow. By the way, that cackling that you heard in there, that’s Hillary laughing. Her laugh sounds exactly like this rare species in Arkansas that’s called the Arkansas broadbeam, and it shows up now whenever she speaks, that species seems to be around, and that cackling, well, I don’t want to say witch-like cackling, but I just — anyway, you see the demonstration here that we have done for you at the EIB Network. Those are fawning, really tough questions, really. Charlie Gibson may not get his testicles back for a week or two here with this question, ?Would you not even be here if it weren’t for your husband?? Because the fact is, Clinton would have never gotten where he got were it not for her, and that’s why she’s entitled.
BREAK TRANSCRIPT 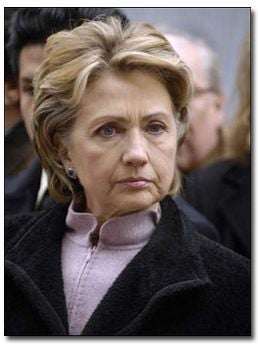 HILLARY: That was our plan, yes.
RUSH: Well, that’s really tough questioning. Repeat what she said as your next question. So you really planned to announce before the president’s — that was our plan, yes. Obama had nothing to do with it. Also last night, we don’t have the sound bite of this, but Brian said, ?Who is the real Hillary?? And then you hear that Arkansas broadbeam again, that rare species with that cackle. And she said, (paraphrasing) ?You know, I’m probably the most famous person in the world that nobody really knows.? I was getting ready for my guests to arrive when I saw this last night. I was testing the wine to make sure it was good and I spit it out when I heard this. Choked on it and spit. Nobody knows who Hillary is? (Laughing.) Don’t make me do it again.
You know, folks, not to make this personal, but I think I am probably the most famous person that nobody knows. Because what Mrs. Clinton ? (interruption) what are you frowning at, Brian? You know it’s true. I’m very famous. It’s the way it is. A lot of the people who know of me but don’t listen to this program, have an impression of me that people who do know me would not possibly understand or have. That’s why I say, ?I am the most unknown, famous person out there.? Everybody knows who and what Hillary Clinton is. That’s one of her problems. That’s why she doesn’t want to tackle issues head on because she’s just actually afraid of who she is in a political sense. Now, up next is Meredith Vieira, also at NBC, this on the Today Show. That was this morning, and her question, ?Why do people seem to have that perception of you after knowing you for 15 years??
HILLARY: What I’ve tried to do in New York and been very pleased that I could get such a great response from the people of my state was to say, ?Look, here’s who I really am. I may be the most famous person you really don’t know.? Draw your own conclusion. Don’t draw it from what you hear somebody say on, you know, radio or cable TV, draw your own conclusion, and that’s why I’m engaged in this conversation. You know, I started last night on HillaryClinton.com, a web chat and I’m going to continue it tonight and tomorrow at seven o’clock because I want people to see me in an unfiltered way.
RUSH: On the web! Not to put down the web, but she doesn’t want to reach a lot of people. What is this unfiltered business? Ever heard of cookies? There’s nothing unfiltered about that. And this business, ?Don’t draw it from what you hear somebody say on radio or cable TV.? Mrs. Clinton, grow up. Don’t start whining about this. Everybody in public life has to deal with defamation and people lying about them and saying things. Your problem is people tell the truth about you. But it’s just part of public life. She’s going to be one of the impeti behind the Fairness Doctrine being re-implemented if it really gets to that because she really thinks that talk radio killed her health care plan, and — well, I did, I did. There wasn’t too much talk. It was 1993, and there weren’t nearly as many conservative radio programs then as there are now.