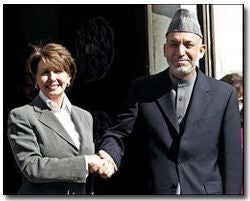 Well, if it was not a stunt, but a search for new insights. But she doesn’t want any new insights. She came back from Afghanistan — listen to this headline: ?Pelosi, Karzai Discuss Troop Increases.” Wait ’til Sean Penn hears about this! ?The Afghan president told house speaker Nancy Pelosi that his security forces need to be stronger as the two discussed possible US troop increases on Sunday, days after the Pentagon extended the tour of 3200 soldiers. Hamid Karzai stressed his desire for increased training and equipment for Afghanistan’s fledgling army. Pelosi and Karzai discussed plans announced last week by the Bush administration to ask Congress for 10.6 billion for Afghanistan.?
When she met with Maliki in Iraq, she didn’t even bother to tell him of the status of the resolution. She said, ?I don’t need to tell him the status of the resolution. He knows, he can look at the election results here, he knows what’s going on in this country, I didn’t have to tell him this.? But I think Mrs. Pelosi should tell us, what opinions did she have before the trip? What did she learn on the trip, and how, if at all, this new information has changed her mind. Now, don’t hold your breath on this, folks. You’ll die. Because this will not happen. By the way, on Sunday, Speaker Pelosi was in Afghanistan while at the same time Prince Charles was in the United States in Harlem. Now, here’s the question. Did Prince Charles learn as much about our inner cities as Ms. Pelosi learned about Afghanistan’s outer cities? I think this is the grim reality. The trip was a photo-op. It was a trip that attempted to build credibility and it’s a hedge in case the mission succeeds. She can claim it was her pressure that turned the trick. That she went over, she met with these people, that they opened up to her and this sort of thing. But you know darn well this is a photo-op, and it’s clear to me that she’s trying to turn this as a hedge in case everything backfires and we win. Imagine that. In case every plan the Democrats have backfires and we win, she needs a hedge.

By the way, a couple of scandal related stories. This is in USA Today. ?U.S. House Speaker Nancy Pelosi and two other prominent Democrats have failed to disclose they are officers of family charities, in violation of a law requiring members of Congress to report non-profit leadership roles. Rep. Rahm Emanuel of Illinois, the fourth-ranking House Democrat, and Sen. Evan Bayh of Indiana also did not report they serve as family foundation directors, according to financial-disclosure reports examined by USA Today. All three foundations are funded and controlled by the lawmakers and their spouses, and do not solicit donations from outside sources,? which means that, in addition to the good works of the foundation, it’s a tax move. A lot of wealthy people do this. They set up a foundation, the XYZ Foundation, fund it with a couple of million, you get to take $2 million off of your taxes the year you fund it, but you only have to give away 5% of it every year.
So rather than dole out charitable contributions and add ’em up over the course of a year, just set up a foundation and then dole it out as you wish. You can’t use it yourself unless you cheat, lie, steal, or try to. But legally you can’t, but you don’t get the full — whatever deduction, whatever amount you fund your foundation with is — and that’s why there are so many of them. And, of course, people do this, they want to make it look like they’re doing good works. It’s tax policy. And it’s legal. It’s not a tax dodge, anybody can start a foundation. If you want to start a foundation with $10,000, you can do it. You know, you can have the Bo Snerdley Foundation. Put the word “foundation” after your name, and, “Wow! What a great philanthropist you are, doing such great work for the poor, thirsty, downtrodden, hungry, and bored!”
Anyway, what’s the big deal about this? Filing a false report, and that’s what this is, when you don’t report that you head up the foundation as you’re supposed to report, filing a false report could be prosecuted as a felony, but these prosecutions are rare, of course. Last year then Senate majority leader Bill Frist failed to report his role in a family charity, updated his disclosure form. He was not punished. Let’s see. How long has it been here? It was an oversight that she had not listed her position dating back to 1992. Folks, it’s just a 14-year oversight. That’s all. Maybe 15-year oversight. That’s really nothing.
Then Dingy Harry, the Los Angeles Times again is aiming at Dingy Harry. ?It’s hard to buy undeveloped land in booming northern Arizona for $166 an acre. But Senate Majority Leader Harry Reid effectively did just that when a longtime friend decided to sell property owned by the employee pension fund that he controlled. In 2002, the Nevada Democrat paid $10,000 to a pension fund controlled by Clair Haycock, a Las Vegas lubricant dealer?? A Las Vegas lubricants distributor? Wow. Location, location, location. Does that conjure up some neat pictures. Dingy Harry doing business with Clair Haycock in the Las Vegas lubricants business, also been his friend for 50 years.
The payment, $10,000, gave Dingy Harry ?full control of a 160-acre parcel in Bullhead City that Reid and the pension fund had jointly owned. Reid’s price for the equivalent of 60 acres of undeveloped desert was less than one-tenth of the assessed value at the time. ? Six months after the deal closed, Reid introduced legislation to address the plight of lubricant dealers who had their supplies disrupted by the decisions of big oil companies.? (Laughing.) Let me read that again. ?Six months after the deal closed, Reid introduced legislation to address the plight of lubricant dealers who had their supplies disrupted by the decisions of big oil companies. It was an issue the Haycock family brought to Reid’s attention in 1994, according to a source familiar with the events.? Now, if Reid were to sell the property for any of the various estimates of value, his gain on his 10-thousand-dollar investment could range from 50,000 to $290,000. It’s a potential violation of congressional ethics for a member to accept anything of value, including a real estate discount from a person with interests before Congress. It’s a long story. The LA Times has done a lot of stories like this on the apparent questionable ethics of Dingy Harry and, of course, this will be ignored as well, other than what has appeared in the Los Angeles Times.