RUSH: Let’s go to the audiotape. Mrs. Clinton. This is last Saturday at Des Moines’ East High School. She said this about her position on the war in Iraq. 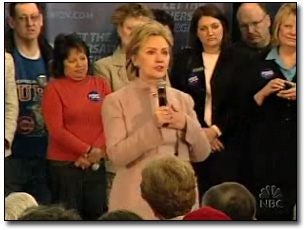 HILLARY: I said that we should not go to war unless we have allies. So he took the authority that I and others gave him and he misused it, and I regret that deeply. And if we had known then what we know now, there never would have been a vote and I never would have voted to give this president that authority.

RUSH: Yay! This is an outright lie. This is a total mischaracterization. We all know why. It is designed to get her over the hump, so to speak, of this problem that she has, that she voted for the war. So essentially, she was tricked. She never voted for going to war. She voted for the opportunity to go to war, but only if we had allies and only if we had exhausted negotiations, but she was not authorizing going to war. The next bite she says that Bush should finish Iraq before he leaves.

HILLARY: I think it’s the height of irresponsibility, and I really resent it. This was his decision to go to war. He went with an ill-conceived plan and an incompetently executed strategy, and we should expect him to extricate our country from this before he leaves office.

RUSH: All applause. You know what this is about. Bush has said that the war on terror will go on and on and on beyond his administration, and any expert in this realizes that that’s the case. Mrs. Clinton here is saying (summarized), ‘Oh, no, no, no! You get all this stuff off the table before I take office in 2009.’ That’s why she wants the troops out in 2009 because that’s what she’s going to be inaugurated, so she wants all of this off the table. She doesn’t want to inherit what she thinks is somebody else’s mess. Now isn’t that rich. From an administration that left the Bush administration with so many messes: the state of the military, the lack of any action on terrorism, on and on. The Clinton administration didn’t tackle anything big after they tried health care and it bombed out, because the preservation of that approval number at 65% was everything. But she didn’t want any tough challenges. It’s his responsibility, &ldquo;He started it. He should finish it before I take office. Just get out of there, Bush.&rdquo; Again, it’s about her. It’s not about the events in which the country is involved that define themselves and take their own course. It’s about clearing the decks for Mrs. Clinton so she can start fresh without having to get her feet wet or her hands dirty on any of this hard stuff.

RUSH: Now it’s time to contrast Mrs. Clinton. Again, two bites from Saturday, just play these back-to-back. This is Hillary totally distorting her Iraq war vote record.
HILLARY: I said that we should not go to war unless we have allies, so he took the authority that I and others gave him, and he misused it. And I regret that deeply. And if we had known then what we know now, there never would have been a vote, and I never would have voted to give this president that authority. ? There are no do-overs in life. I wish there were. You know, I acted on the best judgment that I had at the time, and at the time I said this was not a vote for preemptive war, and the president took my vote and other votes and basically misused the authority we gave him.
RUSH: Now, there’s no other way to say this. She’s lying. She’s lying through her teeth. If she had known then what she knows now, this was no different than what was being said in 1998 by her husband and every elected official that chose to support him when he was discussing Iraq, weapons of mass destruction, as well as Saddam Hussein. So let’s go back. We have audio here from March the 7th of 2003. This is before the Iraq war started. Senator Clinton had a meeting with Code Pink, and they recorded this on a cheap cell phone, that’s why the audio sounds the way it does, but we have a portion of her remarks here. Now, remember, this is March 7th, 2003. Contrast that with what you just heard. 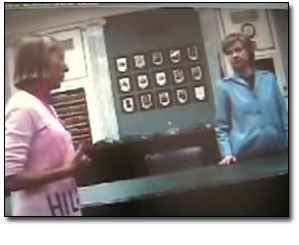 HILLARY 2003: There is a very easy way to prevent anyone from being put into harm’s way, that is for Saddam Hussein to disarm. And I have absolutely no belief that he will. I have to say that this is something I’ve followed for more than a decade. If he were serious about disarming, he would have been much more forthcoming. I ended up voting for the resolution after carefully reviewing the information, intelligence that I had available, talking with people whose opinions I trusted, tried to discount the political or other factors that I didn’t believe should be in any way a part of this decision. I would love to agree with you, but I can’t based on my own understanding and assessment of the situation.

RUSH: Wait a minute. I thought she said in Iowa over the weekend that Bush tricked her and misused her vote and misled her on all kinds of information? Here she says she did the research herself, that she had no belief that Saddam would disarm on his own. She says that this is something that she has followed for more than a decade. If he were serious about disarming, he would have been much more forthcoming. I ended up voting for the resolution after carefully reviewing the information, intelligence that I had available, talking with people whose opinion I trusted, and I tried to discount political or other factors. Now three and a half, almost four years later, she is lying through her teeth — there’s no other way to put this — lying through her teeth about what Bush did. Bush tricked her. She gave him an authority not for preemptive war, not to stop Saddam, and he misused the authority that her vote and the votes of others gave her. 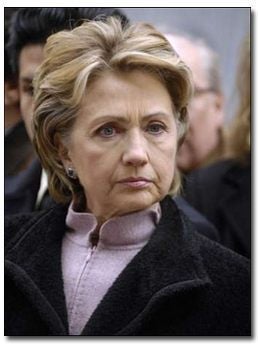 She’s talking here to Code Pink, an anti-war group, and she’s explaining to them why they’re wrong and why we have to go into Iraq and get Saddam. This is before the Iraq war started in March of 2003. In the next bite she specifically explains why the US would have to go alone if the UN wouldn’t cooperate. Now, this is a direct contradiction to the BS that she’s spewing now about Bush not exhausting diplomacy. This tape is on YouTube, and if we can find it, anybody can find it, and the Drive-Bys have no interest in this. They’re already treating her as though she is president. They’ll do anything, including the Sandy Burglar documents and whatever those things were all about, they’ll suppress anything that is bad news for Mrs. Clinton. But listen to this, talking to Code Pink, a Code Pink woman said, &ldquo;Hey, with all due respect, Mrs. Clinton, it’s not the United States, not up to this government to disarm Hussein. It’s up to the community of nations.&rdquo;

HILLARY: With respect to whose responsibility it is to disarm Saddam Hussein, I just do not believe that, given the attitudes of many people in the world community today, that there would be a willingness to take on very difficult problems, were it not for the United States leadership, and I’m talking specifically about what had to be done in Bosnia and Kosovo where my husband could not get a Security Council resolution to save the Kosovar Albanians from ethnic cleansing. And we did it alone as the United States, and we had to do it alone. And so I see it somewhat differently. So forgive me for my experience and perspective.

RUSH: She’s telling these Code Pink people (summarized), ‘Screw diplomacy! Screw the UN! Screw the world of nations! My husband couldn’t count on the world of nations to save Bosnia,’ which, by the way, still is a mess. But that’s another matter, another day. She’s telling these people we have to do it alone; we’re the only ones who can. Now, ladies and gentlemen, I think it’s profoundly serious, because what Mrs. Clinton did over the weekend in blaming Bush for tricking her, misusing the authority of her vote, that he was only to go exhaust all diplomacy first — which he did, by the way, for a year and a half.