The Smartest Woman in the World Was Tricked?

RUSH: Snerdley, did you tell me that a guy called for the Hillary Clinton then and now bites, and he’s at a college, and he’s got 30 people in his dorm waiting to hear this? Where is this, do you happen to recall? He doesn’t know where it is, but could be any institution of higher learning across the fruited plain.

If you missed this in our first hour, be advised that we’re going to continue to play these for you to the point that some of you may get tired of hearing it. But understand we are reaching a new tune-in factor each and every day. Every day we play these, every time we play them there are going to be people that have not heard them before. I’m not going to overdo it, but I just want to warn you, Mrs. Clinton now having gotten serious about her presidential candidacy was in Iowa over the weekend; we have four sound bites here. The first two are Mrs. Clinton explaining to Iowans how she got tricked into her vote for the Iraq war, how her vote was misused by the president, that if she knew today what she knew then, she wouldn’t in any way, shape, manner, or form have voted the way she did.
Then we have two bites from March of 2003 right before the war started, when she’s talking to people from Code Pink, the anti-war group, and you’ll hear such a contrast. You will be able to conclude only one thing that, Mrs. Clinton was lying through her teeth. I know that sounds harsh to say, folks, and you’re afraid it might drum up sympathy for her, but there’s no other way to characterize this as you will hear for yourself. Another thing you have to remember is that there’s reason that she thinks she can get away with it, and that is that her buddies in the Drive-By Media will not draw contrasts to what she’s saying now and what she said then. So we’re going to play these first two bites back-to-back, and then we’ll play the next two bites back-to-back. Up first, Mrs. Clinton in Des Moines this past weekend.
HILLARY: I said that we should not go to war unless we have allies. So, he took the authority that I and others gave him, and he misused it. And I regret that deeply. And if we had known then what we know now, there never would have been a vote, and I never would have voted to give this president that authority. ? There are no do-overs in life. I wish there were. I acted on the best judgment that I had at the time, and at the time I said, this was not a vote for preemptive war, and the president took my vote and other votes and basically misused the authority we gave him.
RUSH: All right, now, that’s explanatory, self-explanatory, doesn’t need any nitpicking, parsing, or analysis. Next two bites, March 7th, 2003, before the war, she is talking here — and this is cell phone audio. But she is talking here to Code Pink.

HILLARY: There is a very easy way to prevent anyone from being put into harm’s way and that is for Saddam Hussein to disarm. And I have absolutely no belief that he will. I have to say that this is something that I have followed for more than a decade. If he is serious about disarming, he would have been much more forthcoming. I ended up voting for the resolution after carefully reviewing the information and intelligence that I had available, talking to people whose opinions I trusted, trying to discount political or other factors that I didn’t believe should be in any way a part of this decision. I would love to agree with you, but I can’t based on my own understanding and assessment of the situation. With respect to whose responsibility it is to disarm Saddam Hussein, I just do not believe that, given the attitudes of many people in the world community today, that there would be a willingness to take on very difficult problems were it not the United States leadership, and I’m talking specifically about what had to be done in Bosnia and Kosovo, where my husband could not get a Security Council resolution to save the Kosovar Albanians from ethnic cleansing, and we did it alone as the United States, and we had to do it alone. And so I see it somewhat differently. So forgive me for my experience and perspective.

RUSH: Hey, you college students or anybody else, you want me to analyze these last two bites for you? I don’t think I have to. She basically says Saddam’s not going to disarm on his own, he would have been more forthcoming. She ended up voting for the resolution after carefully reviewing the information and intelligence that she had available, talking with people whose opinion she trusted. She tried to discount political or other factors that she didn’t believe should in any way be part of the decision. &ldquo;I’d love to agree with you Code Pink babes but I can’t based on my own understanding and estimate of the situation.&rdquo; My own understanding. She did not say President Bush is telling us, and the intelligence community. She said, &ldquo;My own assessment and my own understanding of the situation.&rdquo;

Contrast that with what she said in Iowa over the weekend where she pretty much said, &ldquo;I was lied to about all of this from Bush, and he misused my vote. I only gave him the vote after he exhausted diplomatic options.&rdquo; And, of course, then she went on to the next bite to say, &ldquo;Look it, I don’t think we can depend on the world to get rid of Saddam. My husband couldn’t depend on the world to save the Kosovar Albanians. We had to go it alone. We’re the only ones that could. He couldn’t get a UN resolution.&rdquo; Well, the UN had 14 anti-Saddam resolutions that they were ignoring. So this is who she is, and she’s getting away with this, other than here, on this program and elsewhere. 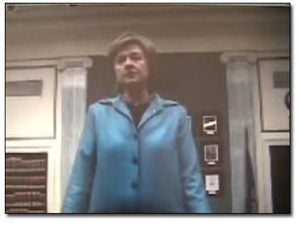 And, by the way, this audio that I played for you is at YouTube. It’s there. If we found it, anybody could. The Drive-Bys, ladies and gentlemen, of course, will totally ignore it. They ignore anything that might damage Mrs. Clinton’s chances here or at least illustrate her in a really bad light. I don’t know how you conclude anything other than the fact that she was lying through her teeth on Saturday. And we know why. She’s facing a really militant anti-war voting bloc in Iowa as she gears up for the Hawkeye cauci. Democrats there are very anti-war, and she’s got this albatross around her neck with having voted for it. So she seeks to lie and pretend that she — the smartest woman in the world, by the way — was deceived. She’s the smartest woman in the world, and she was tricked. That is not something that recommends her for dealing with really bad guys if she gets elected.

If Bush could trick her, I guess nobody else will lie to her. The terrorists will be honest with her and our enemies will tell her the truth, just can’t trust old Bush. It’s really something for you people on the Democrat side who do have a concern for ethics and honesty and so forth in the White House, and if you do have any national security concerns at all, you can’t just ignore this.