RUSH: From Foreign Policy magazine: ?Vietnam taught many Americans the wrong lesson: that determined guerrilla fighters are invincible. But history shows that insurgents rarely win, and Iraq should be no different. Now that it finally has a winning strategy, the Bush administration is in a race against time to beat the insurgency before the public?s patience finally wears out. That the insurgents can?t be beaten is a myth, because history shows otherwise. The cold, hard truth about the Bush administration?s strategy of ?surging? additional U.S. forces into Iraq is that it could work. Insurgencies are rarely as strong or successful as the public has come to believe. Iraq?s various insurgent groups have succeeded in creating a lot of chaos. But they?re likely not strong enough to succeed in the long term. Sending more American troops into Iraq with the aim of pacifying Baghdad could provide a foundation for their ultimate defeat, but only if the United States does not repeat its previous mistakes.

?Myths about invincible guerrillas and insurgents are a direct result of America?s collective misunderstanding of its defeat in South Vietnam. This loss is generally credited to the brilliance and military virtues of the pajama-clad Vietcong. The Vietnamese may have been tough and persistent, but they were not brilliant. Rather, they were lucky?they faced an opponent with leaders unwilling to learn from their failures: the United States. When the Vietcong went toe-to-toe with U.S. forces in the 1968 Tet Offensive, they were decimated. When South Vietnam finally fell in 1975, it did so not to the Vietcong, but to regular units of the invading North Vietnamese Army. The Vietcong insurgency contributed greatly to the erosion of the American public?s will to fight, but so did the way that President Lyndon Johnson and the American military waged the war.
?It was North Vietnam?s will and American failure, not skillful use of an insurgency, that were the keys to Hanoi?s victory. ? Insurgencies generally fail if all they are able to do is fight an irregular war. Successful practitioners of the guerrilla art from Nathanael Greene in the American Revolution to Mao Zedong in the Chinese Civil War have insisted upon having a regular army for which their guerrilla forces served mainly as an adjunct. ? Combating an insurgency typically requires 8 to 11 years. But the administration has done such a poor job of managing U.S. public opinion, to say nothing of the war itself, that it has exhausted many of its reservoirs of support. One tragedy of the Iraq war may be that the administration?s new strategy came too late to avert a rare, decisive insurgent victory.?

Now, Donald Stoker is the author of this piece. “he is a professor of strategy and policy for the U.S. Naval War College?s Monterey Program. His opinions are his own.” That?s what it says here. He is the author or editor of a number of works. Again, this is ForeignPolicy.com. That may be what the caller was referring to, could quite possibly be the case. Along the same lines, it’s strange to read a piece like this, is it not? As I read it, is it not strange for you to hear it, that we’re doing well and we could win and we could do even better? Here’s another piece like that that runs in a Canadian newspaper, and it’s sort of sad and odd that you have to read this point of view in a Canadian newspaper. 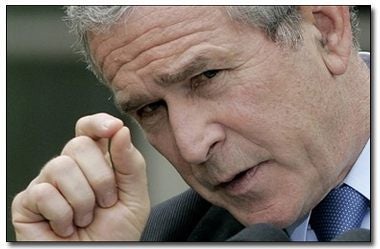 It’s by Paul Jackson. He says, ?President George W. Bush is going to persevere and prevail in beating world terrorism and bringing stable democracies to both Afghanistan and Iraq. There will be no wavering and no withdrawal.
These were the heartening words given me by U.S. Ambassador to Canada, David H. Wilkins. So the mischief-makers, the defeatists, the fellow travelers and the Liberal-Left cabal better get out their handkerchiefs and start sobbing. Their ignoble cause will fail. The course of decency and democracy will win. Now Wilkins, who visited the Sun for an editorial board meeting this past week, is a very astute and articulate fellow. He spent 25 years in the South Carolina House of Representatives, 11 of them as Speaker of the House. During those 25 years he was on the cutting edge of most major reform initiatives from welfare reform to property tax relief, and from educational accountability to truth-in-sentencing laws. Wilkins is an affable, engaging man, but also one with a steel-trap mind. In that, he’s very much like his boss back in the White House.
?As noted by Sun columnist Salim Mansur — the best commentator by far in Canada on the Middle East and Islamic terrorism — Michael Novak, the noted Roman Catholic theologian and philosopher, recently described Bush as ?the bravest president? for staying firm in confronting the contemporary barbarians despite the venom of his peers. The U.S ambassador echoed those sentiments, pointing out Bush will determinedly do what is right rather that what the polls may say is unpopular. America’s salvation matters more than what the temporarily up-and-down swings in the polls say. The 9/11 attacks on the World Trade Center towers and the Pentagon when Bush had been in the White House little more than one year changed the entire direction of the presidency.?
The piece goes on and on and on praising Bush. Now, admittedly the source for this is our ambassador to Canada, David Wilkins, but the columnist readily agrees with him and supports it. You just don’t see this kind of stuff in the media. You don’t see praise of Bush to the point now where in Republican circles, conservative publishing circles and this sort of thing, you’re starting to see, ?This guy is out of his mind, he’s not listening to anybody. Is he tone deaf?? They’re asking all these questions about him because the inertia for failure and defeat have been increasing, and it’s been consistently going on for a long, long, long time, and both of these two stories from ForeignPolicy.com and this Canadian newspaper are so rare that they stood out.