“It was a cold January evening, and a security patrol responded to the latest shooting in a neighborhood that is deadly even by the standards we hear about in the media today. The man in his early twenties was talking on a cell phone about somebody who had just shot him. Several security officers surrounded him trying to get a description of the assailant who had fled the scene about five minutes earlier. At the scene of the shooting a couple of hundred yards away, police found bullet holes all over a wall. A woman emerged from a nearby little house, says she heard three shots. She shakes her head in shock at the latest violence that’s going on. Thirty-nine people were killed there last year. Violent crime just seems to be on the rise again.? No matter what we do, no matter how we choose to fight it, we just don’t seem to be able to stop it. These deaths rose 7% up to 406 last year alone. 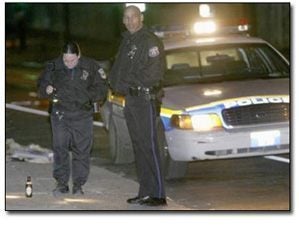 So, I suppose we should ask this question. If the Democrat Party — which runs that city and runs that state — if the Democrat Party can’t keep relative peace in one of the nation’s largest cities, how in the name of Sam Hill are they going to be able to keep peace in the rest of the world? Will Nancy Pelosi hold hearings into the murder of US citizens in Philadelphia? What about Arlen Specter who represents Philadelphia in the Senate? How much time has Senator Specter spent on hearings dealing with the rise of violence in Philadelphia? Don’t tell me it’s a local matter. Don’t tell me it’s a state matter. We’re concerned with death here. We’re concerned with body counts. We’re concerned with the breakdown of law and order. Insurgencies, gangs, whatever you want to call ’em. They’re out of control in major American cities, and Philadelphia is just one example, and where are the hearings on this? Oh, I know. Senator Biden and Speaker Pelosi are too busy trying to weaken the commander-in-chief so we can’t win the war in Iraq. They are not only invested in defeat, they can’t allow victory. Politically, they cannot allow it. 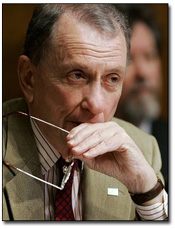 Four-hundred-and-six Philadelphians murdered last year, unbelievable. We’ve lost just over 3,000 soldiers in Iraq in nearly four years, about 600 of those were due to non-combat accidents. There were 821 deaths in Iraq, troop related deaths last year; 406 in one American city! Consider the media attention. We hear about how out of control Baghdad is. We hear about how nobody can control it, and Bush can’t control it and the US military can’t control it. Let’s get a little proportion and let’s talk about the fact that it is not safe to walk in parts of our own American cities, Democrat-run cities, liberal politicians. The contrast in Big Media coverage, especially the TV networks, is sickening. If we were to follow the way Democrats want to deal with Iraq and apply it to how we should deal with Philadelphia and other crime ridden big cities, we should do the following: Cut off all federal funding for Philadelphia, withdraw all federal agencies and FBI offices, any federal law enforcement, get them the hell out of there by 2008 so Hillary Clinton doesn’t have to deal with it when she’s inaugurated in January of 2009.
It sounds to me like there’s a civil war going on in Philadelphia and in other major American cities, and we ought not be in the middle of it. We need, well, diplomacy. Okay, try diplomacy. Send some diplomats in there. Negotiate peace between the gangs and the citizens who are at war with them. But before anything is done, a resolution. We need a resolution from the United States Senate which forces President Bush to remove all federal presence from Philadelphia and now. He is not the decider. Senator Specter said it yesterday, he’s not the sole decider. They have codeciders in the United States Senate. Senator Specter, maybe you should take your eyes off of Iraq and Baghdad and focus on your hometown.

BREAK TRANSCRIPT
Senator Specter is worried about what’s going on in Baghdad, meanwhile, we had 821 troop deaths, not all in combat, last year in Iraq, the whole country, and 406 in Philadelphia. You want to add up how many we had in other major cities like Miami, Detroit, New York, Chicago? My point with this is the Democrats and these cowardly Republicans who are joining sides with them here on this resolution business — and, by the way, Specter is getting frustrated at all the resolutions. He said resolutions are falling like snowflakes. This may be a plan, you know, just paper the House and the Senate with resolution after resolution after resolution so that not one of them gets a majority vote, and make it look like a circus, which it is. But they’re all basing this need to redeploy and get the troops out of there on the fact that they’re dying. They’re dying, ladies and gentlemen, troops, the troops in a war — (panting) — are dying. Which at 3,000 whatever it is, 3,030 of them in four years, less than a thousand a year. This is pretty — pretty — I mean battlefield fatalities are at an all-time low, particularly in this war.

So they’re not concerned about anything other than, they’re dying, the troops are dying, we’ve gotta get the troops out, the troops have to come home. They all hate Bush, it’s all about hatred for Bush, Republican side, too. A bunch of wimps that think they’re going to go down the tubes if they don’t distance themselves from Bush. Typical, gutless, linguini-spined politicians, don’t care what party, typical behavior. ?It’s all about death, Mr. Limbaugh, they’re dying.? Well, soldiers dying in a war zone is one thing, but citizens in a civilized American city being murdered at the rate of 406 a year, speaking of Philadelphia. ?Philadelphians are dying, Senator Specter.? In one city we lose half as many American citizens, innocent lives, as troops dead, not all on the battlefield, either, in Iraq.
Where is the concern for the dying in Philadelphia? Where is the concern for the dying in Detroit, Chicago, Miami, Houston, Dallas, New York, Boston, take your pick? Where is the concern for the death and the dying? Where are the resolutions? Where are the demands that we train local security forces to deal with this? Where are the threats from our great fearless leaders in Washington to get out? I’m sure we got military installations in all of these cities. Our troops are at risk in our major cities. We have National Guard members, we have Reservists in all these cities. They are at risk, Senator Specter, in your hometown. Have you no concern for the possibility they might die on the streets of Philadelphia? You see how bogus this whole argument is on get the troops out now because they’re dying for nothing? What an insult to them. Just frosts me, folks. I’m fuming here, boiling over.