The Libby trial. Ladies and gentlemen, the Drive-By Media covering the Libby trial leave at noon to go appear on television and to make their deadlines. They are misreporting totally what is happening in that courtroom. They are making it look like Libby is being slammed and creamed each and every day, and it’s just the opposite.
Every one of Patrick Fitzgerald’s witnesses is being successfully challenged on the same basis Libby has been charged — faulty memory. Libby’s whole defense is, ?With so much going on with national security, I don’t remember who I told what when. I wasn’t lying to you, Mr. Fitzgerald, in the grand jury, I just don’t remember.? Every one of his witnesses, Fitzgerald’s, has been shown to have a spotty memory on all of this. The latest is this. ?Former New York Times reporter Judith Miller acknowledged Wednesday that she had conversations with other government officials and could not be ?absolutely, absolutely certain? that she first heard about an outed CIA official from I. Lewis ?Scooter? Libby.?
This is a bombshell because yesterday in this trial Judith Miller claimed that her memory was button tight. It was buttoned down, it was unassailable, yet her memory when she testified before the grand jury was spotty and sketchy and if you’ll recall she refused to answer some questions and went to jail for it and spent 48 days in jail or however long. She says she slept on the floor, not even the cot. Don’t ask me why. The story doesn’t say. Yesterday she was dead certain, and then the defense team went at her and started making some progress. And then, the defense team said to the judge, ?Look, judge, we want to ask her about any other sources.? Because she was making the point that Libby was the only person she talked to about this, and she wasn’t even writing a story about Plame or Joe Wilson. Yet she went to jail for not ratting out sources or what have you. The defense said, ?Judge, we need to be able to ask her about everybody she talked to.? Of course, Fitzgerald said, ?Oh, no, no, no, no, can’t do that. What do the other sources have to do with Libby?? The judge yesterday seemed inclined, according to reporters, to limit the scope of the cross-examination of these media members.

But I’m going to tell you something. This is a United States citizen who is on trial and could theoretically, if found guilty, could go to jail, go to prison for years, and if the judge actually says no, you cannot ask certain witnesses who are accusing you, in order to challenge their credibility, which is the whole point — I mean, Fitzgerald is trying to say Libby was lying when he said he had a bad memory. Every one of Fitzgerald’s witnesses that’s come forward has been shown to have a spotty, sketchy memory that cannot be counted on, and Judith Miller is the latest one today. 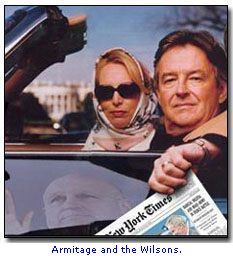 A few other notes I made about this that we’ll discuss as the program unfolds today, but I just want to tell you again that what you’re reading in the Drive-By Media about this trial it’s nowhere near accurate. If you’re watching Chris Matthews or CNN, you’re not getting anything. Matthews was actually drooling on television the other night about this. He actually had spittle coming down on the chin, so excited, on such rapid fire speech. These guys are orgasmic over this because they think that Libby is going to take the fall and they’re going to get Cheney once he’s called to testify and so forth. But the defense here is doing a good job.
I don’t know yet if the judge has ruled on just how far the defense can go in questioning the media members that are brought up here to testify for the prosecution. I’ll just tell you what I think is going on with this, ladies and gentlemen, is the prosecution, Patrick Fitzfong, has prepped his witnesses with testimony that fits nicely together trying to tell a story of Scooter Libby as a liar. But when pressed to actually explain what they remember, the witnesses can’t. Can you imagine today, under oath, finally, Judith Miller acknowledged that she had conversations with other government officials and could not be absolutely, absolutely certain that she first heard about an outed CIA official from Scooter Libby? The sound you heard in the courtroom was a giant thud of defense feet hitting the floor. I would have loved to have been in the courtroom when this was said by Judith Miller. They put this reporter on the stand, and they’re going to put others on the stand. Their credibility is being measured against Scooter Libby’s. Of course, their conduct respecting the Plame matter should be fully examined by the defense.
The government should have considered the ramifications of all this when they called these media people to testify against a US citizen. The defense has a job to do, and that’s to grill Judith Miller and every other witness that comes up. This is a US citizen on trial for something that’s a process crime, has nothing to do with the original charge that the special prosecutor had in this case anyway. How can a citizen defend himself if he can’t fully expose a witness to the jury? If a witness can’t be fully exposed as less than honest or what have you, then how does a fair trial result? Now, somebody might ask, ?Well, what does Judith Miller’s discussion with other sources have to do with Scooter Libby?? The judge even wondered that aloud yesterday. But is this not a trial about memory and recollections? Is she not on the stand to raise doubts about Libby’s credibility? That’s why she’s there. That’s why Fitzfong has put her up there and every other witness he’s called is to shed doubt on Libby’s credibility.
The whole trial is about who you believe. It’s not about some grand criminal activity. It really isn’t. There’s no grand criminal activity that took place here. The government set this trial in motion ? actually, you know what set this trial in motion is the Drive-By Media. They’re the ones that demanded all this. This was the one leak they had to get to the bottom of it. The other leak they couldn’t care less. And all the while it was Richard Armitage and many of them knew it. So they wanted this trial as a means of getting at the Bush White House. Now, if Judith Miller had only spoken to Libby, that’s fine, but this issue is going to arise with all the other media witnesses that Fitzfong plans to call. What they want to do — prosecution is a prosecution. They want to fix the case by limiting what the jury can know. But of course now we know that Judith Miller has acknowledged today that she had conversations with other government officials and could not be absolutely, absolutely certain that she first heard about an outed CIA official from Scooter Libby. That’s dramatic. By the way, Scooter Libby is clean. Scooter Libby looks clean to me. Ted Kennedy looks thirsty to me, increasingly so.