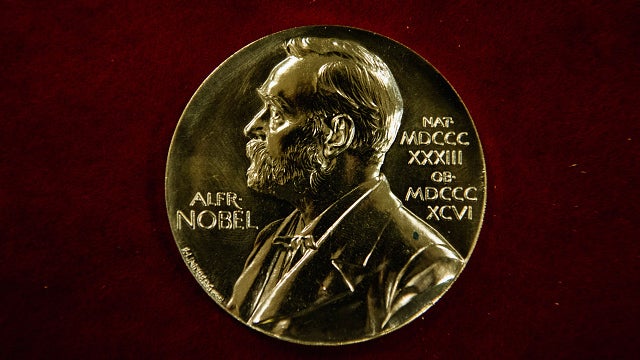 RUSH: Can somebody tell me what in the world raising awareness to a false, phony premise like global warming has to do the with peace? What in the world does it have to do with peace? Absolutely nothing. By the way, I am under no illusions I’m going to win this, ladies and gentlemen. Oh, and I should tell you, I?m getting all kinds of angry e-mail from liberals on this, frothing in their e-mails, simply unbelievable to them that I would be nominated for one of their own such prestigious awards. They feel powerless to do anything about it. I want to say to all of you libs who are just nonplussed by this, it’s a free world. Call ’em up over there at the Nobel committee in Oslo. You can find the number, they’ve got a website. Call ’em up if you object to this, call ’em up and tell ’em so, tell ’em how outraged you are. You don’t have to sit there and take this in silence or at least frothing amongst yourselves on your websites or whatever. Take matters in your own hands. Instead of complaining and whining about things like you always do, take some action. Here’s Fox’s KTTV Los Angeles, cohost Steve Edwards and Lisa Breckenridge.

EDWARDS: Gore’s name was entered by members of the Norwegian parliament. On the other hand, Rush Limbaugh was entered as well. He was nominated by the Landmark Legal Foundation, which calls Limbaugh the foremost advocate for freedom and democracy in the world today.

RUSH: And we’ll be back after this, ladies and gentlemen.

RUSH: Here’s the audio of the Fox News Channel report about 15 minutes ago, a little over 15 minutes ago of my nomination for the Nobel Peace Prize.

GREG JARRETT: He’s been called many things in his long and controversial broadcasting career, but never a Nobel Peace Prize winner. He hasn’t won it yet. Radio talk show host Rush Limbaugh nominated today for the 2007 Nobel Peace Prize. The Landmark Legal Foundation tapped the talker, calling him the foremost advocate for freedom and democracy in the world. Landmark, by the way, is the leading conservative public interest law firm in the US, and Limbaugh serves on it?s board of advisors. The Nobel Peace Prize will be awarded December 10th in Oslo, Norway.

RUSH: Hey, hey, hey, it’s an unpaid position. I’m an unpaid member of the board, which means I may as well not be a member of the board. Don’t do that. Now they’re trying to say that there’s some chicanery involved here. I’m an unpaid member of the Landmark board. Well, anyway, there you have it. So it continues to sweep the nation. It’s in many of the trade publications of the radio and broadcast business. By the way, folks, speaking of all this, I still don’t understand what raising awareness to anything involving global warming has to with world peace, I really don’t, and that’s Algore’s reason for being nominated.

RUSH: By the way, I didn’t see this earlier, just caught my attention here. The New York Times has a blog, and the blog is called The Lede. It’s in their news section, their website. It’s not published in the paper, I don’t think. There is a lengthy entry with side by side photos, Algore’s nomination for the Nobel Peace Prize and mine, with quotes from the Algore nomination letter juxtaposed against quotes from my nomination letter written by the Landmark Legal Foundation. (Laughing.) You know what’s happening now? I’m told Eric at the Landmark Legal Foundation says they’re being phone spammed. All these little Democrats are calling and shouting insults at them and then hanging up. (Laughing.)