Rush Babe on Board

RUSH: Tracy in Chicago, Illinois, welcome to the EIB Network.
CALLER: Dittos, Rush, from Chicago and ?Go Bears!?
RUSH: Thank you.
CALLER: Rush, in the EIB Store, you sell these signs for cars that say Rush Baby on Board.
RUSH: Yes.
CALLER: Okay, well, how about making one that says Rush Babe on Board? Because I’m a conservative, and I’m proud of it, and I’m a hottie, and I’m proud of it.
RUSH: Oh, wow. You’re a hottie, huh? 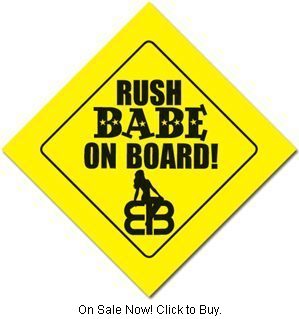 CALLER: Yes, I am, and a lot of your audience is women, and, Rush, you’ll sell tons of them because, I’ll tell you what, not all beautiful people are Hollywood liberals.
RUSH: Amen. Thank God.
CALLER: Yes. What do you think? Rush Babe on Board?
RUSH: We’ll do it!
CALLER: Oh, great!
RUSH: We’ll do it. In fact, we’re going to have to rev up the entire merchandise line. Now that I’m a Nobel Peace Prize nominee, we’re going to have to have a whole Rush for Peace merchandise line with t-shirts and caps and so forth. We’re going to put logos of me on the Nobel Peace Prize coin, on the t-shirt. We’re going to put my picture underneath the phrase “give peace a chance.”