You Can’t Take Care of Yourself

RUSH: Disaster overnight in central Florida. (story) At least 14 people killed because of a swath of tornadoes that went through there. By the way, I need to point out to you that Florida, and the governor here, Charlie Crist, have not waited for FEMA. They’re not on television today saying, ?Where’s FEMA? Where’s Mike Brown? Where’s Bush?? Nobody cares. They’re not shouting; they’re not complaining; they’re already getting their emergency response in gear, handling it themselves here in the state of Florida. No complaints, no demands that the feds get in there and do anything. Well, the thing about this that is curious to me, why couldn’t they have predicted this? This is the day that the Union of Concerned Scientists puts out a summary of a report that’s not due in full until May, I think is the date. The summary can’t possibly by definition contain all the data in the full report, and the purpose of putting the summary out three or four months early is so when the full report comes out with a bunch of contradictory things in it, nobody will pay any attention to it. 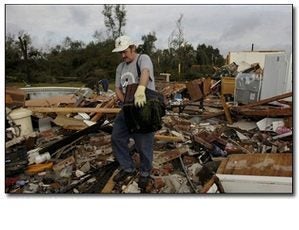 The Drive-By Media is all over this now, ?We’re doomed! We’re cooked! It’s over with, fini, kaput!? Don’t even buy 30-year treasury bills, folks, because we’re not going to be around that long. Don’t buy long-term bonds and put ’em in your IRA, because there is no long term. I read it in this report. If we’re lucky, the planet will be around long enough for ten-year treasury notes to mature just before you die. I wouldn’t even mess around with the ten-year treasuries. If I were you, stick with the three-month T-bills because you never know. What I want to know is how they can predict. We’re going to have, by the way, a lot more on this global warming business today in a whole bunch of areas. It’s time to expand on this. I got a great question yesterday, ?Why do you keep harping on this?? I got it in an e-mail. (interruption) What? I don’t have Fox on. I’m watching the NFL commissioner doing his press conference. See, I’m here, I’m in the middle of a great riff, and these guys are so excited to see me on TV, which to me is no big deal, happens every day, so Snerdley starts shouting in the IFB, “Fox! Fox!” looking around, where is the Fox? We have two of them here on the island, maybe four. We do. We have them here to get rid of the vermin. I don’t have Fox on right now, I’ve got the NFL Network on, watching Goodell. So they did a report on my Nobel Peace Prize? As I said, sweeping the nation. It is. We’ll get some audio sound bites on it.
I just want to say I got this great question about, ?Why you keep harping on it?? Folks, there is so much about this I want to expand on today, not to overdo it, in addition to the discussion yesterday about how global warming contains every element of liberalism versus conservatism. It’s also a religion to these people. Michael Crichton has written great speeches about this. These are people who do not believe in the God of creation, and we human beings are hard wired for religious beliefs, even atheism and agnosticism are religious beliefs. We’re hard wired for it. Nobody knows why, but it’s there. These wackos that are involved in the global warming — and look at the similarities. One theme that constantly runs through every religion, I don’t care what it is, is the end times, the apocalypse, another theme that runs through every religion is sin. Well, in the environmental wacko universe, sin is not recycling, sin is destroying the planet, sin is all the pollution, and accompanying all of this is what? Something else that you find in many religions, guilt. So theirs is a religion and the similarities are uncanny. We’ve talked about this before with the Michael Crichton speech. Other people are starting to talk about it. So we’re going to get into all of that as the program unfolds today.