Do Hillary and Obama Have a Deal? 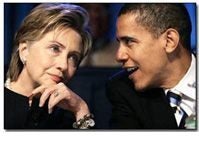 CALLER: Hey, I want to pass on to you… I think that for the people who orchestrate and control elections, they’ve got us in a gigantic shell game. I think Barack Obama always has been and always will be the VP on a Democratic ticket, and the shell game aspect of this is — in all this drama that’s going on in this hard fought campaign that they’re going to tell us about down the road — all this money that’s diverting to Obama’s campaign is going to end up in the same coffers because they’re going to be on the same ticket.
RUSH: As Hillary? You’re obviously talking about Hillary.
CALLER: Absolutely.
RUSH: Well, we’ve got an Obama stack coming up, and it’s interesting what’s happening in the black community with certain black leaders and black columnists regarding Obama. They are frustrated and want him to get out of the race. It’s fascinating stuff. A lot of people have the theory that you have, that this is all just a giant game; that the media is playing along with the Clintons in building Obama up so he’ll be chosen as #2, combine campaign funds and resources, and get the first woman really elected president and first black elected vice president and so forth. You could be right. I find it interesting how many people do still consider the Democratic Party to be one of intricate, secret conspiracies and that they all play along so as to cover it up and keep it unnoticeable to most members of the public.
I still don’t think, folks, that they are that organized or that smart, and I don’t think they are that unified. It could be that Hillary struck a deal with Obama. Always that is possible, but the Democratic Party when it comes to vying for party in elections, they’re not a monolith. They do hang together better than Republicans do, but they’re not a monolith and this giant, indestructible force that people think of them as being. Otherwise they’d be winning a lot more elections than they have been lately.