RUSH: So many of you were interested in Obama, let’s start. I’ve got one, two, three, four, five, six, seven, eight, nine, ten. I was given 11 Obama bites today. Eleven Obama bites, so let’s get rolling. Let’s start with Saturday in Chicago, a portion of Senator Barack Obama announcing his candidacy for president. 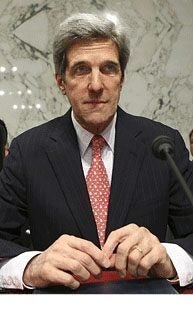 OBAMA: It should have never been waged and to which we now have spent $400 billion and have seen over 3,000 lives of the bravest young Americans wasted.
RUSH: Now, Barack is out saying you know, he didn’t really mean that because there’s such thing as wasted lives and so forth — and he’s typical. I don’t know if this was invented on Oprah or whatever, “Well, that’s not really who I am! That’s not what I really think.” Well, you said it, and you probably meant it. The gaffes probably represent truth and you gotta go out and massage the truth. “Well…(Muttering.)” He’s on 60 Minutes Sunday night. Steve Kroft said, “Your mother was white; your father was African. You were raised in a white household. Yet at some point you decided you were black.”
OBAMA: I’m not sure I decided it. Uh, I think, uh, you know, if you — if you look African-American in this society, you’re treated as an African-American, uh, and, uh, when you’re a child in particular, uh, that is how you begin to identify yourself.
RUSH: So are we to conclude here that he didn’t define himself as black, that the way he looks does? (Sigh.) Okay. We’ve got Obama’s wife in here. We’ve got John Howard from Australia coming up, but, “I’m not sure I decided it”? Well, if you didn’t decide it, then how did it happen?

Well, renounce it, then! If it’s not something you want to be, if you didn’t decide it, renounce it, become white!
BREAK TRANSCRIPT

RUSH: Okay, back to our Barack Obama Audio Sound Bite Marathon. What are we up to now? Let’s see. Oh, yeah. Obama just said he wasn’t sure that he decided he was black, that if you look African-American in this society, you’re treated as an African-American, and when you’re a child in particular that’s how you begin to identify yourself. If you don’t like it, you can switch. Well, that’s the way I see it. He’s got 50-50 in there. Say, “No, I’m white.” Obama’s wife got in on the act on 60 Minutes. What’s her name? Michelle. And Kroft says here, “Michelle, this is a tough question to ask but a number of years ago Colin Powell was thinking running for president, and his wife Alma really didn’t want him to run. She was worried about some crazy person with a gun. Is that something that you think about?”
MRS. OBAMA: I don’t lose sleep over it because the realities are, you know, as a black man, Barack can get shot going to the gas station, you know, so you (Laughing.) You know, you can’t — you know, you — you can’t make decisions based on fear and the possibility of what might happen. We — we just weren’t raised that way.
RUSH: That was Sunday night. This is Ames, Iowa, in his speech before thousands at Iowa State. I think he gets heckled here.
OBAMA: Energy. We know —
PROTESTORS: (Chanting.)
OBAMA: All right, guys. All right, guys. Come on, now. You know, you made — you made your point. We’re all going in the same place. We, uh — all I’m asking is just the courtesy to let me finish until we start addressing your point. That’s all I’m asking for.
RUSH: What were they shouting? Could you tell what they were shouting? It’s a bunch of angry protesters there. “Out of Iraq now,” rhymes with… Yeah, anti-war guys. Well, Barack will address their concerns after he makes his point. We’re not going to hang around long enough to hear that. John Howard, the prime minister of Australia, on Saturday said this about Democrat presidential candidate Barack Obama.
HOWARD: He’s a long way from being president of the United States. I think he’s wrong. I think that would just encourage those who want to completely destabilize and destroy Iraq and create chaos and a victory for the terrorists to hang on for an Obama victory. If I were running Al-Qaeda in Iraq, I would put a circle around March 2008 and pray as many times as possible for a victory not only for Obama but also for the Democrats.
RUSH: Well, this didn’t sit well with Barack. It didn’t sit well with Obama. Yesterday in Chicago, at a press conference, he was asked about what John Howard said, and this is what Obama said in response.

OBAMA: I think it’s flattering that, uh, you know, one of George Bush’s allies on, uh, on the other side of the world started attacking me a — a day after I announced. I take that as a ? a compliment. So if he’s ginned up to uh, uh, um — to — to — to fight the good fight in Iraq, I would suggest that he, uh, calls up another 20,000 Australians, uh, and sends them to Iraq.
RUSH: Wait a second. Now, I know that sounds like a pretty good put-down to some people, but it doesn’t jibe because Obama wants to pull out of there forthwith. Unilateral withdrawal now! He’s probably a little shocked by this comment from John Howard. Now we’ve got two more of these. This is not going to matter to anybody, but we’re just going to get it out there on the record in case you haven’t heard it. This is Obama on Meet the Press, January 22nd, 2006.
OBAMA: I will serve out my full six-year term.
RUSSERT: So you will not run for president or vice president in 2008?
OBAMA: I will not.
RUSH: I’m telling you, folks, there is more of this couple and candidacy that reminds me of the Clintons than I can begin to tell you — and here’s Obama two years ago. This is at a press conference saying that he didn’t have the experience to run for president.
OBAMA: I am a — a believer in knowing what you’re doing when you apply for a job, and I think that if I were to seriously consider running on a national ticket, I would essentially have to start now, before having served a day in the Senate. Now, there’s some people who are — might be comfortable doing that, but I’m not one of those people.
RUSH: Eh, that’s November 8th, 2004. He said he wasn’t running, didn’t have experience, but of course none of that matters now — and this is not going to matter to anybody, because that was then and this is now. But I’m telling you, the similarities here between the Obamas and the Clintons is stunning in more ways than one. Obama also said on February 11th in Iowa Falls, Iowa — this is really mystifying to me. Barack Obama said Sunday, “‘name recognition’ would be his toughest challenge in the 2008 presidential campaign.” Really? Name recognition? Who in the world is not going to remember Barack Obama, Barack Obama?
Well, Ted Kennedy, yeah, but the idea there’s going to be a name recognition problem here is absurd. The poor guy has hurdles, but this isn’t one of them. Let’s see. What did he say? The first term senator said, “Well, they have an infrastructure…” He’s talking about Hillary and John Edwards. “They have an infrastructure and name recognition higher than mine so there will probably be a higher burden of proof for me.” Yeah, but look, O’ Clean One. The Drive-Bys don’t love them as much as they love you, and so you will not have to go as far and work as hard to establish your name recognition, which is such a nonsensical comment in the first place. Anyway, that’s the Obama stack; those are the Obama sound bites, and those were my witty comments concerning them.