A Dark Day in the History of the U.S. House of Representatives

RUSH: One of the darkest days in the history of the House of Representatives is slated for tomorrow. This is where they’re going to vote on this nonbinding resolution, and the ‘slow bleed’ process to take the president out of Iraq. Actually, the process here is to isolate him politically and to limit his ability to maneuver, similar to what happened with the Democrats in the Congress during the Vietnam War with Nixon. They actually never did cut off funding for Nixon, but they did tell him where he couldn’t send troops. It eventually led to a debacle, and the same thing is being planned here by people, and they’re calling themselves ‘courageous;’ people who are telling themselves and their audiences that they are acting in the best interests of the country. 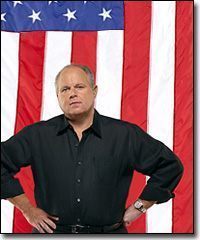 But I’ll tell you, there is no sound bite; there is no torturously crafted statement; there is no skillful twist of logic; no lawyerly proclamation; no media spin, whatsoever, that will turn the House vote tomorrow — this nonbinding resolution — into anything but a disgrace of historic proportion. The only positive here in these debates, is that the House is showing they have the courage to show they have none. They are demonstrating, for each and every one of us, that they have all the courage in the world to show that they have no courage whatsoever. Do you know what courage would be here? Courage would be going the polls and supporting the mission. Courage would be going the polls and cutting off funds. Neither of these options are on the table for these people, because they don’t have the courage to do either of those things. All they have is the courage to say, ‘We support the troops, Mr. Limbaugh! We support the troops,’ and that, my friends, is not support. It is the guidance of political consultants who tell ’em what to say. But what message are they sending to our troops? What message are they sending to the enemy, and what message are they sending to Pelosi’s children and grandchildren?

Speaker Pelosi, Congressmen Hoyer and Murtha, you might be conning the moderates out there. No doubt you are. But, you’re not fooling the left — your ragtag mob out there who want immediate withdrawal — and you’re not fooling the right who want victory. This historic BS, this historic Barbra Streisand will have little effect now, but it will put you in the record books for arranging one of the darkest days in the history of the House of Representatives.

RUSH: There’s something else here, folks, that’s also troubling about this. This is the New York Times, so we have to question it, but it’s probably true: ‘A dozen Republicans arrived in the House chamber on Wednesday to set aside their party allegiances and lend their names to a resolution intended to rebuke President Bush for his Iraq policy. Representative Howard Coble of North Carolina said that Iraqis had their chance at freedom, but chose civil war. Representative Steven C. LaTourette of Ohio argued that troop buildup was a tactic that had already failed. And Representative John J. Duncan Jr. of Tennessee suggested that military contractors had profited mightily at the expense of the American treasury.’ These are Republicans joining Democrats in the resolution tomorrow, a total of 12 of them breaking ranks here. It’s unbelievable. There’s so many answers to the question that Tazz asked me: ‘Why is this happening?’ One of the greatest… Well, in fact, I can help answer this by using this call here as a springboard or transition.

This is Rip in St. Petersburg, Florida. Rip, I’m glad you called, sir. Welcome to the EIB Network.

CALLER: Hi, Rush, good to talk to you.

CALLER: Yeah, I think the problem we’re having is even when we get — even if there is any good news out of Iraq, and I’ve always been against the Iraq war. I should put that up front. I’m a Libertarian. But even if there is any good news, I think when it comes from higher ups in Washington now we have a real credibility issue, just like when Clinton lied about how ‘I did not have sexual relations with that woman,’ you know, we can’t believe a word he said after that, and I think, you know, they drummed up this war, and now we’re seeing the facts were manipulated to — to —

CALLER: — give us a reason to go over to Iraq, that — that — that we really didn’t have good proof.

RUSH: Let’s stick with your theme of the fact that Bush has no credibility. One little aside on Clinton. Even after he lied, the liberals and the media continued to believe him. They didn’t hold that against him. Even though —

RUSH: Bush doesn’t lie and that’s all his reputation is. Bush may be a number of things. He may not be the best-spoken president. He may not appear to be the brightest, but he doesn’t lie, and yet everybody thinks he does. Now, this is key. You talk about credibility. Why does Bush have no credibility? It goes beyond Bush having no credibility. The great danger here is that the military doesn’t have credibility. As an institution, it is in the process of being destroyed by the left, by the Democrats, and by the Drive-By Media. Even to this day… There was an article in New Yorker magazine by Jane Mayer, and I spoke to Jane Mayer for this story because I was asked to. It’s a story about torture in the TV show ’24’. There are a whole bunch of different approaches that Jane Mayer takes, but basically she went out and she found people in the US military who are saying, ”24′, stop the torture, because you’re making US soldiers think it’s okay to do!’ I could not believe this when I read this stuff. As an aside, I told my friends at ’24’, ‘Don’t do this. This is a woman that tried to destroy Clarence Thomas with Jill Abramson, who’s the DC bureau chief of the New York Times,’ but it was too late.

We’ve gotten to the point now where a television show is being used to destroy the US military, folks! A television show! We’ve had Abu Ghraib. We’ve had Club Gitmo. There is an all-out assault on the US military. Forget the president. We now are living in a world where I don’t know what percentage of the population of this country thinks the US military is indeed the focus of evil in the modern world. Now, many of the American left have always thought that and they’ve the military, and they have done everything they can to discredit it over the years, but it has just gotten magnified and worse — and now the US military is nothing but a bunch of rapists, predators, murderers! We get e-mails like we get here from soldiers and airmen like Tazz who don’t understand why the American people don’t understand the good work they’re doing. Tazz, it’s far worse than you realize! There’s a good, decent size of this population that still has a tremendous love and respect for the military, and I think it’s still the majority.

But the number of people who have a distrust and a building dislike, bordering on hatred, for the military is stunning as well. That number is stunning, and it’s not an accident, and it has nothing to do with what the military has or hasn’t done. It has to do with the image that’s being created by the American left and the Drive-By Media, to the point of taking a television show — this is a long piece in the New Yorker magazine, and it is replete with some of the most ridiculous stuff that I have ever seen. So the military is nothing more than a bunch of torturers and cheaters. It’s incredible. So when you talk about the problem here with the war in Iraq is Bush’s credibility, it goes far farther than that, to the extent that the president is involved in this. You can have all the commentators in the world — like me and others — singing the praises of various things, be it individuals or the military or what have you. But (sigh), folks, we’re no match for a nationwide left-wing media, both national and local, which is willing to destroy every institution and tradition which has defined this country’s greatness in the past — if at the top you don’t get similar rebuts.

If the administration… (Sigh.) This is hard to say, but if there are positive stories to be told, if there’s good news to be told, it’s gotta come — and the chief executive has to be willing to engage his opponents rather than embrace ’em, rather than meet ’em halfway, especially when it comes to preserving the institution of the military and especially when we’re at war, a war he considers serious, a war against terror, people that want to destroy our way of life. Where’s the compromise here with people who want to invest in defeat? I don’t understand why you have to be bipartisan when it comes to victory and defeat! Where in the world is there a middle ground on victory and defeat when you’re talking about the country and the US military, the left versus the right in this country? ‘We must get along, Mr. Limbaugh! We must compromise. Partisanship is ripping the country apart.’ (Ahem) Left-wingism, liberalism is ripping the country apart! You Libertarians out there, God love you, but it’s time you took a stand here. You sit there and have all these lofty opinions — and you moderates, too. It’s about time you took a stand and understand what is really at stake here and what’s happening, because we’re only talking about the future of the country.