RUSH: Last night on CNN’s Paula Zahn Now they were talking about hip-hop, the music, the culture, and the lyrics. Somehow my name came up in this discussion. The guest was somebody named Cliff Schecter, an expert. Never heard of him. He’s from AmericaBlog.com, and this is what he said.
SCHECTER: There’s misogyny throughout our culture. We just elected a new speaker of the House and Nancy Pelosi is a woman and all we heard all week were on her pantsuits, what this one looked like, what that one looked like. We didn’t hear things about policy. You’ve got people on the right who are going out and screaming every day, people like Rush Limbaugh who scream feminazi, feminazi, feminazi. 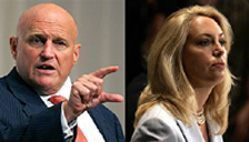