Talking to the Iranians STILL Makes No Sense

RUSH: I mentioned in our last call the good neighbor meetings, the good neighbor policy between the Iraqis, the Iranians, the Syrians, and us. I have a few items on this today. I caught hell last night from people in the e-mail. ?I’m sick of you bashing Bush! It’s bad enough when I have to listen to other Republicans bash Bush on cable TV. You don’t know what you’re talking about! Fallujah? You don’t know what you’re talking about in anything! Sadr? Now here you are, ?It’s not going to affect the policy at all if we talk to them.? The war plan is still the same. Why are you so upset? I?m sick and tired of you bushing Bush!? They were all over the place. (interruption) No, no, no, no. I’ve not heard from the White House. I don’t to hear from the White House to get my mind right on this. I wrote a couple of these people back last night.
I said, “Look, you have to understand where I’m coming from. I to back these guys. But six weeks ago they say this has no chance, and I applaud them to the roof.” The e-mail said, ?We talked to the Germans in World War II. We talked to the Japanese in World War II.? It isn’t the same. We didn’t go out there and say we weren’t going to, and the level of talks that we had with the Germans? We didn’t get together with the Germans to figure out how to solve the problem with Japan, and we didn’t get together with the Japanese and ask them how we can solve the problem with Hitler. This is what I mean when I say I am the bulwark and the rock. None of this moved ladies and gentlemen. I’m just sharing with you the criticism and the grief and the veritable shouting. Some of this stuff was in all caps, which means people are shouting.
I want to support these guys. You people gotta know this. But six weeks ago, two weeks ago, they tell us this is . “We isolate our enemies. We don’t sit down with them and break bread and have tea and play the State Farm good neighbor jingle,” and then, lo and behold, they do it — and then they slough it off on the Iraqis and they say it’s the Iraqis. ?Well, the Iraqis told us — Maliki told us — they’re going to talk to them regardless so we’re going to go along.? I’m just saying, from my standpoint, six weeks ago they say they’re not going to do it. I praised the move. I defended it. I supported it. What am I supposed to do now, just cast away what I really think in order to be a cheerleader? Apparently that’s what some people in the audience want. But that’s not me.
Now, let’s look at the stack here. First up is a New York Times story: ?Iran to Take Part in Iraq Security Conference.? The good neighbors meeting. ?The top Iranian national security official, Ali Larijani, indicated Wednesday that Iranian officials would probably take part in a regional security conference on Iraq next month, which would include the first high-level diplomatic contacts between American and Iranian officials in more than two years.? Yeah, and prior to that we talked to them all the time. Carter talked to them ’til he lost his voice and his cardigan got holes in it. The EU’s been talking to the Iranians about nukes, and the nukes are growing, and the UN’s been talking to them and so forth. Yeah, a great track record out there on talking to them!
Well, I’m not sure about that.

One of my fears is that the decision to throw in here might mean that somebody up there thinks, It’s a genuine fear that I have. ?The Iraqi prime minister, Nuri Kamal al-Maliki, set a date on Wednesday for the conference: it is to be held March 10 in Baghdad.? Let me call up the calendar here. I need to find out what’s happening on March the 10th. It’s a Saturday, a slow news day. So Maliki is deciding when it’s going to happen, and it’s going to happen in Baghdad. ?The agenda will be how to rescue Iraq from a civil war that claimed about two dozen more lives.? Now, this is the New York Times, and I’m naturally skeptical. But for the sake of discussion, let’s assume that this sentence is accurate. ?The agenda will be how to rescue Iraq from a civil war that claimed at least two dozen more lives.? A civil war is what will happen if we leave. There might be some sectarian violence going on, on the part of Baghdad, one city, but it is not the country.
There’s no civil war in the north. There’s no civil war in the south. There’s no civil war in the west. It’s arguable that what’s happening now is a civil war. Anyway, here’s the agenda. We’re going to bring the Iranians in, who are responsible for this, and ask them what we can do to rescue Iraq from a civil war that the Iranians are sponsoring and funding. They’re providing personnel, and of course the bombs and explosives. All right. So the New York Times reports: ?Iran to Take Part in Iraq Security Conference.? The good neighbors meeting. The Associated Press has a story: ?Iran’s Participation at Summit Uncertain. Iran’s Level of Participation at Iraq Summit Uncertain; Arab Nations Still Have Doubts — Iran’s level of participation remained uncertain Thursday as Iraq pushed ahead with plans to hold a March 10 conference with its neighbors and key Western countries on the Iraqi security crisis. Some Arab neighbors like Egypt, for their part, still have grave doubts the gathering will accomplish much.? (clearing throat) They?re right. 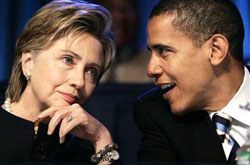 ?Iraqi Foreign Minister Hoshyar Zebari said Wednesday the Iranians had agreed to participate in a meeting with Iraq’s other neighbors. But he said ‘they have some questions’ about a separate session that would be held the same day with the five permanent U.N. Security council members the United States, Britain, France, Russia and China. His words seemed to indicate that Iran was at least partly unhappy with the arrangements for the conference. Iran has had little public comment on the conference so far beyond saying it would weigh attending and that it generally supported regional efforts to stabilize Iraq.? Yeah, and in the meantime, in a story dated today — these stories are Wednesday — the New York Times says: Oh, yeah, Iran’s going to be there, big time! Thursday: it’s not certain Iraq’s going to show up. Later today, this news hit.
?Iran’s president blamed the United States and Israel for the world’s problems Thursday,? This is about the billionth time he’s done the this year, ?in a lecture to Sudanese officials and intellectuals during his visit to Sudan. President Mahmoud Ahmadinejad’s comments came as Iran and Sudan face mounting international criticism – Iran over its nuclear activities and Sudan over the conflict in Darfur. In his lecture Thursday titled ‘Iran and the World,’ the hardline president reiterated arguments that he has made repeatedly throughout the standoff with the United States and its Western allies over Iran’s nuclear activities. ‘There is no place in the world that suffers from divisions and wars unless America or the Zionists’ fingerprints are seen there,’ Ahmadinejad told his audience in Farsi translated into Arabic. He urged Muslims to rally behind Iran and accused detractors of Iran’s nuclear program of trying to prevent a developing country from making scientific advances.?
All right, this is nothing new for Mahmoud to run around and say that the world’s problems are caused by the Israelis and by us, the Americans. So I do remain skeptical of the good neighbors thing. I know a lot of you think that it’s a tripwire; that it’s a gimmick; and if it’s tactical, then I will back off. As I said yesterday — I was very clear about this — if this is just a tactical move, and it doesn’t affect any other aspects of the policy, the war plan or whatever, then fine. Go out and have your tea and crumpets (singing) “Like a good neighbor…” H.R. says, ?A lot of neighbors t don’t like Iran but they get together.? Guess who’s going to Saudi Arabia? Mahmoud Ahmadinejad is going to make his first official state visit to Saudi Arabia! He?s going to go up there and he’s going to go talk to the royal family about whatever. Well, you might say, ?I would, too,? if you were Mahmoud, because the Saudis are afraid. Everybody there is afraid of the Iranians. So why buckle to them? Everybody is afraid of them. So we’re going to buckle to them. If this is not tactical, if this is strategic — if we’re really, really, really serious about having the Iranians solve this problem — count me out.