RUSH: Bob in Shreveport, Louisiana, welcome to the program. It’s great to have you with us.
CALLER: Rush?
RUSH: Yeah.
CALLER: Rush Limbaugh.
RUSH: Yes. 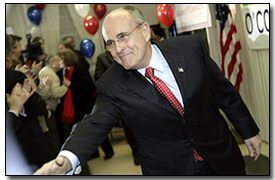 CALLER: Man, I’m a nervous wreck here. Rudy Giuliani, he has proven to be — well, I’m a little shook up here — I told Snerdley that I was a born-again Christian, pro-Second Amendment, pro-life —
RUSH: Do you believe in tax cuts?
CALLER: Do I believe in tax cuts? Are you kidding? I think we ought to abolish the tax system.
RUSH: What do you think about global warming? Just trying to get your profile here.
CALLER: I’m not a seminar caller, I promise. Global warming.
RUSH: No, no, no. You’re not a seminar calling, you’re giving your qualifications. I’m trying to establish them further.
CALLER: Okay, okay, what do you want me to tell you about global warming?
RUSH: Do you believe it or not?
CALLER: The last figure I heard was point something of a Celsius degree rise in the last six years or something like that from a true scientist that wasn’t brainwashed, that it was not being funded by the government, that was from private sources.
RUSH: Okay, you’re good to go. What was it that you wanted to say about Rudy?
CALLER: That he’s a man I want to vote for for president of the United States. I want him to run our country. I have a great theory that the terrorists were sent over here fat and happy and spoiled but the bombs haven’t started dropping here yet, and we need someone who is capable of leading under pressure. Rudy Giuliani, I don’t care about his personal beliefs, he has expressed the fact that he believes in law, and he believes in constructionist judges to interpret the Constitution. Did you see him talk at Stanford University on C-SPAN last week?
RUSH: No, I haven’t seen his talk at Stanford. He called me, talked about it, but I didn’t see the speech.
CALLER: He wants to put judges up there that will interpret the Constitution with —
RUSH: I’ve heard about that.
CALLER: Without injecting his personal beliefs.
RUSH: I’ve heard. Yes, he’s said that.
CALLER: We’re always talking about activist politicians, and we talk about activist judges, but we never talk about people who can actually lead.
RUSH: Well, look, I’m glad you’re for Rudy. I understand where you’re saying you’re for Rudy. You, by the way, are proof that Rudy’s strategy is working.
CALLER: One last thing, before we go.
RUSH: Yeah, what is it?

CALLER: Just real quick, I don’t know how much more time I have. I have to tell you that you once said that your grandfather touched people that touched Abraham Lincoln. Do you remember saying that?
RUSH: Yes.
CALLER: Now I have talked to a great American who has talked to some of the greatest Americans in this country. 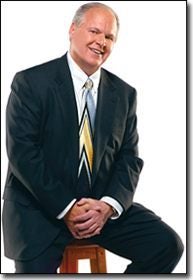 RUSH: Well, you’re very kind, sir. You flatter me.
CALLER: This is compliment therapy. (Laughing.)
RUSH: Well, really. (Laughing.) He’s saying that because he knows I’m not good at accepting compliments. He wants to make sure that I know that he’s sincere. I appreciate that.
CALLER: I understand your humility. You have a talent, a gift from God, and you’re humble about it.
RUSH: Well, I appreciate your recognizing that, too. Few people do, but I appreciate your recognizing that.
CALLER: Have a great day, Rush.
RUSH: You’re a great American and I’m glad you called. I’m very flattered. He proves Rudy’s strategery is working on the judges. I have explained it. You know, Rudy, with the Republican base, has a problem in that he is openly pro-choice. So what Rudy has done, in order to handle this, is just say, (paraphrasing), ?Well, yeah, I am, and I have always been, but I think it’s crazy that there’s Roe vs. Wade. Roe vs. Wade is rotten law. We need have a democratic decision on this rather than a bunch of judges deciding what is morally right and morally wrong, and people need to decide this. — and in that sense, I’m going to appoint strict constructionists to the court. I like Roberts and I like Scalia, and I’m going to appoint other judges like that.? Well, the message that he wants conveyed is that he’ll appoint enough judges that will overturn Roe vs. Wade despite his personal view on it, and that is evidence that Rudy’s strategy is working, at least with him and probably with some other voters as well.