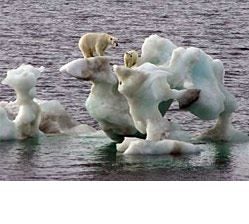 RUSH: One global warming sound bite of Sam Champion, who is the Good Morning America weatherman. He used to be the weatherman for WABC Channel 7 in New York. He’s become one of these activists now on global warming, admittedly so. ‘It’s too crucial to ignore.’ This morning on Good Morning America. He reported on protecting polar bears, &ldquo;Is global warming endangering them?&rdquo; There’s a bite in this from a guy named John Kostyack, somebody from the National Wildlife Federation. Now, this is old. It happened today, but it’s old news. Remember the picture of the two polar bears on the ice floe? That picture was taken in 2004, but the Drive-Bys and the environmentalist wackos and the global warming crowd put that picture out and made it appear that this is a vanishing glacier, and reported that the polar bears are ‘stranded’? This is also in Gore’s movie, and this is why little kids all over the world are crying because they think the polar bears are being killed by global warming, when in fact the truth is the original caption of the picture was that this is an ice floe, sort of a sculpture made by waves. It’s naturally occurring. It is not a broken off glacier. It’s not drifting off and the polar bears are not stranded.

Polar bears can swim 100 miles. They aren’t like us. We might be ‘stranded’ on an ice floe if there’s no land nearby, and we had no helicopter and no jet ski. We might be in trouble, but polar bears, and they can live in icy cold water by design. They love it. Have you ever been to the polar bear exhibit at the Central Park Zoo? I went to the polar bear exhibit, Central Park Zoo in June and it was scorching hot and one of the polar bears was nowhere to be seen. The other polar bear was outside and the zoo people had to come in with giant blocks of ice every hour or so for the polar bear to lay on. You talk about cruelty. Who’s doing more to hurt polar bears: the Central Park Zoo putting them out there in June in 100 degree temperature needing blocks of ice, or where they’re living, thriving naturally on these ice sculptures made by waves that had nothing to do with global warming or a melting glacier? It was so utterly false and propaganda — and here’s Sam Champion now on Good Morning America doing a story on how we’re killing the polar bears. 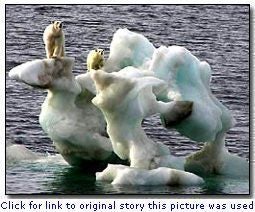 CHAMPION: The polar bear for many has become a living symbol of the dangers of global warming. The powerful kings of the arctic are finding their habitat shrinking.
RUSH: They’re not!
CHAMPION: Climate change is melting the icy terrain they need to hunt —
RUSH: It’s not!
CHAMPION: — also putting their future at risk.
RUSH: It’s not!
KOSTYACK: The habitat of the polar bear is literally melting away underneath it?s feet.
RUSH: It’s not!
CHAMPION: Eskimos considered them wise and powerful, dubbing them “the great lonely roamers.” But today the US Fish and Wildlife service is studying whether the remaining 25,000 bears are in danger of disappearing. Not everyone agrees the bears should be protected. Hunters, oil interests, even the state of Alaska has questions about the effects protection would have on oil and gas exploration and commercial shipping. But for many others, the bears are a symbol of a bigger crisis threatening the planet. 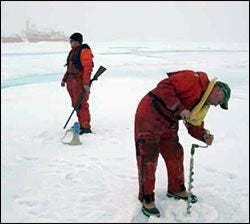 RUSH: Yeah, and you are all and whether you know it or not, you are lying to your audiences. This polar bear picture — and we’ll put it back up at RushLimbaugh.com when we update the website this afternoon to reflect the contents of today’s program. This picture was taken in The original caption mentions what I told you. They’re sitting there playing on this “ice sculpture” that was made by the waves. Another guy pretended he took the picture and put a different caption under it, mentioning that polar bear “stranded” on the ice floe or what have you. Now, the guy that took the picture from the website we found all this information on, also was up there in the polar bear region, North Pole and so forth with a buddy, an associate, and they were trying to drill a hole in the ice to take a measurement of the thickness of the ice to prove there’s global warming. It was much thicker than they thought. It took ’em a lot longer to dig the hole or to drill the hole. It was like a 12-inch hole.
The guy who was the associate is holding a rifle, watching guard while his buddy, the faux photographer, is drilling the hole. The story points out that the guy is holding a rifle in order to protect them from polar bears because if the polar bears find ’em they’ll attack ’em and eat ’em. These guys are prepared to a polar bear, rather than being eaten by it and save the planet. Now, if the polar bears are disappearing and you’re up there on their turf and you’re drilling holes in their turf that they might fall into, and they come along and they don’t like this — and you’re trying to protect them and the environment — let them eat you! It’s the least you can do. But, oh, no! They had shotguns up there. They’re going to fire at ’em. Everything I’m telling you is true. Now, I’ve met Sam Champion a couple times. He’s a nice guy, but somebody got to him and he’s been co-opted because this is absolute folly — total folly and BS, as it were.
BREAK TRANSCRIPT

CALLER: Rush. How are you?

CALLER: I want to go back to the global warming —

CALLER: — and propose to help you simplify it. I’ve been sitting here at home here in Hartford, Connecticut. We are at the butt end, if you excuse my impression, of all of the pollution coming from west to east, including all of the pollution from the coal-fired plants in Ohio where, you know, the government refuses to have them put scrubbers on the plants to take the pollution down.

CALLER: Let me try and, if I can, simply say the global warming discussion you’ve had today, I think, is a giant smoke screen. In fact, if you back it up — and I haven’t seen Al Gore’s movie — but my assumption is, from other readings that I’ve done, is that global warming, in theory, if it’s true, is caused by increased pollution from exhausts or whatever sources, and it degrades the ozone level —

CALLER: — and therefore we get more and more —

CALLER: — of the sun’s rays through and we are cooking ourselves. Is that correct?

RUSH: No. I’m just going to be as honest with you as I can.

RUSH: There is nothing in that that’s accurate.

RUSH: The ozone is not being depleted. We’re not cooking because of it. You’re freezing your tush out there in Hartford. Aren’t you curious about how this is happening?

CALLER: No, I’m not looking at… I think the science has looked at centuries, not March 8. It is cold today.

RUSH: China is not guilty of anything! They’re not even subject to any restrictions based on the Kyoto treaty. This is all aimed at the United States, but the vast majority of CO2, which is the number one greenhouse effect gas, occurs naturally: water vapor and other natural sources. Automobiles, these smokestacks in Ohio? (I told you people that they hate you in Ohio in the Northeast.) Four percent of green house gas is manmade.