RUSH: Snerdley handed me a news story today, and it’s kind of funny. He put a couple notes on here, and I would disagree with one of the notes that you wrote on this story. It is an AP story. It’s entitled, ‘War Protests,’ and basically the headline ought to be: The Kooks Revolt.

‘Some opponents of the Iraq war are taking their protests straight to Congress — staging ‘occupations’ in lawmakers’ offices on Capitol Hill and in their home communities. Rep. Rahm Emanuel’s office in Chicago was targeted Thursday. A day earlier, protesters were headed off before getting into House Speaker Nancy Pelosi’s office in San Francisco. &hellip; In a video posted on the Internet site YouTube, a Democrat lawmaker&hellip;’ and who is this? Obey? David Obey is all upset with this. He’s upset that the kooks are protesting Democrats, so he put a video on YouTube and he’s ‘seen pounding his fist repeatedly into the air, complaining loudly that Democrats don’t have enough votes to cut off war funding and the protesters don’t understand the debate in Congress. ‘That makes no sense. It doesn’t work that way,’ Obey says at one point. ‘We don’t have the votes.” Of course they don’t have the votes. All of this is purely symbolic. But those kooks, see, the Democrats claimed the mandate after the November elections, and those kooks bought it hook, line and sinker.

Those kooks think that they’re the reason the Democrats won the election, and those kooks don’t want any of this benchmark stuff and 180 days. They want them out yesterday, and the Democrats can’t deliver. So they’re protesting Democrat offices. Snerdley’s note says, ‘Libs, you made the kooks. You live with them.’ I disagree with you that they made the kooks. I’ve been thinking about this. Do you remember, I guess it was Wednesday on this program, I got a little frustrated, and I did something I never do. I did something that I’ve never done. Everybody was calling here, ‘You’re not doing enough. You need to do X, Y and Z. What are you doing with the power you have? You have so much power.’ I finally, in a very restrained and controlled matter, said, ‘What more do you want? I gave you a Republican Congress in ’94. I gave you a Republican Senate. I spawned an entire conservative media. I spawned other talk shows. I spawned blogs, spawned a conservative-oriented Fox News cable network. We got you a Republican president in 2000 and 2004,’ and I said, ‘If you don’t believe this, where were we in 1988 when I and I alone started?’

I felt bad after doing that. All of this is true, but I think that’s for others to say. It’s gratuitous when I say it about myself. But in the process of thinking about this that night, and feeling a little guilty that I had been so blatantly honest talking about myself… It’s unseemly to go out and shovel credit your own way. Credit is for others to grant and give, and I felt bad about it. But then I’ve started thinking all of the calls for bipartisan, to end the horrible partisanship, and why we’ve never been more divided, people say, and the rhetoric and the incivility reached new lows and so forth. I’m thinking I’m probably responsible for that. I think, Mr. Snerdley, I have created the kook left. I think I have driven them insane. I think I’m the reason the left-wing blogs exist. I think I’m the reason there is so much hatred. Look, since I’ve started they have done everything they can to take me down and to take me out. They have tried their own liberal hosts and networks.

They are a laughingstock. They are bankrupt. They don’t go anywhere. Anybody who is anybody in other forms of show biz wants to get into radio now because that’s where they think the impact is. From stand-up comedians to movie stars to ex-actresses — Jane Fonda, Whoopi Goldberg — everybody wants to come to radio now. Of course radio managers get star struck just like anybody else, so they’re eager to take all these no-talents that have never had any radio experience and put them on. In the process here, radio has become a focus, and the left cannot get a foothold in it no matter what they do. Partially the reason I think that I’m responsible, is the kooks were far mellower when they ran the show. When the Democrats ran Congress for 40 years, and they had Bill Clinton in office and so forth, everything was just great. The Republicans behaved themselves by shutting up and staying silent, reducing numbers like 190 in the House of Representatives. Bob Michel, the Republican leader in the House, was happy if he got to play golf with Tip O’Neill now and then — and those days are over. 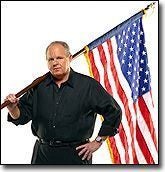 Then Newt Gingrich came along and won the House in 1994. I actually think that I and the ribald success of this program and everything else that it has spawned has actually created the seething rage and hatred on the left. I’m dead serious. I think I’m responsible for it. Now, let me add a caveat. I’m not responsible for the way they speak. They are not imitating me. They are not copying me. They’re not saying, &ldquo;Well, if Limbaugh does it, we can do it.&rdquo; They are who they are. What I have done is take away the shell of pretense, this cocoon of pretense that they lived under, that they were the nice ones, the tolerant ones, the compassionate ones. All the masks are gone, the camouflage is gone. The left has been exposed for what it is and who they are — and I, ladies and gentlemen, did it.

I am not going to apologize. I’m very proud of this. I think it’s very, very opportune for everybody to learn who the left is, who they are, what they are. So I raise my hand and I claim all credit for creating the incivility on the left, the anger, the seething rage. I know Bush has done his share of it since 2000, but it started long before that — and I’m the one that did it. Before me, they were just obnoxious and arrogant and condescending, but now look. They’re going insane! They’re insane many places out there, protesting their own congressman. Pelosi’s off trying to overrun it in protest because they won’t get us out of Iraq. They haven’t the slightest clue that the Democrats haven’t the power to do it. The Senate Democrats have zero power. Anyway, I was thinking about it. So Snerdley writes his note here, &ldquo;Hey, libs, you made these kooks. You live with them.&rdquo;

RUSH: I’m not kidding, folks. We have words that are so heinous, they have been all but banned by the left. The N-word. The F-word before Ann Coulter. (That’s the four-letter word.) The F-word Ann Coulter. ‘(The word that stands for cigarette.) But the real unmentionable is the R-word.

Try that in leftist circles and see what happens.