GOP Base Excited About Fred Thompson

RUSH: Speaking of Republican front-runners, Fred Thompson let it be known over the weekend that he’s interested in the nomination. We’ll review some of his positions on issues. I’ve been checking my e-mail over the weekend since this happened. I’m getting e-mails from people more excited about Fred Thompson than any of the candidates who are currently in the race. Snerdley in there ducking his head. 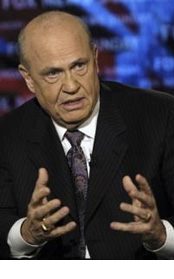 FRED THOMPSON: I’m giving some thought to it. I’m going to leave the door open. It’s not really a reflection on the current field at all. As you know, some of them are very good friends of mine. I’m going to wait and see how it pans out, see how they do, how it develops.

RUSH: I think Newt Gingrich is doing this, too. I think Newt’s waiting. These guys are going to eat themselves up with so much time before the fall even gets around. The first primary is not for something like nine months now. You might be interested in Fred Thompson on the issues. He’s not as well known issue-wise as perhaps Giuliani and McCain. He’s maybe on a par with Mitt Romney. But here’s just a little summary of his position on various issues. He’s pro-life. He believes that federal judges should overturn Roe vs. Wade. (He thinks it’s bad law and bad medical science.) He opposes gay marriage but would let states decide whether to allow civil unions. He says marriage is between a man and a woman; judges shouldn’t be allowed to change that. He opposes gun control. He praised last week’s 2-1 federal appeals decision overturning a long-standing handgun ban in the District of Columbia. His remark was basically the court said the Constitution means what it says. He supports the surge, the increase of troops to Iraq, and said, ‘Wars are full of mistakes. You rectify them. I think we’re doing that now. We’ve got to give it a chance to work.’

He said he would pardon Scooter Libby on his conviction for perjury and obstruction of justice, and he would do it now rather than waiting until all of his appeals are exhausted. I got a bunch of e-mails from people over the weekend after this had been announced that were very excited. Look, this is anecdotal. I’m not saying this means anything. I’m just sharing with you some of the reaction. I haven’t gotten it about any of the others. The closest to it would be Giuliani, I guess, but not in the scope of what I got from people talking about Fred Thompson. He is thought to be authoritative with a lot of presence and so forth and so on. It gets more and more interesting out there. Then in the Prowler at the American Spectator.org: ”Anyone who doubts that [former Sen.] Fred [Thompson] isn’t the real deal needs to look at his performance on Sunday and rethink things,’ says a senior Republican National Committee official. ‘You can’t watch him or read the transcript and wonder what the dynamic would be like with him in the race.’ He’s referring to Thompson’s appearance on Fox News Sunday, where, unlike candidates like Gov. Mitt Romney and Sen. John McCain, Thompson has no problem addressing where he stood on issues from abortion, gun control, and campaign finance reform. ‘It isn’t just Fred,’ says the RNC official. ‘You see and hear [former Gov.] Jeb [Bush] and you realize what the GOP field is missing. You see those two guys and you want to vote for them. With most of the guys in the race now you just feel like eventually you’re going to have to vote for them simply out of party loyalty.”

This is an RNC official speaking.

‘Thompson has no campaign staff in place and is not seeking support from his former colleagues in the Senate, despite published rumors that former Sen. Howard Baker was on Capitol Hill last week seeking support for him. ‘Thompson wouldn’t do that to McCain and [Sam] Brownback and other former colleagues,’ says a Republican Senate leadership aide. ‘My understanding is that some members asked Baker about what he thought Thompson was doing, and Baker answered honestly: he didn’t know. Baker was not pushing Thompson up here.”