RUSH: This morning in Mexico at a joint news conference with the president of Mexico, Se&ntilde;or Calderone, an unidentified reporter asked President Bush: ‘The attorney general acknowledged yesterday that there were mistakes in the firing of prosecutors. What’s his future in your cabinet? Do you have confidence in him, and more importantly, how effective can he be in Congress going forward when he’s lost a lot of confidence among Democrats and doesn’t have many defenders among Republicans?’ 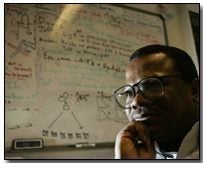 THE PRESIDENT: I do have confidence in Attorney General Al Gonzales, and we talked about his need to go up to Capitol Hill and make it very clear to members in both political parties why the justice department made the decisions it made; make it very clear about the facts — and he’s right, mistakes were made, and I’m, frankly, not happy about it, because there is a lot of confusion over what really has been a customary practice by the presidents. US attorneys and others serve at the pleasure of the president. Past administrations have removed US attorneys. It’s their right to do so. The justice department recommended a list of US attorneys. I believe the reasons why were entirely appropriate. And yet, this issue was mishandled to the point now where you’re asking me questions about it in Mexico.

Who’s he upset about here? (interruption) Oh, he’s dumping on the chief of staff? Gonzales’ chief of staff, that’s who it is you think he’s dumping on? Oh, this guy, he’s saying that the chief of staff to Gonzales didn’t go up and give Congress all the facts about this. Oh, okay. Yeah. The president’s on both sides of this. He’s trying to give both sides a little of what they want. He did defend his actions. ‘Hey, it’s no big deal. This happens all the time. They serve at the pleasure of the president. Past administrations have removed US attorneys. It’s their right to do so,’ so forth and so on. But anyway, at least it came up and he discussed it at a press conference with the Mexican president, Calderone, who said he, too, is upset about the fence that we’re going to build.