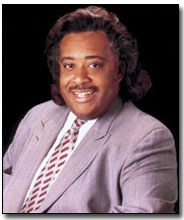 RUSH: Ladies and gentlemen, Mr. Snerdley was away yesterday. The plumber had to come to his house. (The other day he was gone to get his car washed. Yesterday it was a plumber.) He didn’t hear the Al Sharpton megaphone bullhorn bit with Sharpton outside Obama’s headquarters, and you gotta hear this. You gotta hear this, Mr. Snerdley. So here it is.
(Playing of First Sharpton/Obama spoof.)
RUSH: Your mama is so fat, scale of one to ten, she’s a 747. Ladies and gentlemen, Al Sharpton did not leave Obama’s headquarters. He had even more to say.
(Playing of Second Sharpton/Obama spoof.)
RUSH: Reverend Sharpton, of course, is upset that Obama is not down to the struggle and is replacing civil rights activists and leaders like himself and the Reverend Jackson.