Susan From Alamo All Riled Up Again

RUSH: Susan in Alamo, California, calling back to again apologize, are you?

CALLER: No, I’m just calling back because I’m a little disappointed in you, Rush, for just sitting back taking Arnold’s insult that you’re irrelevant. You are the father of conservatism. How can you sit back and let him say you’re irrelevant when it was you that helped Arnold get elected governor? He’s the one that’s irrelevant, Rush, because his term is going to expire, and you’re just going to keep going on and on with your radio show forever.

CALLER: Well, your call screener said to be short and to the point that you remembered me, and I guess you did, but, you know, I didn’t want to take all the blame for it, so I though I’d —

RUSH: Well, of course I remember you because you’ve also called not long ago to apologize to me for not believing me when I told you Arnold was not a conservative.

CALLER: And I agree, and I’m so mad at him, but I’m disappointed in you. Do you really want that peace prize? Is that why you’re just sitting back taking it? 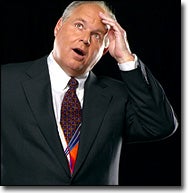 RUSH: You know what you’re mad about? You’re mad because I was a nice guy and I gave him the benefit of the doubt.

CALLER: Well, Rush, I think the reason, I’ve got theory here, two theories why he’s turned left, and one of them you already mentioned. He’s probably, you know, after he’s governor, he’s going to go back and make more movies and he has to get in the good graces of the Hollywood left. The other thing is, I think maybe, perhaps, since he can’t run as president that he’s got some deal cooking up with one of the Democrat candidates for president to be on their cabinet. That’s the only reason I can think why he’s turned left. Do you have any other reasons?

RUSH: Well, there’s a multitude of possibilities. We could speculate on this all day and night but we’re never going to know the answer. There’s the wife. There’s the Kennedy family. There’s any number of things. Your example about Hollywood.

CALLER: Do you think he has a deal going, though, with one of the presidential candidates like Hillary? Because he said, ‘Oh, we shouldn’t criticize Hillary.’ Do you think he knows something that we don’t, that she’s going to become president and he’ll get on her cabinet?

RUSH: Anything’s possible, but to speculate on what we don’t know is kind of meaningless. We’ll find out in due course.

RUSH: What does it matter why? The fact is he no longer is even pretending to be a conservative. He’s trying to say he’s a centrist when he’s a liberal. What else matters?

CALLER: Well, it matters because we can learn a lesson from Arnold, and my problem, my dilemma is —

RUSH: You didn’t learn the lesson because I tried to tell you.

CALLER: No, I did learn a lesson.

CALLER: I was hoping he’d be the next Ronald Reagan, but my dilemma is, Rush, this coming presidential election, do we go with our heart like Newt Gingrich, or do we go with somebody electable again like Rudy Giuliani? And how did we hold their feet to the fire once they’ve won?

CALLER: You’re the greatest mind I know so I’m asking you all these questions.

RUSH: This is what I said. You know, if you’re going to call here and raise hell with me, at least listen to what I said before you do it, Susan.

RUSH: I’m not your husband.

RUSH: Newt? Newt’s not in. Let’s leave Newt out of this for a second.

RUSH: I don’t know yet. I haven’t the slightest clue. It’s too soon. Give me a break here.