RUSH: The Arnold-Rush , is still being discussed on the Left Coast on day three. Yesterday morning on the KTLA Los Angeles television morning show, anchorette Cher Calvin talking with anchor Carlos Amezcua and an unidentified anchor. The guest anchor is 90210 actor Ian Ziering, and they had this exchange about me and the . 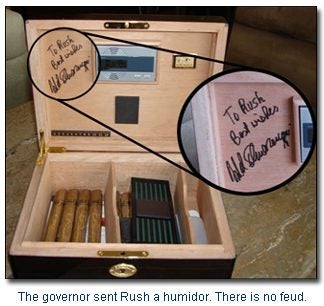 CALVIN: Let’s talk about the war of words between Governor Arnold Schwarzenegger and Rush Limbaugh. It has actually simmered down quite a bit. The governor struck a favorable nerve in Limbaugh when he suggested that the two get together to smoke cigars. Is this a good example of what America is about?

AMEZCUA: Here’s the thing. If Rush Limbaugh is ‘irrelevant,’ what’s the governor doing on his radio show?

AMEZCUA: Obviously there’s some relevance to what Rush Limbaugh is doing.

ZIERING: Obviously people are listening to it. Rush says things that, raise people awareness, this is what happens. So, he’s not irrelevant at all.

CALVIN: And clearly, with so many listeners, he does have some relevance as well, right?

RUSH: ‘So many listeners, he does have some relevance as well, right?’ That’s a little happy talk from the KTLA morning show in Los Angeles.