RUSH: You gotta hear these next four sound bites. President George W. Bush fired up. It sounds like he’s finally gotten mad and he’s calling Democrats by name. He’s not saying my opponents, my respected good friend opponents. He’s calling the Democrats. He’s calling them on the carpet. This happened about a half hour ago. He had a bunch of military personnel standing behind him. This is the president, first of four bites, responding to the House Democrats passing their pork bill.

THE PRESIDENT: Here in Washington members of both parties recognize that our most solemn responsibility is to support our troops in the war on terror. Yet today, a narrow majority in the House of Representatives abdicated its responsibility by passing a war spending bill that has no chance of becoming law and brings us no closer to getting our troops the resources they need to do their job. The purpose of the emergency war spending bill I requested was to provide our troops with vital funding. Instead, Democrats in the House, in an act of political theater, voted to substitute their judgment for that of our military commanders on the ground in Iraq.

RUSH: You hear him hammer that? Democrats in the House in an act of political theater. Here’s the next bite.

THE PRESIDENT: They set rigid restrictions that will require an Army of lawyers to interpret. They set an arbitrary date for withdrawal without regard for conditions on the ground. And they tacked on billions for pet projects that have nothing to do with winning the war on terror. This bill has too much pork, too many conditions, and an artificial timetable for withdrawal.

RUSH: Yeah. This is the bribery bill. Nancy Pelosi, The Briber. She had to pay off her recalcitrant, ununified Democrats in order to get them to support this thing. Here’s more from the president.

THE PRESIDENT: I will veto if it comes to my desk. And because a vote in the House was so close, it was clear that my veto would be sustained. Today’s action in the House does only one thing. It delays the delivery of vital resources for our troops. A narrow majority has decided to take this course just as General Petraeus and his troops are carrying out a new strategy to help the Iraqis secure their capital city. Amid the real challenges in Iraq, we’re beginning to see some signs of progress. Yet to score political points, the Democratic majority in the House has shown it is willing to undermine the gains our troops are making on the ground. Democrats want to make clear that they oppose the war in Iraq. They made their point. For some, that is not enough.

RUSH: Do you realize the power of what he just said? ‘Yet to score political points, the Democrat majority in the House has shown it is willing to undermine the gains our troops are making on the ground.’ Yes, they own defeat. I talked to you about the pictures I had to dig through the LA Times to find, not on the front page of the New York Times. No, no. A big carnival in Baghdad, where there’s supposedly a civil war going on, the insurgents are killing innocent women and children each and every day, it’s a horrible thing, so sad, very sad. Yet there they are, snow cones, Ferris wheels and all this stuff, smiling to beat the band. Baghdad. Who would have thunk it. 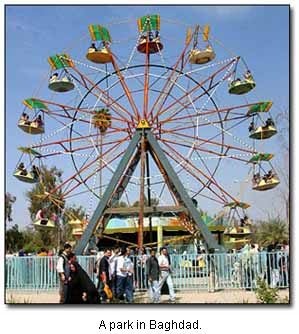 New York Times today, headline, ‘Reclaiming Homes, Iraqis Find Peril Still at Door.’ Well, how stupid of these Iraqis. They’re going back home, it’s safer. But guess what? It’s still bad, says the New York Times. Why are they going home? Why are they returning to their homes in Baghdad? Well, it’s still bad out there, says the New York Times. But even they conclude in this story, a security plan could eventually work. ‘Though hundreds of thousands of Baghdad residents remain displaced, officials say the steady flow of people returning is an indication the security plan could eventually work,’ damn it. So the president says, ‘To score political points the Democratic majority in the House has shown that it is willing to undermine the gains our troops are making on the ground. Democrats want to make clear they oppose the war. They made their point, but for some that is not enough.’ One more from President Bush.

THE PRESIDENT: These Democrats believe that the longer they can delay funding for our troops, the more likely they are to force me to accept restrictions on our commanders, an artificial timetable for withdrawal, and their pet spending projects. This is not going to happen. Our men and women in uniform need these emergency war funds. The secretary of defense has warned that if Congress does not approve the emergency funding for our troops, by April the 15th, our men and women in uniform will face significant disruptions, and so will their families. Democrats have sent their message. Now it’s time to send their money. This is an important moment of decision for the new leaders in Congress. Our men and women in uniform should not have to worry that politicians in Washington will deny them the funds and the flexibility they need to win. Congress needs to send me a clean bill that I can sign without delay. I expect Congress to do its duty and to fund our troops. And so do the American people.

RUSH: And the president turned around, a bunch of military people in uniform standing behind him, he turned around, he looked at them, you could see the look on his face, ‘I am your commander-in-chief. I have your concerns. I’m the one that’s on your side.’ You could see that look on his face. So that’s it, April 15th. I mentioned this earlier in the program, and this is going to be very interesting, because I wouldn’t put it past the Democrats to make sure there’s not a bill the president can sign by April 15th and let the troops suffer the recriminations of underfunding, and then you see what the American peoples reaction will be, because I don’t care what their attitude on the war is, they don’t want the troops underfunded and the American people do not want the US military to lose. The Democrat Party does. The Democrat Party owns defeat. They don’t care if we lose. All that matters to them is that they do two things: They placate the kooks on their fringe that dominate their base, and number two, set themselves up for what they think will be a massive electoral victory in 2008. And they think this is it.

They are becoming the McGovern party. They’re setting themselves up for a humiliating landslide defeat somewhere down the road, and they don’t even see it. They think they are recreating moments from their past of great virtue and valor, of great strength. Remember McGovern lost in a landslide to Richard Nixon. This is who they are. You could say this is who they are becoming, but they can’t become who they already are. They own defeat. They have the deed. There have been no cosigners. The Democrat Party put no money down, they didn’t borrow any money to own this defeat; they paid for it in full, up front. They continue to do so now. Now, some people might say, ‘Ah, Rush, they’ll back off now that they’ve made their statement.’ They’re going to feel their oats. I’m going to guarantee you, the Drive-By Media, if you waste your time watching them this afternoon and tonight, they’ll let you hear the same sound bites I just played of President Bush, and they’ll talk about how he’s out of it, the man is delusional, he’s lost touch with reality, why, he doesn’t even know what he’s talking about. It was 218-212, and without bribery and pork this bill would have never passed. The Democrats in the House are in disarray. This bill changes none of that, and they have put that on display for anybody who is watching to notice.