RUSH: Democrats are in disarray in the House. Before I went out to dinner last night, I’m reading the websites, doing a little show prep for the program today –and the news is they’re going nowhere. Pelosi can’t keep the place in order. The DC vote bill (Eleanor Holmes Norton, this is her baby) is going down the tubes. Steny Hoyer was yelling at staff. The Democrat House just can’t get anything done on this Iraq war bill. They want a definite withdrawal date of March of 2008. This is the bill: the president’s asked for a hundred million and the Democrats have loaded $24 billion of pork into it. A bunch of lib Democrats, the Out of Iraq Caucus, want to vote for this. They want a clean bill, and the Democrats are having trouble holding them together. Finally, enough arms were twisted that the Democrats claim that they have the votes today.

While all this is going on, Pelosi’s in New York last night attending a fund-raiser for the Democrat Congressional Campaign Committee, having a five-star meal herself, while her lieutenants are doing everything they can to keep the place in order. That’s before I left my humble abode and drove two doors down. I probably drove 50 yards to get to dinner. (Laughing) ‘Why didn’t you walk?’ I could just see the&hellip; Well, it’s a little farther than that, but you don’t walk anyway. I mean, the wind, just — nah. You want to get there fast, get home fast, and so forth. At any rate, I got home, and all of a sudden none of that’s happening. All this disarray has somehow been quelled. They put it all back together. It’s all fine and dandy! That’s an illusion. ‘Liberal opposition to a $124 billion war spending bill broke last night, when leaders of the antiwar Out of Iraq Caucus pledged to Democratic leaders that they will not block the measure, which sets timelines for bringing U.S. troops home.’

Now, as I say, all the stories that I saw before I left home last night were of Pelosi losing the House and her caucus. Now, they’re going to have this vote today. Even if she wins, they are a divided caucus. She has big problems with her own party. This bill’s not going to go anywhere in the Senate. Something also is happening in the House that’s a little surprising. Republicans, the minority, are succeeding in pulling off a bunch of parliamentary procedures that are causing Democrats to scuttle other bills. What’s happening on the DC vote bill is the Republicans snuck a little provision in there banning the DC gun law, and of course the libs are not going to go for that! So Eleanor Holmes Norton is in tears. She’s beside herself that her little baby, the bill to allow Washington residents the vote is going to go down the tubes.

Of course, that’s unconstitutional. If you read the Constitution, it’s clear that DC is a . It’s not a state. Therefore, its residents don’t have a vote in federal elections. So the bottom line here is that the Democrats have paid a price. They have demonstrated that they are weak; they’ve demonstrated that they have to buy votes in their own caucus. Everybody thinking this is a united, amalgamated bunch, it ain’t the case: $24 billion of pork, $25 million for spinach, for example, for some big Democrat donor out in California. They had to bribe their own members with billion dollars of pork to get their vote — and they lost the DC vote, too, as I say, which is terribly, terribly, terribly upsetting to Eleanor Holmes Norton.

RUSH: All right, let’s go to the audio sound bites. We’ll start late yesterday on the House floor. This is during the debate on the appropriations bill. A hundred twenty-four billion dollar bill that’s got $24 billion of pork in it — and, by the way, it will be interesting to see what happens in the Senate on this. The Senate, they’re not going to have the votes to pass this.

The question is, will the president veto it? He said he would. He just wants a clean bill for Iraq and Afghanistan funding. However, the Pentagon, Robert Gates, the defense secretary, is saying, ‘Hey, we’re going to need this money by May 15th or we gotta pull back training; we gotta pull back a whole bunch of things.’ So there’s pressure here, and the way I read the story is the president might be pressured into not vetoing this if it passes this way to get money. We’ll have to wait and see. Here’s Delegate Eleanor Holmes Norton. She’s pleading here with her Democrat colleagues on her bill to allow DC residents the right to vote in federal elections.

RUSH: So what? It’s what the Constitution says. It’s an unconstitutional thing anyway. Of course that doesn’t matter. We’re talking about voting rights, civil rights and/or people’s feelings. Now, you may have heard late yesterday afternoon that Steny Hoyer lost control of the leadership in the House. There were arguments among staff on the floor when they couldn’t get anything going on the funding bill. Liberals, anti-war liberals in the House Democrat Caucus were still holding out on the House floor. This is a little bit of it. Steny Hoyer and his staff get into a shouting match, and they had to be quieted down by the substitute Queen Bee in charge. That would be Ellen Tauscher, because Pelosi was at a fund-raiser in New York.

TAUSCHER: Pursuant to Section 2 of House Resolution 260, further proceedings on the bill will be postponed. The gentleman from Indiana.

SOUDER: Did I understand that because of the motion to recommit–

TAUSCHER: (banging gavel) The staff in the rear of the chamber will please quiet their remarks.

RUSH: This was Hoyer’s staff. They were shouting back there. There were all kinds of arguments. Hoyer could not believe that his staff hadn’t gotten everything in line and that his vote was going down. Now, remember, this is late in the afternoon. The vote was going to go down the tubes. Now ‘Baghdad Jim’ McDermott was on the House floor during debate on the appropriations bill.

MCDERMOTT: Speaker Pelosi has given us a plan. Not as strong as I want, but one I will support as a bare minimum — bare minimum, but dramatically better than what we have: a war without end, from a president incapable [sic] of only escalation, not negotiation.

RUSH: All right, so they began to turn some of the caucus members, the get Out of Iraq Caucus, because clearly McDermott here, ‘Baghdad Jim,’ thinks that Pelosi’s plan is lousy but he’s going to support it anyway because he’s fed up with all this piddling around. Now, Jack Murtha on the floor of the House late yesterday. He just literally loses it here. 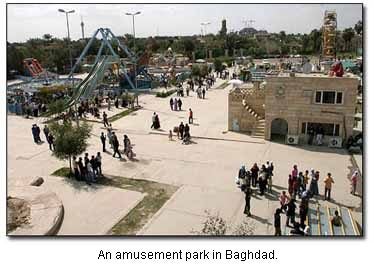 RUSH: And that’s what he wants! But the bottom line is that the surge is working. In fact, there were some pictures — and I found it very interesting these photos didn’t make it to the front page of the New York Times. They were in the LA Times. You had to hunt for them, but it was a story about a bunch of Iraqis having a carnival in Baghdad. They had ferris wheels, little rides for the kids and what looked like snow cones. They were just having a grand old time right here in the middle of a ‘civil war,’ led by insurgents where innocents are being wiped out by the gazillions each and every day.

Smiling little parents and smiling little kids were just having a great time. It looked like they were at the county fair. There’s much less activity going on insurgent-wise, and here’s Murtha still acting like this is a lost cause and going nowhere. But anyway, the point of all these bites is to illustrate for you the lack of unity, the disarray — and even after they pass the bill, if they do today, they have demonstrated that they’re weak. They’ve demonstrated they have to buy off their own members in order to get votes for this thing — and some of the get Out of Iraq Caucus, such as Maxine Waters, are still not happy with all this. For example, John Lewis. This is what he said.

LEWIS: I’m not prepared to vote for another dollar, another dime, to support this war. It is time to bring our young men and our young women home.

RUSH: And here’s Peter DeFazio, a Democrat from Oregon.

DEFAZIO: This is the first enforceable challenge to the president’s plan to escalate and continue a stay-the-course, open-ended commitment to a war, a war that was launched with massive deception, an unnecessary war.

JOHNSON: The people of the Fourth District, by and large, are ready for this war to come to a [sic] end, and they want to see a cessation of deaths of United States soldiers in combat on the streets of Iraq, and they want to see that happen now. Politically, the reality is that you just can’t yank the troops off the streets. You just can’t leave them without the funding that they need in order to wind this process down.

RUSH: You see? These guys, they don’t know what to do. They’ve got this March ’08 deadline, which is pulling them out. You set a deadline, and you may as well pull them out tomorrow. It’s asinine. Here’s David Obey, during the debate on the appropriations bill. This speaks for itself.

RUSH: Obey is not talking about Republicans here. Remember, Republicans were not part of this. David Obey is getting frustrated. Basically the way to translate this bite is: ‘Look, guys, we control the House and we still can’t get our way here. We control the House and we can’t get our act together. I’m getting tired of it. Some of you Democrats in here, I’m getting fed up with you. You have been wrong from the beginning, and some of us have been right from the beginning, and I’m getting tired of it.’ The Washington Post, again today in an editorial, slams the House for mandating this withdrawal from Iraq. The Washington Post in an editorial yesterday, slammed the Democrats in the Senate on the Judiciary Committee for the way they’re overreaching on this US attorney thing.