A Limbaugh Echo from Castro? 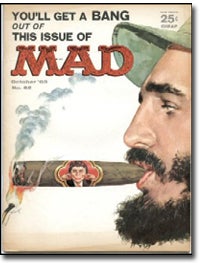 RUSH: All right, Fidel Castro has hit out at US biofuel use. He’s written an op-ed. Castro ‘signed’ an op-ed. People are speculating, ‘Hey, hey, hey, hey! His health is coming back.’ This op-ed was in their state party newspaper down there, . Castro ‘strongly criticized the use of biofuels by the US, in his first article since undergoing surgery last year. He said George W Bush’s support for the use of food crops in fuel production would cause 3 billion deaths from hunger. The article in the Granma newspaper did not mention Mr. Castro’s health.’ Some people think that Castro may have a point here. He’s basically talking ethanol and sugar. Sugar is a big export crop (well, as big as the Cubans have anything), and bigger than tobacco for them down there. Of course, he’s talking about ethanol. He’s referring to the rising price of corn around the world. I’ve predicted this. Castro, I hate to say this in a way, but he’s just echoing sentiments that I have offered on this program previously, although I never put the death toll at any specific number. This is going to give the leftists pause, because they love Castro. He fits the mold perfectly. Why do they love Castro? He’s just a poor little guy down there trying to do the best for his disparaged people. His people are wandering in virtual poverty. His people may have so-called great health care, but look: the infrastructure of Havana is falling apart. The great art deco, the buildings, they’re literally crumbling. There hasn’t been any infrastructure rebuilding, remodeling, reinforcement, nothing. Leftists will not say, ‘Well, that’s because you’ve got a socialist country down there and all the money goes to Castro and the government and they keep it, rather than spend it on the country and the people who live there.’ They’ll conclude that. They’ll just look at these people, and they’ll end up saying it’s the United States’ fault because of our embargo. Then they’ll say, ‘Poor little Castro. He’s such a brilliant man. He has stood up to the evil beast. He has stood up to the devil itself, the United States of America. He doesn’t take any grief.’ He’s admired for this. Castro’s entitled to do whatever he wants and say whatever he wants. Now he’s come along and he’s taken issue here with one of the big movements of the American environmental left, and that is biofuels. But don’t expect Castro to be criticized by any of the people who would normally criticize someone who says that US biofuel use will kill three people, because he’s entitled. ‘He’s entitled to make a mistake. ‘He’s so frustrated. He’s just so frustrated! He’s been trying to make his island nation a paradise and here in the way is the evil United States, from Lyndon Johnson on. It’s just horrible — and these insane Cuban exiles in Miami, those evil people, those people that are member of the majority/ They’re the ones that are making it tough for Castro! They’re the ones that are making it tough for us to normalize relations and be able to send welfare down there.’

That’s how they look at this. So learn it, love it, live it.