RUSH: All right, back to the archives. I want to return to the archives of this program and the audiotape from Monday, February 5th, the day after the Super Bowl. This is Jim Nantz of CBS, interviewing the winning coach of the Super Bowl Champion Indianapolis Colts, Tony Dungy. 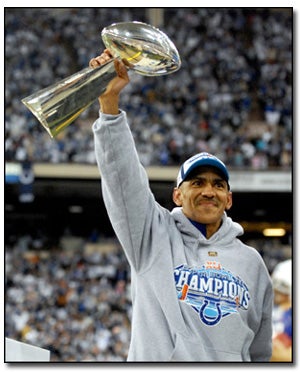 DUNGY: I’ll tell you what, I’m proud to be representing African-American coaches and to be the first African-American to win this. That means an awful lot to our country. But again, more than anything — I said it before — Lovie Smith and I are not only the first two African-Americans, but Christian coaches showing that you can win doing it the Lord’s way. We’re more proud of that. RUSH: And I said this following the airing of that bite… RUSH ARCHIVE: Dungy said he was proud to be a Christian coach, mentioning the strong faith of not only himself, but Lovie Smith, the coach of the Bears. They ‘won the way the Lord asked them to.’ These remarks were, I think, the mark of a true person of faith, because for such people their religious identity transcends their race or their politics or their gender, and every other distinguishing feature. It’s clear from the way that Dungy lives his life and the kind of person he is, that his distinguishing feature is indeed that he’s a Christian. I’ve been looking at the Drive-Bys today to see if there’s any reference to this. I hadn’t found any reference to this. It embarrasses the Drive-Bys. ‘Oh, I wish he hadn’t said . We’ll focus on a black coach thing.’ I got a note from a friend who said, ‘How long is it going to take the NFL to apologize to the world for the references to God in the post-game show?’ RUSH: Well, there has been some excrement hit the fan. Dungy attended a fundraiser for an organization that is opposed to gay marriage in Indianapolis recently and this has caused a blogger from the Washington Post to unleash. Tim Graham of NewsBusters.org has the story: Wash Post Blogger: Tony Dungy’s Religion Just like 9/11 Aggressors and Racists. ‘Though Dungy’s position may not constitute ‘gay-bashing’ per se, it certainly implies that homosexual Americans are not entitled to the same rights as heterosexual citizens, much the same way as conservatives have in the past condemned mixed racial marriages in support of ‘family values.’ Moreover, the pretext of acting on ‘the Lord’s behalf’ has for millennia been used by some as an excuse for the most unholy acts, among them 9/11. ‘Though supporters of Dungy are quick to point out he is only ‘exercising his First Amendment right,’ so too, then, are those who advocate for racial purity, ethnic cleansing and drinking the Kool Aid. The bottom line is that by disenfranchising a group of citizens because of his religion, Dungy is essentially placing the values of church above the rights of the State. Even though he is entitled to that opinion of inequality, the government is not entitled to act upon it. And while, as some have said, Tony Dungy’s Super Bowl triumph illustrated how black people are capable of anything white people are, his comments seemingly reinforce that discrimination is among those capacities.’ So Tony Dungy — a self-confessed and witnessing Christian, before the nation in victory after the Super Bowl — has now been called a racist (or at least a bigot by a blogger at the Washington Post) stemming from his open admission that he is a Christian first and an African-American and everything else second. Emil Steiner is the blogger at the Washington Post who wrote what I said. I just want to share this with you because it’s again evidence of my being on the cutting edge of societal evolution.