RUSH: John Edwards — we alluded to it earlier today — is getting a significant bump, fundraising and poll rating bump, after his press conference a week ago yesterday, with his wife, Elizabeth. I just want to review this, folks, because, once again, I, your host, am the singular focus of attacks for pointing out that that might happen and that the Drive-Bys were looking at it that way when they still are. So here is Howard Fineman, which got my whole mind-set on this started. This was Thursday after the press conference, this is part of what he said after the Edwards press conference. FINEMAN: Looked at politically, diagnosed, if you will, politically, that was a ten strike of a press conference. They showed guts. It was nothing short of remarkable and somewhat unexpected, and it’s always great when something unexpected happens around here. 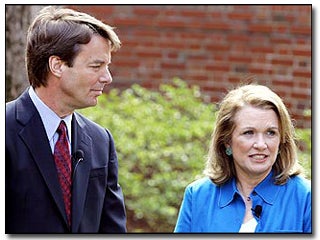 RUSH: What was unexpected was that the reports earlier were that the campaign is going to be suspended and they decided, nope, going to keep going, this is what I said. I predicted this after the Edwardses made their announcement. All during this, despite warnings from my frightened staff, despite the staff saying don’t do it, Rush, don’t go there, don’t say it, you’re going to get in trouble. I persevered. RUSH ARCHIVE: I think what the Edwards campaign is going to do here is see what the reaction is within the ranks of Democrat voters as far as this announcement today is concerned and then go on from there. If there’s not a big jump, if this doesn’t cause a breakout, if this doesn’t cause a big up-tick then at some point Senator Edwards will probably have to suspend the campaign, depending on the health of his wife if she goes through treatment for this. Now, I just wanted to put that out there, because everybody — you know, I should have predicted this before the program, what I thought, that they wouldn’t get out of the campaign. And I used these exact words, folks, to three people last night and one person this morning. ‘This campaign goes on because of love of our country that we both have.’ Those exact words were uttered today by Senator Edwards. So we’ll see if there’s a bump from this. And you say, ‘Rush, how could you be so callous?’ Hey, folks, politics, politics. I’ll tell you right now, if you went to a website that tracks news hits, you’d find that Edwards is at the top of the AP news hits, probably had more hits with Edwards today than I had with Arnold Schwarzenegger yesterday, and I had hits all over the world with this. I was stunned. For somebody so irrelevant as I am, there were reports on the Schwarzenegger thing with me in Russia, in India, all over the world, 160 different news sources in this country alone. Edwards is going to get much, much more than that out of this. And campaigns are what they are. RUSH: And of course all during this I could see them waving me off on the other side of the glass, ‘Don’t do it!’ They’re in the IFB, ‘You’re going to get in trouble. You’re going to get in trouble, don’t say it.’ But I knew what I was talking about. Howard Fineman proved it. Then this morning on the Today Show, the whole subject of the Edwards bump was discussed. And Tim Russert, like Fineman, points to the news conference as the turning point. Meredith Vieira said, ‘How about John Edwards after he announced that he’s staying in the race, despite the fact that his wife’s cancer has returned, his numbers actually went up according to a TIME poll, up nine points, are you surprised by that, Tim?’ RUSSERT: Some of his opponents have accused him of exploiting this issue, but right now it appears that the American people have said, ‘We heard you; we listened to you; and we in large part agree with your decision and we’re taking a new and interesting look at your candidacy.’ The way they conducted themselves at the news conference I do think created a bond with the viewing public. You know, it’s rare to see a politician out of the setting of answering political questions, and this was real human life, real life and death situation, everyone has been affected by cancer. RUSH: I’m just playing these bites because I predicted this despite warnings from a frightened and cowardly staff — well, cowardly is going too far. Guarded, guarded staff. So right again, I mean you heard me say that there’s a big jump going to go on, and we all knew there would be a big jump. That was not hard to say.