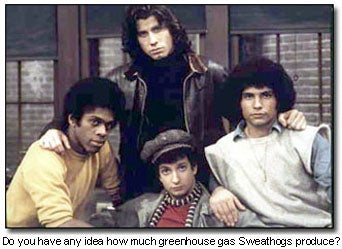 RUSH: Now, this is typical. John Travolta owns five airplanes. He’s got a 707. He’s got some Gulf Streams. I forgot what the fifth airplane is. He’s out there saying people need to do their bit to stop global warming. He says (paraphrasing), ‘Well, look, I need five airplanes because the movie business means I travel a lot.’ airplanes, including a Boeing 707 that he got from Qantas. He flies all these. He’s an excellent pilot. I landed at Teterboro once, and there was this G2, a Gulf Stream 2, and this airplane was not parked in any semblance of order.

They always line these things up in a row when you park. This thing was just smack-dab in the middle. I said, ‘Who the hell’s plane is that?’ And the line guy said, ‘That’s Travolta. He lost all electrical coming in from Washington. He just dove down here and he pulled up and got out and left.’ Just left the plane where it was. (Laughing) He’s an excellent flier, but this is typical. He’s urging everybody else to do their part while he’s running around flying five airplanes. I don’t care because I don’t think it matters. It’s the hypocrisy that these people are going to get away with their, ‘excessive carbon footprint’ lifestyle, go out and buy these carbon offsets, which are a scam, and they don’t reduce their carbon footprint at all. They just say some clown’s gonna plant a bunch of trees to make up and absorb all the pollution they’re putting out there. It’s, frankly, a scam and an absurd thing. We’re going to start selling our own carbon offsets here called liberal offsets, or any kind of offsets at the EIB Network on our website. We’re working on that.