Voter to Edwards: It’s All About Me

RUSH: And there, ladies and gentlemen, is the answer to the question you were asking me yesterday. You think this is not a prime sponge to soak up all of this tripe that she hear and reads? She already has soaked it up. ‘Give me something.’ You, Mr. Edwards, give me something. ‘It is about me,’ she said. She’s not even a baby boomer. You could understand this if it was a baby boomer saying this. Here is the answer that came from John Edwards, and it was pathetic. So Elizabeth has to jump in here and save the day and the answer.

EDWARDS: God bless you. If I were choosing a president, uh, that’s what I’d be doing. I’d be looking for the specifics of what they want to do, because that matters, but I would also be judging them personally, because we need to trust our president.

EDWARDS: You see now why I let her tag along to these things.

RUSH: I have to take a break, but this is worth… I could do an hour analyzing this answer, not her question. I could do an hour analyzing Edwards, not even his wife. He just heard this woman say, ‘It’s about me,’ and he turned around, his answer to her was: No, it’s about me. (Laughing.) But let’s go back. This is not a first. Shall we go back to March 30th, 1993, from my Television Show, I played this sound bite from October 15th of 1992. This was the presidential debate, Perot, Clinton and Bush 41 in Richmond, Virginia.

RUSH: That’s the famous Ponytail Guy from the Richmond debate in 1992. These presidential candidates are our fathers, the president’s going to be our father, and what can we expect from our father, you, to meet our needs? This is just another way of wording the same question you just heard from Jenny Ballantine at the University of New Hampshire.

RUSH: I want to put out an all points bulletin for Jenny Ballantine, who participated yesterday in Durham, New Hampshire, the town meeting for the Edwardses at the University of New Hampshire. Because Jenny Ballantine, if you are there, or if anybody in the audience knows Jenny Ballantine, I would love to genuinely discuss your question, your comments to the Edwardses. I don’t have a tape of the entire answer that you got from the Edwardses. Whatever they said is not relevant. This is not going to be about them. Jenny Ballantine says at the end of her question, ‘It’s about me. It’s about me voting for you or supporting somebody who’s going to be the next president, so it’s all about me right now.’ Jenny, if you want it to be about you, I would love to talk to you about you, on the up and up. You represent, Jenny Ballantine, a portion of the population of this country that has a lot of potential, but nobody’s told you, and you’re relying on others for this potential, and it’s a sad thing. 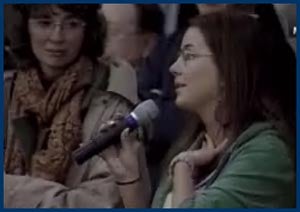 I don’t know if it’s the relativist society that we live in or whatever it is, but if anybody out there in New Hampshire knows this Jenny Ballantine, please get hold of her. We want to talk to her at 800-282-2882. Seriously, non-confrontationally, she deserves to have answers. She’s obviously got questions. She has angst. She has dilemmas. She has a clouded view of her future — and she, frankly, needs a little inspiration, and it doesn’t sound like she’s received much in her life. I would crave, I would welcome the opportunity to talk to her about the things that she mentioned to the Edwardses, and again, the conversation I have with her, if it happens, will not be about the Edwardses, won’t be about Republicans or Democrats, it won’t be about the presidential race. It would have nothing to do with that. I must say, though, that Edwards answer… I don’t even know if he heard what she said.

‘I’m busting my ass going to school. I work 25, 30 hours a week. It’s just me and my dog. I need to know there’s not going to be any racism or sexism, prejudice, or hate. I need to know that I matter, that I wasn’t just dumped in this world for no particular reason whatsoever.’ I can’t tell you how that makes me feel, to read that somebody thinks of herself as being ‘dumped in the world for no particular reason.’ That is… I don’t know. Sad. It’s terribly sad. But Edwards’ answer was, ‘Well, God bless you. If I were choosing a president, that’s what I’d be doing, I’d be looking at the specifics of what they want to do because that matters, because I would also be judging them personally, because we need to trust our president.’ I mean, there’s one clich&eacute; after another in this answer, and Elizabeth had to step in there and save the day and make the answer about this woman, because Edwards was making it about himself. He has an excuse. He’s a baby boomer. Plus, he’s running for president. That is one of the most telling exchanges, and it’s one of the most vapid. It’s transparent. It was just totally empty, and it’s left a gnawing in my gut to try to fix it.