Dim Bulb Pelosi Steps in It


RUSH: The big news today, I guess (there’s so much of it) is Nancy Pelosi, the speaker of the House. Let me take you back to what I said yesterday on this program. This was tough to say, folks, as I mentioned leading into this comment.

RUSH: For her years and for her experiences what she’s pulled off here is over the top. It turns out that she came out and she made a statement. She probably announced that she had told Bashar Assad that Ehud Olmert of Israel was ready to talk peace. This is what she said yesterday afternoon after she had met with Assad.

PELOSI: The meeting with the president enabled us to communicate a message from Prime Minister Olmert, uh, that Israel is ready to engage in talks as well.

RUSH: There’s a little problem with this, Olmert did not authorize her to say such a thing, and he doesn’t believe such a thing. They’re not going to talk peace with Syria until Syria renounces its state sponsorship of terrorism. Now, it was bad enough that Pelosi offered a photo-op credibility to Bashar Assad and the other leaders of Syria, the people who run state-sponsored terrorism. They’ve been linked to the assassinations in, and attempted destabilization of, Lebanon. They coddle Hezbollah. They’ve thrown in their lot with Iran and Mahmoud Ahmadinejad. It’s bad enough when Pelosi pulled that Gucci scarf over her head to make a hijab, although that might be something that’s excusable. That was observing a religious custom as she went into a mosque. A lot of people would do that. But then she can’t even get it right. Now, here she is. She’s not even empowered to conduct foreign policy. She’s the speaker of the House, and foreign policy does not come under the purview of members of Congress even if they are speaker of the House.

But she couldn’t even get it right when she tried to convey a message from Israel to Syria, and she forces Olmert to put out a clarification that exposes her incompetence, and that’s what this is. You can’t say she’s trying to massage things. You can’t say she’s trying to mobilize and get started the peace talks. This is just… You have to chalk this up to incompetence. You might say duplicity. It really doesn’t matter whether she was deliberately deceitful or just hopelessly na&iuml;ve and inadequate. This is just an ugly scenario, and it’s embarrassing, and I talked to some people in Great Britain today, and the news that their 15 sailors and marines are back is secondary to this news of Pelosi having to be corrected by the Israeli prime minister. Even the Washington Post today weighs in with an editorial: ‘Pratfall in Damascus — House Speaker Nancy Pelosi (D-Calif.) offered an excellent demonstration yesterday of why members of Congress should not attempt to supplant the secretary of state when traveling abroad.’

They go on to detail what happened, and they say, ‘Only one problem: The Israeli prime minister entrusted Ms. Pelosi with no such message. ‘What was communicated to the U.S. House Speaker does not contain any change in the policies of Israel,’ said a statement quickly issued by the prime minister’s office [in Israel]. In fact, Mr. Olmert told Ms. Pelosi that ‘a number of Senate and House members who recently visited Damascus received the impression that despite the declarations of Bashar Assad, there is no change in the position of his country regarding a possible peace process with Israel.’ In other words,’ as the Post writes here, ‘Ms. Pelosi not only misrepresented Israel’s position but was virtually alone in failing to discern that Mr. Assad’s words were mere propaganda.’ Everybody else understands what this guy is all about. She doesn’t. Folks, I’m just telling you again where this stems from. They’re trying to isolate President Bush and trying to make him look more and more irrelevant, and in the process, Pelosi is trying to infuse her own version of liberalism into foreign policy which is based on this premise:

The only enemy in the world today that the US has is George W. Bush. There is no war on terror. They’re even going to strike that language from the with defense appropriations bill for fiscal year 2008. There is no ‘war on terror.’ If it weren’t for the fact that Bush went over to Iraq and Afghanistan and started kill Muslims, why, they wouldn’t even dislike us! So people like Pelosi honestly believe — having grown up with conflict resolution class after conflict resolution class — that all we have to do to go to bad people, evil people, the bad guys, the enemies, to convince them to like us is to go say, ‘Look, we love you, and we understand your problems, and we want to get along, and if you’ll just be patient and wait for us to get full power in Washington, and get rid of President Bush, then we can do business.’ Of course, Assad recognizes a sap when he sees one as does Ahmadinejad or any of these other Islamists. They recognize a sap when they see it. You think Assad would rather be dealing with somebody like Pelosi in the White House than somebody like Bush? You think bin Laden would? You think Ahmadinejad would?

Of course! They have actively campaigned, publicly so, with statements to the worldwide media, hoping Democrats win the election in 2006 and they’ll do so again in 2008, and Pelosi doesn’t understand this. There is an arrogance and a condescension about liberals like Nancy Pelosi who think that the power of her personality and the desire for goodness and kindness and love, can change these renegades into people we can do business with, and they just recognize her is the sap that she is, give her whatever she wants, allow her to go out and claim victory. The Post concludes, ‘Never mind that Pelosi’s statement is ludicrous…’ By the way, the statement they’re referring to is this: ‘We came in friendship, we came in hope, and we came determined that the road to Damascus is the road to peace,’ and that is sophistry. That’s the kind of thing you’d get from a Miss America contestant or a National Honor Society candidate. ‘Never mind that that statement is ludicrous: As any diplomat with knowledge of the region could have told Ms. Pelosi, Mr. Assad is a corrupt thug whose overriding priority at the moment is not peace with Israel but heading off U.N. charges that he orchestrated the murder of former Lebanese prime minister Rafiq al-Hariri.

‘The really striking development here is the attempt by a Democratic congressional leader to substitute her own foreign policy for that of a sitting Republican president.’ The Post is exactly right about this. ‘Two weeks ago Ms. Pelosi rammed legislation through the House of Representatives that would strip Mr. Bush of his authority as commander in chief to manage troop movements in Iraq. Now she is attempting to introduce a new Middle East policy that directly conflicts with that of the president. We have found much to criticize in Mr. Bush’s military strategy and regional diplomacy. But Ms. Pelosi’s attempt to establish a shadow presidency is not only counterproductive, it is foolish,’ and it has become a focal point. Folks, this is the kind of thing with which the Democrats are sowing their seeds for an eventual landslide defeat, and in their condescension and their arrogance they don’t see this. Trust me on this. You people have been upset all week about how it is that this kind of stuff goes uncommented upon, unnoticed, by what you think are a majority of the American people. Believe me, this gets noticed, even the Drive-Bys are all over this one today. 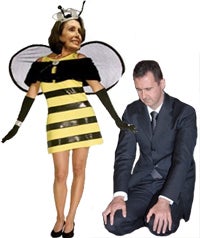 RUSH: Shane in College Station, Texas, I have about a minute and a half before we have to go. I wanted to welcome you to the program. Hi.

CALLER: Thank you, Mr. Limbaugh, fighting Texas Aggies dittos to you and your staff.

CALLER: Yes, sir. My question is, Nancy Pelosi, the third highest member of our government, has gone to Syria and they basically used her as a pawn. My question, though, is where is the outrage from the Jewish community and the Israeli descendants or any population therein, that a representative of our government has gone over there and according to Syrian newspapers, at least twice agreed to the fact that peace can only be achieved after Israel returns occupied Palestinian’s territory?

RUSH: I’m running short on time. I wouldn’t call it outrage, but, look, this is something the Drive-By Media doesn’t ignore. It’s all over the place that Pelosi’s in trouble. Pelosi has made a fool of herself. The Washington Post is leading the way, and some of the Drive-By cable networks, but you have to understand something. You asked why hasn’t there been any Jewish outrage over this. You have to understand something about liberals, Shane. They are liberals first. Whatever else they are, be they feminists or Jewish, they’re liberals first — and liberalism, akin to being a religion, will always triumph when it comes down to it. So Pelosi’s a lib. They’re going to stand by her. They’re not going to throw her under the bus.