RUSH: I went to the cigar dinner on Thursday night at the Four Seasons in New York, and I was asked up to the podium to speak as I always do and I walked to the microphone and said, ‘Ladies and gentlemen, I’m not allowed to speak. My remarks have not yet received clearance from the Reverend Jackson and Reverend Sharpton.’ I’ll tell you a true story. Arnold Schwarzenegger was there. He came by after a fundraiser and he was seated at table one, our table, and we shared a cigar and so forth, and relived the magic moments.

‘I want to do your show again. I want to come back on your show. It was cool. It was fun.’

I said, ‘Well, you’re welcome to come back any time.’ Rudy Giuliani was there, but there was nothing political about the night. It was all a fundraiser for the Michael Milken Prostate Cancer Foundation. This was our 15th annual, and I have made each and every one of them. I just had a great, great time. Marvin Shankin and his excellent staff and crew of people at Cigar Aficionado have put this on, and he really is the driving force behind it. Julian Niccolini, who is the owner and operator of the Four Seasons, puts on a great thing. We got a one-night exemption from the smoking ban in New York. You can apply to the board of health and you can get an exemption, and for the second year in a row they said, ‘Well, you can smoke but not ’til after dessert,’ so we served dessert first. Here you have a thousand people; they’re showing up and the express purpose it to smoke cigars, and the Health Department says, ‘You can’t smoke them in there ’til after dessert.’ They did allow smoking in the reception, cocktail hour prior to that over in the bar, but not in the poolroom. The grillroom is where the reception was.

RUSH: A couple Arnold sound bites I have here in the roster. He was on Hannity’s America last night on the Fox News Channel, and I’m guessing that he taped this, because I don’t know if Arnold was still in New York. I think he taped this. I was with Arnold on Thursday night, and he keeps talking about, ‘Yes, I’m going to have to smoke stogies with Rush. We’re good friends.’ It’s what I want you to hear. Hannity’s question, ‘You had a big brouhaha with Rush Limbaugh, said he was irrelevant, went on the show. Are things better now?’ 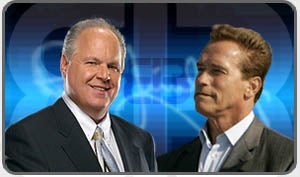 SCHWARZENEGGER: You know, the bottom line is just that I have nothing against Rush Limbaugh. You know, he and I, we are friends, and we have a lot of things in common. It’s just that the things that he’s talking about on the show, is about his philosophy and the things I’m talking about is getting things done. Two different objectives.

RUSH: So Hannity said, ‘Well, look, is it fair to say now that you went on the show that you’re friends again and you made up?’

SCHWARZENEGGER: He understood what I was saying. That his opinion of what he is saying is not going to tie to what I am doing at the show. Those two things have absolutely no relationship. I enjoy his show. I’ve talked to him many times. I am going to see him tonight again at the fundraiser for cancer, prostate cancer. We smoke a stogie together, all of those things. So we are fine. The media made much more out of it than was really there.

RUSH: Well, I told the story again on Thursday night, and I said, ‘I know exactly what happened here. He goes on all these shows and my name gets brought up, and he gets sick and tired of hearing, ‘Limbaugh thinks you’ve fallen out. You’re not a conservative. You’re a traitor. You’ve sold out” He’s hearing about all this, so he finally blurted out (paraphrased), ‘Rush Limbaugh is irrelevant. You’re all irrelevant.’ and I knew exactly what he meant. He said, ‘I don’t care what anybody thinks, I got a job to do here as governor of California. I’m going to do what I think needs to be done, how it needs to be done. I don’t care what anybody thinks. Limbaugh is irrelevant to what I’m trying to do as governor of California,’ and given what he’s trying to do as governor, I’m glad I’m irrelevant, but all that said, there was no feud or any of this. See, these things get their lives, and they just don’t go away. The story has a life. He’s going to be asked about this, ‘How’s the feud with Limbaugh?’

RUSH: Tampa, Florida, this is Matthew. Matthew, it’s great to have you with us, sir. 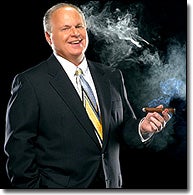 CALLER: I was sitting at lunch last week and I was enjoying a La Flor Dominicana Ligero —

CALLER: I was actually wondering about this annual cigar dinner you tell us about every year, and I was wondering how a fellow evil Big Tobacco-supporting conservative like myself might be admitted next year.

RUSH: Well, what you have to do is get hold of Cigar Aficionado because they start talking about it far out. It’s a monthly magazine — well, every couple months, I think — and they mention as we get close to the date when it’s coming up. Tickets are a thousand dollars. It’s tax deductible because it goes to the Prostate Cancer Foundation. It’s black tie, so if you get your money in soon, there are people there from out of town every year, people I haven’t seen before. So it’s not a closed list. It’s just 800 or a thousand people, whatever they can squeeze into this room.

RUSH: Well, the reception starts at seven. You get out of there at midnight. There’s an auction. The evening leads off after we’ve moved into the dining room. Marvin goes up to the podium and says, ‘Okay, we’re going to auction off our first items tonight,’ and there are like six bottles of wine wrapped in paper bags. You don’t know what you’re buying and the bidding starts with the bottles of wine. They’re usually magnums or double magnums. You have ten people because the rule is you have to open it that night and serve it at your table when you buy it, and I always buy the first bottle whatever it is because it’s become a tradition, and then it goes from there, and then you eat the appetizer course or desert in our case first, whatever, and then the other auction items pop out. There’s a nice little catalog explaining the auction items and various people come up and make brief, short comments, and we had Rudy. We had Arnold Schwarzenegger. Jeff Greenfield got up and made some remarks. Shankin, of course.

I always get up and say a few words. It’s just a fun night, and the great thing about these cigars is that they bridge all these gaps, all these ideological, political gaps. It’s not a political night at all. It’s just people who have that one thing in common, and plus it’s a beleaguered group. We’re all under siege because we’re smokers.

RUSH: Everybody is trying to wipe us out, and we’re getting together as a form of solidarity. So it’s a fun time. You would love it if you could attend one. Just get a subscription to Cigar Aficionado or pick it up at a newsstand starting late this year. It was late this year. It was April 12th. Normally it’s the first week of April on a Monday or Tuesday. But this time it a Thursday for the first time in a long time. It had to do with the availability of the room and I’m sure had to do with the Board of Health and when we could get the one-night exemption to light up and all that.