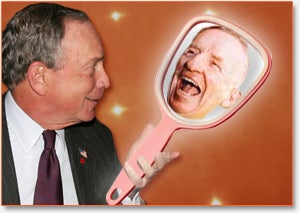 RUSH: Michael Bloomberg, the mayor of New York, hs put aside $1 billion to run for president. This is Ross Perot on steroids, folks. He wants Chuck Hagel as his running mate, or Hagel wants to be his running mate. Don’t laugh at this. A billion dollars! He’s got millions more than that, billions more than that. This is going to be interesting. This is a guy on a trans-fat ban, smoking ban, green up the city. Is the country really ready for somebody who absolutely believes in our freedom to abort babies, but not to smoke or eat trans-fats in public? We’ll find out. That’s why I say, it’s so early, folks.

‘Rush, which candidate you support?’

I don’t know. Nobody yet. It’s too early. There are five hundred days ’til the first primary vote. Anything can happen, and this is just an example of it