RUSH: I read my e-mail, and I know that a lot of you people are… Well, I don’t know if you’re angry, if you’re frustrated, but look, I can read between the lines even in e-mail. Such e-mail subject lines as: “So, what are you, the new Johnny Carson, four days a week?” “Are you sick?” “You keep leaving. What’s wrong?” “How come you’re missing so much time?” Ladies and gentlemen, I have allotted myself, as the CEO of EIB, unlimited vacation time. I take it whenever I wish. Now, you wouldn’t like it if I took two weeks straight. I don’t ever take two weeks. Very rarely have I done that. I take a day here, a day there, so that my absences are not prolonged because I miss you people too much when I’m not here. Now, yesterday I had a golden opportunity. I had an invitation, and yesterday was the only day that I could do it, and if becoming CEO of your own company is not enough to allow me to make decisions like that, I don’t know what is. I’ve reached a certain pinnacle here. It’s America! The country is not going to die with me not in the Attila the Hun Chair for just one day. 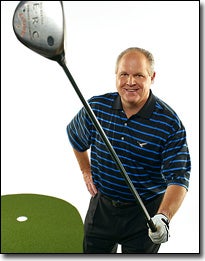 I was invited with some friends to go play Oakmont yesterday in Pittsburgh, which is the site of this year’s US Open. I lived in Pittsburgh in 1973 when Johnny Miller won the US Open with a final-round 63 on Sunday coming from a way behind in the pack. I’d never been there. I don’t even remember the course from watching it on TV back in 1973. I didn’t start playing golf ’til 1997, so I didn’t spend a whole lot of time watching it. But Bob Ford is the pro at Oakmont. Twenty-six or 27, 30-some odd years he’s been there. He’s also the pro at Seminole down in Florida, north of where I live — and that’s where I played on Sunday. He invited us up about a month or two ago and gave us a date range, and they were all during the week. They’re trying to limit some play because they got The Open coming up. I just had a great time. It’s probably the hardest golf course that I’ve ever played. I shot a 94. I’m going to tell you, for you people that play golf, this Oakmont was probably the golf course that made me appreciate — and I always have appreciated the talents and skills of professionals, but this course makes me appreciate it all the more. The greens there are impossible. The rough is way up. The fairways are narrow. They’ve taken out 4,000 trees, which is good. I don’t know about for the environment, but they took out 4,000 trees so you don’t have to hit in a bunch of trees, but the rough makes up for that. It was just a gorgeous golf course.
The membership out there could not have been nicer. I was walking in the clubhouse and out on the veranda before and after. Pittsburgh, you know, I lived there and it’s home of the Steelers, and I’ve got fond memories. It was my first big city away from home. But it’s also a big Democrat town. It is, and always has been. It’s a big union town. The membership, the people, were just as nice as they could be. My caddy, Danny, siad, “Are you gonna talk about your trip to Oakmont when you get back on the air?”
“Oh, yeah, I’m going to lead off my program.”
“Have you had a good time?”
“Oh, yes, of course!”
You could tell we were having a great time. Bob Ford and I teamed up against my other two buddies, and we cleaned their clocks. The match was over at the 14th hole, so it was just a great time. I want to thank everybody up there, and Bob Ford especially for setting this up. As I say, folks, it’s a unique opportunity, and I’ve been very lucky, thinking about these golf course — (interruption) What? Who said something? What do you mean “in for it now”? Where have you been? Did you just sit down, Snerdley? I have been addressing the fact I know people are going to say, “You keep talking about golf. Stick to the issues.” My friends, look, I am not going to allow this program to be reshaped or formed. It has always been me talking about as much of my personal life as I feel like volunteering. It’s less and less and less over the years, but, like I told you last Friday, I love sharing my passions with people. That’s just something I like to do. I wish I could have taken all of you who play golf with me, but I couldn’t, so I’m telling you about it. I want to thank the people that made it possible. I’m just being a nice guy here. We’ve got two hours and 46 minutes left here to get to the issues.