RUSH: I gotta tell you a funny story that happened last night. As you know, we’re here in New York. I’m coming to you today from high atop the EIB Building in Midtown Manhattan. I told you about this Kobe Club steakhouse, Jeffrey Chodorow’s place. I went to it two or three weeks ago when I was here, and I absolutely loved it. I had a great time. I went in there last night and they told me a slew of people have come in to check the place out. I was with the woman who poked me at dinner last Thursday night in Palm Beach when I was answering a question posed by the host. I told you that story on Friday. She was treating me like a wife, and we’re not even married. I just met her that day. In fact, the two people… I’ll tell you what I did. The two people who were at the dinner party, I’m not going to name them, but they’re big donors and supporters of both Bill and Hillary Clinton. They were at that dinner party. The question involved, that I was asked by the host (he was trying to stir things up) was about Hillary. I’m not trying to cause problems. It’s a social evening. It’s a dinner. I’m a gentleman. So I gave an answer that I thought was extremely diplomatic and funny and warm and non-confrontational, because I’m not that kind of guy. 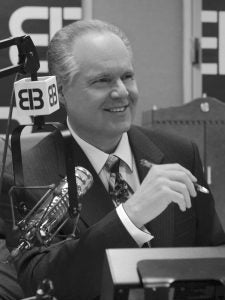 That’s when she poked me. I liked her poking me even though we’re not married, because we’re not married and she couldn’t do anything about it. So I went to the website and I got a picture of those two people who were at the dinner party and I had my website people frame it and when we got to the Kobe Club last night, I pulled the picture out of my jacket pocket, in a small frame, and put it on the table. I said, “Okay, if I get going, they’re here again tonight. You can pinch me all night if you want to.” We’re engrossed in conversation. It was very noisy in there last night, and I was having difficulty hearing. I was not looking around the restaurant. I was as close to this woman as I could get to hear her because of the racket. I got in there at about seven, and I’m guessing at eight or 8:30, I’m looking at this woman, talking to her. She’s looking at me, not aware of anything else going on in the restaurant, and all of a sudden I become aware of a looming presence at the table. I’m seated at a booth, a half-moon kind of booth, and I’m facing the entrance to the restaurant, toward the back.

This looming presence, I look up, and, golly, if it isn’t former President Bill Clinton. He’s got a big smile on his face, and I look up, and I imagine I was somewhat startled. I looked up, and I couldn’t hear what he was saying because of the noise in there. So I’m turning my head, my left ear to him so I could hear a little bit more, and he said, “You’re looking great. You’re tan, fit, you look very good out there.” I reached out my hand, “Mr. President, it’s a pleasure to meet you.” We shook hands and so forth, and he hung around for I guess two or three minutes, maybe five. I lost track of time. Then he and his party went and sat at a table behind me and to the left.

The woman I’m with is saying, “Whoa! Does this happen to you all the time?”

So about ten minutes later I become aware again of another looming presence at my table, and I look up, and it’s former President Bill Clinton. A second time, he has stopped at my table. The first time he stopped while walking in. The second time he actually left his table, came to my table, and he’s got another guy standing with him, and the guy looks familiar, but I can’t place him. I can’t hear the introduction.

It turns out it was the mayor of Los Angeles, Antonio Villaraigosa, and so we chatted for a while, and while I’m chatting — now, this is hilarious. While I’m chatting with Villaraigosa, I kind of slid to the right in my half-moon booth, and as I did that, that created some distance between me and my guest. I’m talking with Villaraigosa, and when I’m talking to somebody in a very loud place like this, I have to devote full attention. I had to turn my head to my left, away from the action behind me, to hear what the mayor was saying. At some point during the conversation with the mayor, I looked to my left, and the former president was intently chatting up the woman that I was sitting with. He had leaned down, and his elbows and arms were on the railing of the booth, and they were in intense conversation. 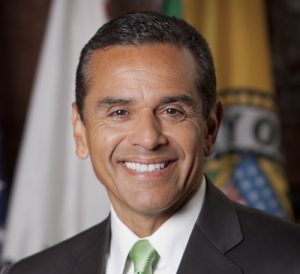 I chatted up Mayor Villaraigosa some more, and then he left and they both went back to the president’s table. Then they left. They left I guess about five minutes before I ended up leaving. As they left, the president had a friend with him. The president didn’t come back to the table when they left but Ron Burkle was also in the president’s group, and he stopped to say hello. So I stood up and said, “Hello, Mr. Burkle.” I’m very familiar with Ron. He’s a big Los Angeles guy and so forth, and then they left. I guess it was ten minutes, as I say, or so after that, I left. As I get to the front door, there is a photographer out there in the street and the flash is going crazy, taking pictures, and I said, “Whoa! Why didn’t I think of this?” I knew this was going to happen. Clinton is up the sidewalk a little bit, chatting with somebody, and when I walk out the door, the photographer sees me and aims his camera at me and starts flashing pictures away.

Now, the former president is probably about ten feet up the sidewalk, and I decided I’m going to go up, shake his hand and say good night. Because I’m a gentleman, I’m not just going to walk out there and ignore him. So I did. I walked up. I asked him what he had to eat.

He said, (Clinton impression) “I had chicken. I had fish. That’s what we had.”

I got home and I sent an e-mail to some friends. I recounted the story pretty much as I’ve recounted it for you, and I told them, I predicted, “Now, you wait ’til this hits the papers. When it hits the papers, it will be the other way around. I approached the former president, and all of this sort of stuff — and I did, outside the restaurant.” I walked out and the photographers were there. In fact, I said to the woman I was with, “Okay, let’s give them a picture.” She didn’t want to be in the picture. She just made a beeline for the car, but I walked up and said good night to the former president. By the way, all this was like two old friends getting together. It was idle chitchat and smiles all around from the mayor of Los Angeles, from Ron Burkle and from the president himself. 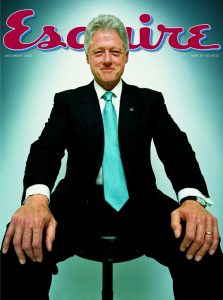 There was no tension about any of this. It was a good time, and I enjoyed it. I enjoyed it — especially when I looked over and I saw the former president intently chatting up the woman that I was with. (Laughing.) It was cool. So, anyway, somehow Matt Drudge heard about this today. So he’s had it blurbed on the Drudge Report for I guess an hour or two. He said that he’s been talking to “sources close Clinton” who said, “No, the former president didn’t approach Rush. That would never happen. Rush approached the former president.” I predicted this. Somewhere in Clinton, Inc., that’s the story. I did approach him outside the restaurant when I was leaving to say good-bye. I’m not just going to ignore him on the sidewalk there. They had photographers taking pictures of that, I’m sure, but I was minding my business. I didn’t even know he was going to be there. I was minding my own business like always, bothering nobody, sitting in the restaurant. When he stopped at the table, that starts this whole story. Then he brought the mayor over, and then Burkle came over, and it was amazing.

By the way, there were people in there taking cell phone pictures of me. The lady I was with had to excuse herself to go to the restroom, and at that point four or five people in the restaurant came over and wanted pictures and autographs and this sort of stuff. When my guest came back those other people then stopped coming over. But there are witnesses to this, is the point. There are countless witnesses. (interruption) What was that, Mr. Snerdley? There is no “rest of the story.” What kind of rest of the story do you think there would be? There is no rest of the story. No, no, no, no, no.

I asked Villaraigosa, “What are you doing here?”

He said, “Well, Clinton has his green initiative.”

They were working on global warming at some Clinton conference yesterday and they had all come to the Kobe Club for dinner. I don’t believe in coincidences with the Clintons. I just don’t. Of all places he chooses to go to dinner, the Kobe Club the same night I’m there?

RUSH: I remember telling you this in the early to mid-nineties, “Bill Clinton is the kind of guy that you probably would love to go to a ball game with, chase women afterwards and have a great time.” I’m already getting e-mails, “You’re falling in with the enemy. I knew it! It happens to every one of our conservatives. They get famous, and fall in with the enemy, even you.” What am I supposed to do, folks, when he comes to my table? Am I supposed to stand up and leave? Am I supposed to turn my back? What am I supposed to do? I’m not that kind of person. You people need to relax out there, some of you. Not all of you are uptight about this. Some of you need to just lighten up out there. I can’t help it if I go someplace and this kind of stuff happens.